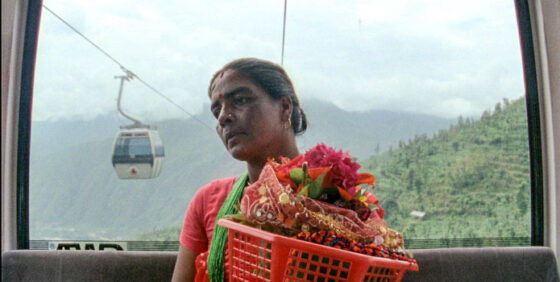 Pilgrimage is premised on the idea that the sacred is not entirely immaterial, but that there is a geography of spiritual power. Pilgrimage walks a delicate line between the spiritual and the material in its emphasis on the story and its setting: though the search is for spirituality, it is pursued in terms of the most material details…

Of the few material offerings appropriate for pilgrims who worship the Hindu goddess Bhagwati at Manakamana temple in Nepal—among them coconuts, sacred thread, saffron extract, flowers, red cloth, rice, and incense—a movie camera may not be deemed particularly auspicious for the sake of worship or sacrifice. But as a means of recording those pilgrims who ascend by modern cable car, traversing 2,772.2 metres of the verdant Trisuli and Marshyang-di river valleys, the camera incidentally partakes of an essential fifth element of Hindu philosophy, that of akasha, or ether. Stephanie Spray and Pacho Velez’s Manakamana is exclusively trained and sustained on the transient inhabitants, some human, of these cable cars as they ascend to and descend from the ancient site, to little perceptible consequence. By virtue of its rigorous but playful structuring principle, however—in which what remains beyond the camera’s purview bears immensely on what is on view, and in which banality is uncommonly dignified—the film levitates toward an epistemological consideration without ever leaving its seat. After watching Manakamana, one could be convinced that the one, eternal, all-pervading substance of akasha is nothing less than an ice cream bar, melting in the helpless hands of a Nepalese elder in her earthbound descent from funicular grace.

Upon first impression, as the car emerges from the dark void of the cable car station and the viewer is subsequently perched, by way of a fixed camera (incidentally, the same camera used by Robert Gardner for Forest of Bliss [1986], shot in Varanasi), before the inscrutable presence of an elder and child, it seems as if the film’s formal conceit is taking us for a ride. Will the duration of the ascent unfold in real time, as we sit in awkward proximity to this silent couple (whom we can only assume are grandparent and grandchild) staring quizzically into the distant, unfolding landscape? And what exactly are the risks and rewards for the audience of sitting through the protracted passage, in which the cable car moves at 21.6 kilometres per hour to its destination at an altitude of 1,302 metres in roughly the amount of time it takes for a 16mm magazine of film to roll out? Like the passengers before us, we can do little but marvel, yawn, or fidget our way through the enclosed space, breathe the available air, behold shifts of light, take in the sound of birdsong carved open by the pulse of electric cable. (The directors’ collaboration with sound designer Ernst Karel, whose sonic explorations of mountain transport systems anticipate Manakamana, is integral to the film’s applied acoustemology).

Upon closer inspection, and a relaxed sense of anticipation, what may feel like cinematic anathema (the terror of inertia!) reveals itself as the blooming of awareness, of self and other, through an act of forbearance. As another field report from Harvard’s Sensory Ethnography Lab—the visual anthropology department headed by Lucien Castaing-Taylor, co-director of Sweetgrass (2009) and Leviathan (2012)—Manakamana is predicated on close inspection, embodied inquiry, defiance of genre, and an engagement with the real. Accordingly, the film does not digress from its initial formal schema: what follows are a dozen extended takes that document rides up and down the mountain, all seen from the same static, but incessantly moving, position from within the car, each transitioned by a black-out naturally furnished by the interior of the station (the mise en scène naturally entails a variation on sculpting in time, sans the metaphysical underpinning). The only variation, of course, is the content: that introductory duo is followed by a host of characters equally bound by time, the rectilinear dimensions of the cable car, and the camera’s compositional frame.

Any fears of a lapse into standard “ethnographic” style of filmmaking—colourful natives in their exotic land—are soon dispelled by the fact that all the various passengers who enter the cable car’s micro-habitat are in some way estranged: from the land below from which they embarked; from the circumambulation of a traditional pilgrimage now usurped by modern technology; or, in the case of the assorted tourists among this human cargo, from the sacred implications of the destination. “Even you, in and of yourself, may, in a sense, be cross-cultural,” state Castaing-Taylor and Ilisa Barbash, authors of the handbook Cross-Cultural Filmmaking. In Manakamana, Spray and Velez employ the travellers’ enforced proximity and shared elevation as a means to obviate certain cultural hierarchies. Suspension, here, is also a leveller: a sense of stupefied enchantment, when swaying, tethered to the ether, becomes the common element that crosses generational, gender, and cultural lines. Perhaps there is an ancient word in Sanskrit for the way ears become blocked at high altitude, but it doesn’t take an anthropologist to recognize this as a universal experience. 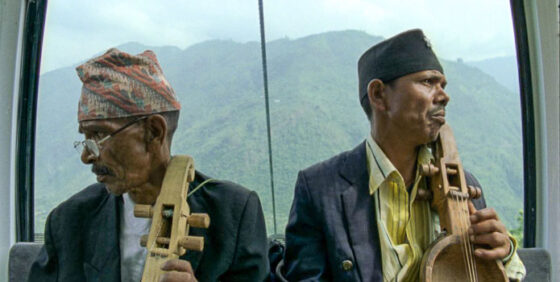 Unlike Leviathan’s suffocating immersion with its piscine protagonists, Spray and Velez’s deliberate framing of their almost exclusively human subjects (one cleverly deployed exception reveals caprine cargo) has a perhaps unintentionally humorous effect, akin to that of photographic portraiture (as well as the impassive, mannerist comedy of Tati). Characters trapped in the camera’s gaze writhe self-consciously or appear utterly indifferent, their discomfiture or amusement registered bodily. In this sense, Manakamana partakes of the real while never ceasing to be a performance; indeed, many of the subjects were cast (some from Spray’s adoptive Nepalese family, others from her 2009 documentary As Long As There’s Breath), which complicates that principle of random selection by which documentary practice attempts to confer a degree of truth to what is being filmed. The presence of the camera—and of sound recordist Spray and camera operator Velez who, unseen by the camera, sit in the cable cars opposite their subjects—intervenes upon its subjects, and this very intervention constitutes the film’s plane of reality. The influence of the camera cannot be reduced or diminished: it too belongs to the same technological realm as the cable car, both representing encroachments upon a landscape and lifestyle hitherto more attuned to the natural. Yet Manakamana is neither an elegy to the pastoral nor a critique of modernization; rather, it modestly attests to the possibility that the effects of modernization upon everyday lives and bodies cannot be precisely measured, and thereby moralized.

Just as the ministrations of the goddess whom the pilgrims come to venerate remain invisible, the temple which is their ultimate destination remains unseen throughout Manakamana. In the absence of a visible holy site, and a spiritual journey that has been effectively expedited by the installation of an electrified tightrope above a vast jungle, what remains is a surrogate commute in which the sacred and profane collapse into a detached procession, a liminal state in which congregate faithful elders bearing game for slaughter; bored rockers snapping photos and twirling their hair; co-wives recounting ancient legends and bemoaning a lack of respect; tourists halfheartedly keeping diaries of the ride; women beholding the solubility of frozen confections while attempting to consume them; and traditional musicians tuning their stringed instruments before breaking into song. From this nearly surreal and yet utterly ordinary vantage point, the old trail to the temple can be occasionally glimpsed outside the windows, like a faded scar in the landscape that invokes (perhaps nostalgically) the labours of the original pilgrimage while reminding us that time (and “progress”) wraps us in new skin.

By eliding the physical (and historical) toll of a once arduous journey, the cable car condenses ritual, and the faith commensurate to it. The question, posed of most new technology, is: Are we thereby delivered to our desired destination (whether sacred or secular) simply more conveniently, or does the very nature of our conveyance alter the nature of our pilgrimage? The Manakamana cable car short-circuits the distance between what Rebecca Solnit poetically describes as “mount obscurity and mount arrival.” Manakamana is a record of this circuitry, an index of faces seen in the act of seeing, thrust into the vacancy of a nature that scrolls by like some uncanny rear projection from an old Hollywood film. (In the modern world, our experience of nature may increasingly, and uncannily, come to feel like a simulation.)

Yet the awe elicited by the dramatic setting remains ineffable, beyond the collective and monotonous “Wow” of the assorted pilgrims. (Spoken language is scarcely the medium to best convey the insights yielded from the film’s circumscribed point of view.) Nor, in the relatively steadfast expressions of all who fret upon the cable line’s diminutive stage, whether advancing to or retreating from the ancient temple, swaying soporifically in the rarified air, is there evidence that the camera can distinguish between states of rapture and those of boredom. The cable ultimately outlives the celluloid as the film rolls out to black, foreclosing any definitive declaration about the nature of human behaviour, exalted, depraved, exotic, ancient, modern, or otherwise. Listen closely and you can hear, somewhere in the passing whisper of the cable line, the new season’s corn coming to harvest.