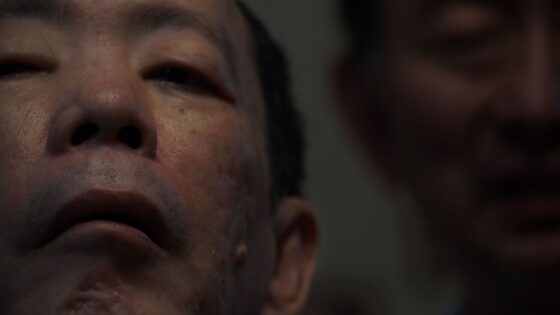 “The person we love we dream only of eating. That is, we slide down that razor’s edge of ambivalence.”—Hélène Cixous, Love of the wolf

To begin with a spoiler, Caniba concludes with a miracle—or at least this is how the film’s subject, the infamous Japanese cannibal Sagawa Issei, describes the sudden and unexpected wave of happiness that floods him as he is fed snacks and tucked in for a nap by a woman in a cosplay French maid’s outfit. As staged and performed for the cameras of Harvard Sensory Ethnography Lab stalwarts Lucien Castaing-Taylor and Véréna Paravel, this scene amounts to a distorted self-exculpation from a man who had been driven to commit murder by his urge to consume women’s flesh. Now disabled and more fearful of his own death than penitent for the death he caused, Sagawa is rewarded for his participation in this exposé with a few earthly delights that arouse his desires and his dormant Catholic faith alike, as if those waters were drawn from the same poisoned well.

Ostentatiously refusing to judge their subject for his crime, Castaing-Taylor and Paravel here grant Sagawa a platform from which to announce his absolution—a proclamation that is promptly followed by a cheeky karaoke coda of the Stranglers’ “La folie,” a song that romanticizes Sagawa as a tragic figure who was, simply put, madly in love. Many audiences and critics of this vile yet deeply compassionate documentary have been blindsided by its surface shocks (of which there are many), resulting in equal parts raptures and rebukes towards the filmmakers’ bravery or depravity, depending on the source. Were we to look past the impact of the film’s sensory and ethical affronts, however, we would see how furtively Castaing-Taylor and Paravel exploit our moral sensibilities, eroding the defense mechanisms of decency and propriety (especially as they relate to representation) that would otherwise keep us at a distance from their subject’s repugnance. The duo’s performative irreverence toward their project—which includes referring to it as a “comedy” and inviting audiences to not enjoy the film at its public screenings—is much more than pretense or showmanship: it forewarns their own uneasy relationship with their film’s negative capability. Caniba’s sharpest provocations derive from its makers’ ambivalence, their unwillingness to succumb to those ethical impulses that would lead them to vilify their subject—even if this means partially submitting to that subject’s control over this latest self-construction of his public image, which he has been astutely managing (and profiting from) ever since transnational legal technicalities led to him walking away free five years after he murdered and partially consumed the body of his Sorbonne classmate Renée Hartevelt in 1981.

For all its innate provocation, Caniba virtually revels in its absorbing dullness. Recorded by Castaing-Taylor and Paravel (with translator, producer, and sound recordist Nakazawa Nao) in an unspecified Tokyo suburb, the film is a far cry from the flourishes of their (art-)star-making Leviathan (2012). Here, the filmmakers opt for long, unbroken, tightly framed takes of faces and bodies that efface any details of their physical surroundings, the focus dropping in and out according to their natural impulses while shooting, or perhaps to their capitulation to the tedium of filming a subject whose language they did not understand. This hyperproximity to their subject recalls the pair’s recent sleep-study somniloquies, where recordings of the in-dreams ravings of American songwriter Dion McGregor play over images of nude bodies blurred to oblivion in extreme close-up.

Sagawa’s cold countenance and equivocation stand in stark contrast to the unrestrained disclosures of McGregor’s sleep talk, the former’s account of his life and crime delivered as a cryptic fusion of memory, fantasy, haiku, and confession. Sagawa has had decades of experience shaping his image in the media, whose insatiable mainstream outlets—which regularly reanimate his case to castigate him as a monster and spike the ratings—keep him enough in the public eye that he has been able to carve out a living in more niche outlets, including food criticism, soft-core porn, and an explicit manga autobiography. Partially as a result of its subject’s studiously maintained impenetrability, Caniba’s images are constructed almost exclusively around countenance and gesture, some of which are used to maximize our discomfiture. Castaing-Taylor and Paravel relish goading the audience with visual and aural reminders of Sagawa’s need to feed: the offscreen sound of his chewing, to a crumb stuck on his lip, and his greedy gobbling of the pain au chocolat fed to him by the aforementioned French maid. No words could so viscerally evoke the revolting nature of Sagawa’s crime as well as these images and sounds of him fulfilling this biological imperative, a quotidian ritual in which the physical actions of his atrocity are re-enacted at least three times a day.

When Sagawa does speak it’s to his brother Jun, who serves as his brother’s keeper and is present to oversee and moderate the proceedings with the filmmakers. Jun serves in Caniba as both a conduit and an audience surrogate, one who seeks the humanity within Issei’s monstrosity and chuckles uncomfortably when that monstrosity is laid bare. We share Jun’s disappointment when his brother evades his interrogation, such as when a pointed question about his victim’s death compels Issei to ask for a piece of chocolate. In one of the film’s toughest scenes, Jun insists on reading the Issei-authored manga recounting the night of his brother’s crime, which he, like us, is observing for the first time. He makes a valiant effort to flip through the pages, the camera lurching to catch a glimpse of the horrific drawings, but eventually slams the book shut, repudiating it as “a real piece of shit” while fretting about how its publication has ruined Issei’s reputation.

Jun explains that Renoir’s paintings, cuddly animals, and the animations of Disney and Miyazaki are the “common ground” that he and his brother share—a collective view of “beauty” that facilitates Jun’s vocation and that he tries to encourage in his brother. These heartwarming displays of fraternal affection return to mind when Jun is depicted desecrating his own flesh in an episode of autoerotic self-harm, stabbing at his bicep with knives and biting at the muscle before blurting out, through blood-stained lips, “My brother and I have this in common.”

These images are enough to produce the effects of Stendhal syndrome in even the most stoic viewer. The link that Jun draws between his own partialist masochism and Issei’s crime is teasingly reinforced by the film’s structure: Issei’s graphic, self-authored manga and Jun’s graphic, self-authored performance are presented in sequence, separated by a brief intermezzo of 8mm home movies depicting the brothers in their early childhood that emphasizes their closeness and likeness (“We really grew up like twins,” Jun remarks). The conflation and graphic depiction of the brothers’ markedly different pathologies, and the suggestions of equivalency between Issei’s crime and Jun’s (self-)punishment, constitute Caniba’s most troubling proposition: many would read this as an offensive likening of fetish culture to an act of unspeakable depravity.

Instead of deflecting these connections that Jun makes between his and his brother’s respective desires, Castaing-Taylor and Paravel structure these sequences so as to invite reflection upon the foundations of the pathologies at play, and the diverse means through which those pathologies have eventually manifested themselves. The archival footage of the brothers collapses temporal distinctions, tricking us into attempting to locate the source of their desires in the grainy black-and-white images—note, for example, a scene of the toddlers being inoculated, wherein Jun sobs in anticipation of the needle about to penetrate his flesh while his mother gently holds his arm at the exact spot that would soon become the site of his erogenous fixation. While this type of psychoanalytic conjecture is a welcome diversion from the otherwise distressing experience of watching the film, any conclusions derived from it are ultimately meaningless (as the filmmakers themselves have declared). One cannot uncover the origins of human impulses in an image, or even a sequence of images—and if nothing else, Caniba teaches us to be suspicious of images, and their endless potential to be mined for (fabricated) meaning.

No less of a misdirection is the film’s insistent underlining of Issei’s struggle with his Catholicism and the subtle hints of its connection to his cannibalistic desires. Of course, the Catholic faith itself is based on an act of symbolic cannibalism, the Eucharistic consumption of body and blood constituting an act of remembrance and love—a connection that the filmmakers ensure will not be lost on the audience via the inclusion of an epigraph from the Gospel of John, describing the miracle of Christ’s transubstantiation at the Last Supper. We learn from Issei that his mother was a Catholic, which he could never be because, as he tells us, “I’m too dirt. Dirty.” In a carefully selected excerpt from one of his porn performances, a woman rides Issei while flanked by two crucifixes affixed to the wall; moments later, he exclaims, “Thank God!” as he reaches climax, his gratitude/gratification echoed in the film’s final moments with the “happiness” he expresses, and his praise of God in response to it.

One may charitably read the purpose of the filmmakers’ pointed invocations of such simultaneously heavy yet empty symbolism as an attempt to help us rid ourselves of the various preconceived notions that have been constructed around Issei and his transgression. The film’s title, after all, refers to an etymological misunderstanding (by Christopher Columbus, no less) from which the term “cannibal” was originally derived—a sly suggestion that the archetype of the cannibal is one founded on error and misrepresentation within historical, anthropological, and popular contexts alike. Even more tellingly, the title of an earlier iteration of the filmmakers’ Sagawa project, installed in an old tofu factory at documenta 14—Commensal—is a literal call to action: an invitation to share a table with one’s hosts. Perhaps this is all that Caniba aspires to: a celebration of communion, a sharing of ideas absent judgment or reproach, fuelled by the bonds of family, friendship, and benevolence.

As guests at Issei’s table, Castaing-Taylor and Paravel empower him to tell his tale in his own mystifying words—and, in locating some deranged aspect of love and humanity therein, the filmmakers do indeed slip down what Cixous referred to as “that razor’s edge of ambivalence.” Its sharpest point is no doubt that at which we recognize the tragic absence of Renée Hartevelt from this portrait, the scarcity of her name and image in the film a constant reminder of her actual, physical disappearance. But even more terrifying than the victim’s absence is the film’s subtle suggestions of the everlasting nature of Issei’s crime. After thanking God for his happiness, Issei lies staring up at the camera as a rumble of thunder overtakes the soundtrack. Caniba forces us to confront the potential violence of human desire as a natural expression, as common and constant as the roar of a coming storm. It’s thus all the more ironic that a film this certifiably and studiedly verboten, its suggestiveness so inextricably bound up with its disingenuousness, is destined for eventual obscurity. And it’s a pity as well, given that Caniba invites us to contemplate not only our revulsion at its subject, but also our repulsion from itself.

Posted in CS73, Features, From The Magazine