The Exorcist: Barbara Loden and Wanda 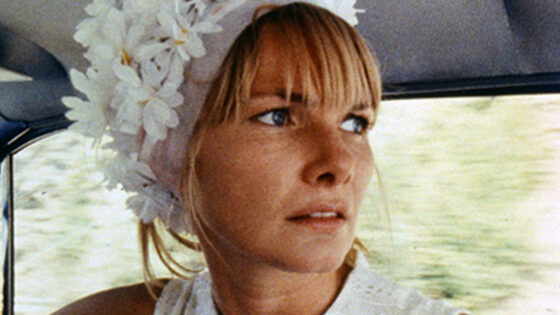 Barbara Loden re-emerges in fragments. Caught in a 1965 snapshot from street photographer Garry Winogrand, she cuts across a wedge of city sunlight; tufts of windblown hair halo her wary face as one high heel steps just out of frame. Elusive, she fascinates—a female flâneur frozen in the shimmering afterlife of a gelatin silver print. “I spent every day just walking and walking,” Loden said of her early New York years, “and I didn’t really know what I was going to do.” Decades later, in 2002, when the picture is mass-produced as a 37-cent photogravure stamp commemorating Winogrand, not Loden, she is already dead. “The image is ghostlike,” wrote Susan Loden in a press release identifying her sister, who, as the actor-writer-director of Wanda (1970)—the independently produced classic newly released on Blu-ray by Criterion—had embodied a resonant portrait of a woman adrift before succumbing to cancer in 1980 at the age of 48. “I am astounded and proud, but not surprised, that she has made her way back into view.”

That phrasing—“she has made her way back into view”—is attractive to me, as if something marrow-deep in Barbara Loden and her work resists neglect or effacement. So often in contemporary criticism, Loden is taken up with full-throated fretting over how close her legacy came to evanescence. Anecdotes from her biography seem in on the “joke.” Over a decade before directing Wanda, Loden had pranced around as a sprightly, kittenish comedienne on The Ernie Kovacs Show. In one 1956 episode, she dangles her towhead from one side of a wooden box and “her” legs from another, while a moustachioed and bug-eyed Kovacs, in character as tosspot magician Matzoh Hepplewhite, asks, “Have you ever been sawed in half?” Loden pauses, as if the question, made redundant by her intact body, is complicated by memories of dismemberment or erasure. We could almost imagine her wondering: Which time?

Of course, the jape is not that she’s scarred but rather that she’s a bubblehead who doesn’t know her tit from her toe, and when Kovacs prods her, she quips, “Aw, gimme a minute, will ya?” in a wisecracking screwball whine. (Of these hackneyed little-girl roles, Loden would tell The New York Times: “I got into the whole thing of being a dumb blonde. I didn’t think anything of myself.”) Some years later, future husband, then-current inamorato, and stool-pigeon American filmmaker Elia Kazan would cast her in Splendor in the Grass (1964) as a profligate flapper with the on-the-nose name of Ginny, who sighs to an ogling man in earshot: “Fill me up, please, I’m empty.” Then, in Arthur Miller’s 1964 play After the Fall, Loden ventriloquized a thinly fictionalized Marilyn Monroe, called Maggie, who prattles on about how the bigwig lawyer (and Miller stand-in) Quentin can look her up when she’s away on singing gigs: “I would register in the hotel as Miss None…I made it up once ’cause I can never remember a fake name, so I just have to think of nothing and that’s me!” Pleading, fragile, and bewigged, Loden blurred with Norma Jean in the public imagination. Of the role, which nabbed her a Tony Award, Loden said to celebrity disher Dick Kleiner: “I sure know how that feels.” Kleiner’s headline? “Is There Also a Barbara Loden?”

Barbara Loden was born in 1932 in Marion, North Carolina, a scrap of a town about 20 miles from my own, Morganton, of which historical novelist John Ehle wrote that “from the main street one could see far off in the west a blue wall rising from the hilly country, a chain of mountains”—true of Marion, too, where, as you cruise down Main Street, those sloping forms emerge at the lip of a hill. Sloganeered with “Where the Main Street Meets the Mountains,” Marion was described by Main Street novelist Sinclair Lewis in a newspaper column on a 1929 textile-mill strike there (three years before Loden was born); when the town policemen’s tear gas cleared, three were dead and dozens wounded. Lewis wrote, “They are hungry, they are tired. They are sick of being shot down.” Folk singer Woody Guthrie cut to the chase with “The Marion Massacre”: “These men were only asking/their rights and nothing more.”

In fact, they were asking for less. “I came from a rural region, where people have a hard time,” Loden explained in a newspaper profile. “They’re not stupid. They’re ignorant. Everything is ugly around them—the architecture, the town, the clothing they wear. Everything they see is ugly.” In one of the kinds of small miracles that spur revival narratives, UCLA restorer Ross Lipman chanced across the original 16mm footage of Wanda in a building set for demolition. Unfaded from repeated projection or transportation, the reels revealed how saturated, almost Polaroid-hued, the film was intended to be—not dishwater realism, but a desire to depict rural people with tender frankness. Of her decision to hire cinematographer Nicholas Proferes on the strength of documentary films shot with D.A. Pennebaker and the Maysles, Loden said, “Sometimes you see a film, and they make people look ugly, and then [with] another cameraman…they’re human beings, and you don’t have the feeling that they’re ugly. I guess it’s just the soul of the cameraman.”

In interviews, Loden’s voice is filigreed with mountain cadences she could not flatten; in 1964, she groused that she “always [said] ‘tin cints’ or ‘inythin’,” and she pronounced the word “literature” in a way that I’ve only ever heard from my mawmaw Bertha, born in North Carolina in 1934, that drops the chh-sound: “lit-err-uhh-tyoor.” Of her Southern birthplace, critics who glamourize her “obscurity” often cite her reply to French critic Michael Ciment: “If I had stayed there, I would have gotten a job at Woolworth’s, I would’ve gotten married at 17 and had some children, and would have got drunk every Friday and Saturday night. Fortunately, I escaped.” Her verdict is hard to dispute. Carson McCullers, like Loden, fled at age 17 from the South to New York City; her debut novel, The Heart Is a Lonely Hunter, written in North Carolina and published when Loden was eight, closes with piano prodigy Mick Kelly’s dreams evaporating in the sticky Southern heat:

But now no music was in her mind. That was a funny thing. It was like she was shut out from the inside room. Sometimes a quick little tune would come and go—but she never went into the inside room with music like she used to do. It was like she was too tense. Or maybe because it was like the store took all her energy and time. Woolworth’s wasn’t the same as school. When she used to come home from school she felt good and was ready to start working on the music. But now she was always tired.

Through filmmaking, Barbara Loden wanted to “justify her own existence,” in the words of Proferes. Filmed in ten weeks, with a four-person crew, on a shoestring budget of $115,000 forked over by Harry Shuster, a dilettante producer who Loden had met while on safari with Kazan, the movie she made is a miraculous testament to ingenuity and spontaneous creation. It is also an exorcism: “I had a compulsion,” Loden said, “to get the story of Wanda out of myself.” When Wanda opens, we do not feel the absence of the writer-director-star at first because we do not expect her, like an unlooked-for straggler to a party. Instead, the camera drifts slowly toward its subject. Trucks trundle through anthracite heaps jutting into the pallid sky. Inside a clapboard house, a wizened woman clasps a rosary, a babe toddles underfoot, an infant wails without consolation, a rumpled figure heaves herself up from bed. A man slams the door. Only then does the camera pivot down to a quilt-draped sofa where Loden is shrouded in a white sheet, her bare brown legs akimbo. She uncovers her face and strawlike nest of hair; she is Wanda, who murmurs, “He’s mad ’cause I’m here”—though she is barely there, or anywhere, though she was so nearly overlooked.

Wanda follows its namesake’s picaresque wanderings after granting her husband (Jerome Thier) a quickie divorce and custody of their children, the first step on what becomes a winding path of least resistance. Rootless, without cash, too enervated to secure work in the local sewing factory, she floats into a push-me-pull-you union with “Mr. Dennis” (Michael Higgins), a petty criminal who is more hapless than charismatic. Twenty-five years later, Kelly Reichardt would rework Wanda’s housewife-on-the-lam narrative with her similarly quasi-autobiographical River of Grass (1994), which also honoured the lyricism of Terrence Malick’s Days of Heaven (1973). (“I was asked to be part of a Hal Ashby documentary with the premise that Ashby is overlooked,” Reichardt said once. “I love Shampoo [1975], but my first response was ‘Hal Ashby, overlooked: really? Barbara Loden is overlooked.’”) While Loden’s 16mm images have their own spare, functional beauty, they resist lyricism as surely as they do pity or condescension. Listen to Wanda on headphones, sans image, to experience its grim quietude, with the staticky hiss of the soundtrack dominating all. These are not people who “have time for wittily observing the things around them,” said Loden. “They’re not concerned about anything more than existing from day to day.”

Released in 1970 to mostly admiring press and the International Critics’ Prize at the Venice Film Festival, Wanda was miscast by feminists in their own image. Spurred by second-wave discourse desperate for depictions of “empowerment,” female culture writers could not fix on any reading of the title character other than one of her resistance to and defiance of the roles ascribed to a wife and mother. But their concerns were largely middle-class. Compare Wanda with Lucrecia Martel’s more recent The Headless Woman (2009), where the blank passivity, whether madness or artifice, adopted by a woman after she potentially kills a passerby with her car is buoyed by the intractable bourgeois institutions around her. Even if she drops out of her life, she will be protected; Wanda has no such support. Estelle Changas, in Film Quarterly, is the only contemporary American critic I have read who admired Wanda without miscasting its central character as an active refusenik of society or, in Pauline Kael’s piqued words, an “ignorant slut.” Marguerite Duras understood: “We have never had any other recourse but muteness. Even so-called liberated women, by their own declaration.”

Wanda, said Loden, made her “a different person. I developed more courage in my convictions.” Tucked into the Criterion release, the German documentary I Am Wanda records a more daring Loden in the last months of her life, as she was dying of cancer. Contrary to her jittery, timid ’70s interviews, here she seems canny and capable, an elder artist in a diaphanous sailor’s top with Breton stripes, gold bracelets clinking on her wrists. Here is the woman who taught fawning students at the Actors Studio and directed idiosyncratic Off-Broadway plays; who spent a decade vigorously writing scripts for never-to-be-completed projects like Love Means Always Having to Say You’re Sorry and a febrile adaptation of Kate Chopin’s The Awakening; who collaborated with fellow female filmmaker Joan Macklin Silver on The Frontier Experience (1975) (one of two shorts she made for educational programs, along with The Boy Who Liked Deer [1975]); who said of directing a feature film, “I think I could do it better next time.” Loden never had a chance, but the enduring fullness of Wanda is a testament to her refusal to be forgotten.