Pretending That Life Has No Meaning: Paul Schrader’s The Canyons

Phil Coldiron/CS55, Features, From The Magazine 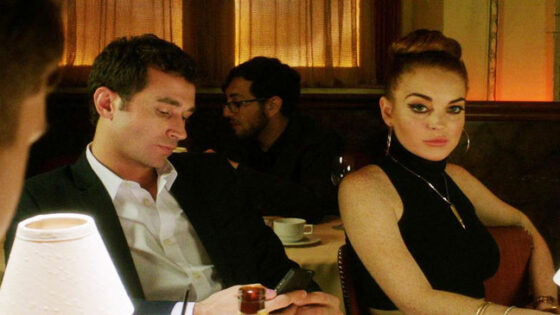 It starts with a look. And then another, and another, and before you know it 90 minutes have gone by in a rush of looks, because that’s all anyone does in Los Angeles—they look. The fact of it is that most of this looking is at the back of someone else’s car in traffic, but you can’t make much of a movie out of that, so director Paul Schrader and writer Bret Easton Ellis have opted for the second most common option: looking at objects of desire. Here, as in life, these objects are frequently human, because everyone really is as beautiful as you might imagine if you’ve only heard stories. They’re beautiful in the same vacant way the windows of the shops on Rodeo Drive are, a detached beauty at the bottom of this sort of glossy haze of a life that Schrader and Ellis get exactly right in The Canyons. This is a movie that itself isn’t nearly beautiful enough to make it in Los Angeles, or even in Austin, where a loose-lipped SXSW staffer followed up its rejection from the festival by deriding the film as having “an ugliness and a deadness to it,” a charge that’s both as correct and as vapid as saying the same of, e.g., the recent work of Cindy Sherman.

All this looking sticks like a scab over the void where the living of these lives should be. The Canyons is a film without psychology, or even interiority, one where an individual is defined exclusively by whom they’ve fucked and whom they’re fucking. Given the centrality of sex to its social structure, it’s only natural that everyone in The Canyons’ constellation is connected coitally (the only character of any note to exist outside of this web is, naturally, a therapist). Hollywood here is a system of horizontal links that highlight its vertical sectioning along class lines even as they offer steps up the ladder. Though the film circles a love triangle acted by a fallen star (Lindsay Lohan), a porn star (James Deen), and a nobody (Nolan Funk)—the three groups in Hollywood with the fewest onscreen inhibitions, whether by choice or necessity—it’s a relatively chaste affair, one where the act of fucking is of far less worth than the complex currency of sexual relationships traded like derivatives through all these glances, a number of which are aimed squarely at the audience and seem more like cries for help than come-ons.

This is particularly true for Lohan, whose Tara spends most of the movie in various states of repose: sitting in conversation, laying by the pool of a gaudy Malibu home, splaying herself out on a couch so Deen can go down on her while another man jerks off. She’s the only person here with the talent to aim at really acting, though to the movie’s benefit she appears largely to have forgotten how, instead cycling through a series of expressions-as-moods. There’s the icy death mask, all severe lines, and the poor little rich girl, as bored as she probably was during the filming of a given scene, and the sultry sex bomb, which has a shabby secondhand feel. Behind all these there’s the woman in trouble, tipped by a feral glint in her eyes that betrays how little distance there is between Tara’s desperation and Lohan’s own, as both women try to keep up the illusion that they’re in control of their life.

On one side of Tara is Christian (Deen), a rich-kid executive producer type, the kind of guy who thinks he’s smart because he refers to online hook-ups as “assignations.” Deen, who’s made more than 1,400 adult films, acts like he’s in a porno, a strange quality that gives every shot he appears in the feeling that sex might spontaneously occur at any second. This is doubly strange given that Deen’s gait is duck-footed to such an extent that he occasionally resembles a very young Charlie Chaplin, with all of the comic mugging replaced by an equally rambunctious sexual appetite. With the exception of one unfortunate scene in which he’s called on to do something more than radiate a vaguely threatening sexuality, Deen’s as effective at playing with the grain as Sasha Grey was playing against her usual on-screen persona in The Girlfriend Experience (2009).

On the other is Ryan (Nolan Funk), an aspiring actor played with the tragic conviction of the thousands of aspiring actors who fail in Hollywood every year. His presence between Lohan and Deen is a study in what it means to be a star. Though Lohan has almost entirely lost the quality that made her seem bound for the height of Hollywood royalty in the wake of Mean Girls (2004), she nonetheless is still marked by a trace of what it is to be a movie star, an ability to fully live in an audience’s imagination as something apart from herself, even if only for fleeting moments. Deen has nothing of the make-up of a traditional movie star—even the boyish charm of his fine features is set just far enough off-kilter that there’s no worry of him tumbling into a second career playing opposite the Jennifer Lawrences of the world—but his ability to project sexual hunger in any situation can set one’s imagination to work in its own star-like way. Funk in comparison is simply blank. The Canyons opens and closes with him staring directly into the camera, and he’s its purest example of this Los Angeles-bred brand of vacant beauty: attractive enough to sleep with Tara and threaten Christian, but lacking the quality that would ever let him be their equal. If the film holds a real truth about Hollywood, it’s this expression of an empty, alienated middle ground between the spark of stardom and the messy appeal of an everyday life, a place where a perpetual striving to connect, to move people, to be something bigger than one’s self leads only to falseness and isolation.

Schrader surrounds this core truth with a Los Angeles built on a pure artifice, with only the thinnest connection to the texture or tone of the material of the city (see Sofia Coppola’s The Bling Ring if you would like to know what the air in Los Angeles looks like). Even more than in American Gigolo (1980), everything is a wash of neon shades—yellow, orange, green—that render every space fetid and mossy and alive, the city figured as an organism feeding on its inhabitants (only the antiseptic white of Christian’s Malibu mansion and a brief lunch at a café on Sunset between Tara and Ryan’s girlfriend, Gina [Amanda Brooks], are free from this soupy, encroaching light). It isn’t expressionist—this would require either a psychological dimension or clearly legible actions, neither of which the film shows any interest in—but more like an attempt at finding a visual means for expressing the city’s fundamental lack of logic and order.

In concert with his lighting, Schrader sends his camera off to do as it pleases in the most illogical ways. The opening scene, a four-way conversation at a restaurant table, is abruptly broken up when the camera leaves the characters for an overhead tracking shot down the same restaurant’s bar (though we only know it’s the same restaurant because of the continuity of its abrasively orange light). A slow-burn confrontation between Tara and Christian is set up by a complex shot that follows the latter down a driveway, watches through windows as he walks through his home, and then meets up with him again as he stops to look down from a patio at Tara lounging by the pool below; there is nothing communicated by this shot that couldn’t have been achieved with far less in the way of dolly track and prep time. Crane shots abound at the most unexpected moments, like a man entering a production office. Even a simple scene like the lunch at the café on Sunset, staged almost entirely in traditional shot/reverse shot, suddenly breaks down when the stationary camera briefly becomes noticeably handheld halfway through, subtly creeping up and down the back of the women’s necks as they speak. It has the go-for-broke, or, maybe more accurately, too much coke, energy that seems to emerge when established filmmakers are given the chance to run wild away from a career in the studio system (Fuller’s Dead Pigeon on Beethoven Street [1974] is the pinnacle of this mode).

Just as the characters exist in a world of looks rather than actions, Schrader deploys the energy of his own camera-look to fill in the lack of action on the part of his characters—Tara and Christian have sex a few times, Ryan does some modelling, and there’s a murder; that’s the extent of what happens beyond talking and looking. In this world where effects are paramount, all the causes recede into a background drift on which this flat surface life floats. It’s all horribly fatalist: the stars succeed because they’re stars (they even get away with murder), a fact which makes as little common sense as any of Schrader’s aesthetic strategies to those who can’t see that they’re not stars and forge ahead with desperate, idiot energy, unable to gain any purchase on the amorphous set of relationships that undergird Hollywood life.

Given this lack of progression, The Canyons joins Spring Breakers (2012) and The Bling Ring as the weakest entry in a trio of circular reports from America that start and end more or less where they begin, drawing characters through situations shaped by the realities of class and consumerism and fame culture (The Bling Ring even posits Lohan circa 2008 as a hero to its teenage burglars) that shape this country today. That none of them offer a way out speaks less to the sensibilities of their directors—it would be hard to find three directors working in the American cinema today with approaches as different as Schrader, Korine, and Sofia Coppola—than it does to a certain feeling in this era where Change turned out to mean drone strikes instead of ground troops, PRISM on top of the Patriot Act, and not nearly enough of the socialism we were promised was coming by those on the right. In a 2005 interview with Rouge, Schrader spoke of a desire to follow his previous examinations of anger, narcissism, and anxiety with a film about superficiality, “pretending that life has no meaning.” Here he’s made a film that is entirely and essentially superficial, populated by the least expressive actors surrounding two not-quite-stars. What makes The Canyons more radical yet less intelligent than Spring Breakers or The Bling Ring, which both find formally inventive escape routes out of this indefinite American nightmare, is its commitment to a system that can only convey no meaning—there is no pretending it is absent, it simply doesn’t exist. It’s a movie that’s finally as blank as the stare on Nolan Funk’s face in its closing shot: a 90-minute void built of desperation and manic energy with nowhere good to go.

Posted in CS55, Features, From The Magazine