Man from the Southwest: The Brutish Cinema of José Campusano 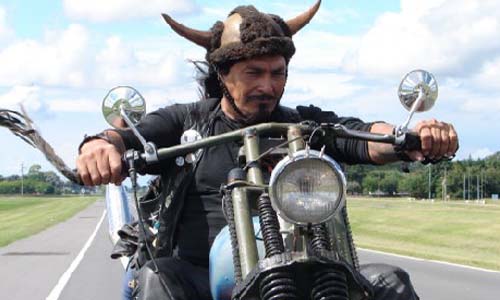 3D, a charming little comedy/documentary by Rosendo Rui, recently had its international premiere in Rotterdam, and the film itself transpires at another film festival: the 2013 edition of the Festival Internacional de Cine Independiente de Cosquín (FICIC), held at the Cosquín resort in the Argentine province of Córdoba. Loosely centred around a love story between a would-be filmmaker and a would-be actress, the wisp of a plot provides a perfect excuse to show the backstage workings of off-off-indie filmmaking in Argentina—filmmakers who are not only outside of mainstream or commercial production, but are not well-known abroad, and whose films aren’t usually shown in major festivals. Gustavo Fontán, a prolific experimental filmmaker, would be one example, or Nicolás Prividera, a radical left-wing filmmaker and critic who has theorized against “international style”—i.e., the kind of films that festivals look for and which standard indie directors tend to make in order to play internationally—and whom, in his appearance in 3D, defines contemporary Argentine filmmaking as divided between a reactionary modernism and pobrismo, the exploitation and exhibition of the poor.

José Celestino Campusano is the star among 3D’s gentle fauna of cinema outsiders; he won the top prize at the 2013 FICIC for Fango (2012), his third feature and his true masterpiece, a film that’s neither modernist nor pobrist. Eccentric and charismatic but also very kind, Campusano is hard to categorize, and his films even more so. “Your performance is fine, but you’re taking pleasure from the violence of the scene. And we don’t do that. We don’t indulge in violence,” says Campusano to actress Micaela Ritacco in 3D, interrupting her screen test for an upcoming feature that Campusano plans to release in 2014. (That as-yet-unnamed film is the second of four that Campusano plans to make this year; the third, El perro Molina, is almost complete apart from a boar-hunting scene.) It seems like a strange remark from a director whose films contain a remarkable number of shootings, stabbings, rapes, and beatings, not to mention insults, and who is himself a rather imposing figure what with his black duds, long hair, and rather fierce expression. (In 3D, Campusano recounts an anecdote about when he and his recurring star Rubén Beltrán entered a video store in Córdoba, and an old woman immediately raised her hands and said, “Take my purse, but don’t hurt me.” “Lady, I thought you were robbing the shop,” Campusano replied.) But Campusano has an answer for almost everything: “You know what is the maximum amount of violent moments in any of my films?” he asks Micaela. “Only three minutes. I’ve measured them.”

Born in 1964 in Quilmes, 30 kilometres south of Buenos Aires, Campusano studied film in Avellaneda (three train stops from Quilmes) briefly in the ’80s, made some shorts for his school, then disappeared from the public scene. He made a living selling windows until he returned in 2005 with the 40-minute Bosques, which he co-directed with Franco Quattrini and which played in Mar del Plata and BAFICI, the two main festivals in Argentina. Seen today, it looks like an unfinished feature with a rather fuzzy plot, but its unusual locations and characters set the template for the films to come. In terms of geography, Campusano’s films take place outside Buenos Aires, in locations—Bosques, Ezpeleta, Berazategui, Monte Grande, Tristán Suárez, Marcos Paz, Luis Guillón—that mix urban and rural. Streets, houses, cars and buses mix with horses, forests, and uncultivated fields; the inhabitants are poor, but there are middle-class neighbourhoods nearby, and even some decaying old buildings that recall a social structure that is no longer extant. (Until his most recent feature, 2013’s Fantasmas de la ruta, Campusano’s didn’t even acknowledge the presence of schools in the area, nor police, nor civil institutions of any kind.) His filmic world is generally a no man’s land where civil society has simply been abandoned due to consecutive and severe economic crises, and whose inhabitants have replaced traditional social rules and mores with a code of conduct that is more attuned to the realities of their lawless environment. There’s something of the Wild West here, or a post-apocalyptic war zone akin to a neorealist Mad Max (1979), a film that Campusano digs more than American westerns.

Campusanoland is inhabited by people who come from several different places and periods: European immigrants, descendants of the Indians who arrived in the last half-century from the north of the country, or even the last remnants of the 19th-century gauchos. Bong Joon-ho, one of the jurors at Mar del Plata last year when Fantasmas de la ruta screened there, was puzzled by a recurring motif in the film: Why, he asked, do these people spend so much time saying hello to each other? The answer is that, in this environment where violence can erupt at any time, it’s never unwise to exaggerate formal salutations and establish contact in a non-threatening manner. As with westerns or gangster movies, Campusano’s films are about trust and treason, about the reversibility of human bonds. But there is something unique in his approach to this theme: the idea that these abandoned and wasted people who try to survive in their particular jungle are closer to freedom and happiness than those who live by established rules, that this forbidding wasteland may contain the seeds of an anarchist utopia. 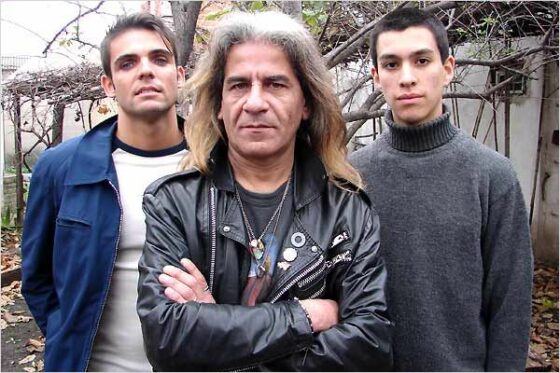 Following Bosques, Campusano made another medium-length film, Verano del ángel, which he shot in 2006 and which has never been screened in public; like its predecessor, it feels like an unfinished project. It’s a film about sex and domination: Marisa, a teenager who lives with her father, brings home three juvenile delinquents. Their leader is the amoral Cloro, who recalls the villainous Jaibo from Buñuel’s Los olvidados (1950). Cloro betrays his friends and uses Marisa in every possible way, even giving her to a gang of drug dealers to pay off a debt; but Marisa, out of hatred for her father, submits herself to this degradation just to prove that she is strong enough to endure it. Sexual exploitation and domination of women are constants in Campusano’s films—e.g., the scene in Vikingo (2009) where a gang of bikers hire a prostitute to fellate them all—but as with Marisa, his women are never passive: there is strength in their weakness, just as there is weakness in the brute strength of their oppressors. There’s more proof of that in Vil romance (2008), a film about a gay couple, the “male” half of which, Raúl (Oscar Génova), is a psychotic dealer in firearms who brutally dominates his young partner Roberto. But Roberto is supported by his fiercely protective mother and sister, who are first seen sharing two men in an orgy, and who finally murder Raúl to liberate Roberto from his tyranny. Moving rapidly from explicit group sex to violent crime to family intrigue, Vil romance is like a high-velocity soap opera, spiced throughout with some memorably creative vulgarity: “You should surrender that old fetid ass of yours,” Raúl orders Roberto at one point, a line that has gained something of a cult following. (Campusano’s production company, it should be noted, is called Cinebruto—“brute cinema.” For good reason.)

In 3D, Campusano is confronted in a theatre lobby by a spectator who tells him “I hated your movie. The actors are very bad!” According to Campusano, that’s a frequent criticism levelled at his movies. All of his actors are non-professionals, cast for their physical presence and their enthusiasm for the project, and Campusano has them utter their lines in a plodding, mechanical rhythm, as if they were reading a script in rehearsal. That grating deliberateness, however, is countered by the native spontaneity of their bodies, bodies that truly belong to a Bosques, an Ezpeleta, a Luis Guillón, bodies made by life and not invented for the screen. In this sense, the performance method in Campusano’s films is not too far from that in the work of the Straubs or Pedro Costa; and while I don’t think that Campusano was directly inspired by them, he has still given significant thought to how it shapes his cinema. “The acting may seem bad,” he says, “but I want the bodies of the actors to tell the truth, not the technique to tell a lie.”

With Vikingo in 2009, Campusano found his star and hero. Rubén Beltrán’s Vikingo is a veteran biker, a huge guy who is also a child, a child that wants to have fun on the road with his buddies, chase women, and dance rockabilly. But because of the peculiar nature of Campusanoland, Vikingo is also a wise man, a role model, a kind of John Wayne character who is neither sanctimonious nor free of sins, but who represents a natural equilibrium that is this world’s closest approximation of virtue. Vikingo is the living embodiment of this world’s unwritten code, the moral median against which the other characters’ respective deviations from that code are measured. In a land with no law, he represents the possibility of keeping the peace by not going beyond what is fair. 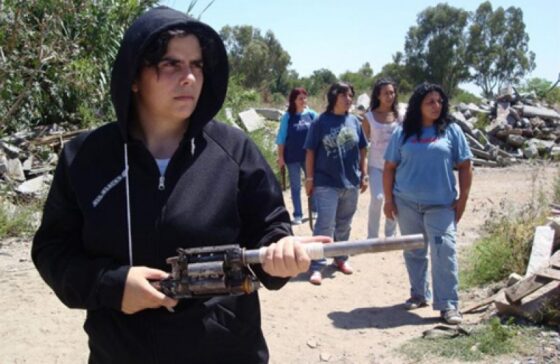 Vikingo also plays a big part in Fantasmas de la ruta, Campusano’s latest and most expensive film (his work is now getting state funding), the first where we see police and organized crime and the first to have scenes shot outside the domains of Campusanoland. (The film began as a five-chapter miniseries, and was edited down to three-and-a-half hours for the cinema.) As with Vikingo, Fantasmas de la ruta is built around a chain of favours being asked and favours being repaid (or not repaid), where the good guys can be separated from the bad guys by the fact that the former don’t ask favours to be returned, while the others use favours to build a trap for the beneficiary. Once again, Vikingo functions as this world’s model of fairness: early on, a mechanic helps steal a car that Vikingo uses for his work as a greengrocer; to get even, Vikingo kicks the guy out of his house and puts it up for sale, his asking price not one penny more than the value of the car that was stolen from him. This, however, is only a side story to the main thrust of the narrative, which is centred upon a young girl who is kidnapped to be sold into prostitution; one of Vikingo’s buddies turns into a thug in order to rescue her, and in the process sells his soul to violence. As ever, though, Vikingo keeps the faith, never moving an inch from his code even as it takes him to jail.

In Fango—which is, as I said above, Campusano’s best film, and which has so far not been seen abroad except at the Spanish online festival Márgenes, where it won the top prize—the moral cornerstone is El Brujo (played by Oscar Génova from Vil romance), a veteran musician who wants to put a band together to perform in a local pub. (The band’s name, like the film’s, is Fango, which means “mud.”) When a guy cheats on his wife with El Brujo’s woman, the spurned wife enlists the aid of her relative Nadia (Nadia Beltrán), a young, violent tomboy who has spent time in prison, to get revenge. As the fantastically crazy plot unravels, the usual chain of favours being asked and repaid occasions a series of absurd but contextually logical events involving a female rape, a duel with gaucho knives, a gang of lesbian ex-cons, and killings with homemade shotguns, all while El Brujo recruits his musicians as if he were in a Mickey Rooney movie. After friends of both are killed, Nadia and El Brujo square off for a final showdown that has shades of The Quiet Man (1952). Fango is so tragic and so funny that, like the music of El Brujo’s band—a tango-rockabilly or heavy-metal tango fusion that El Brujo calls “tango-trash”—it may provide the foundation for a new genre. Enjoy Campusano’s films, if you can find them.