Thom Andersen/CS54, Features, From The Magazine 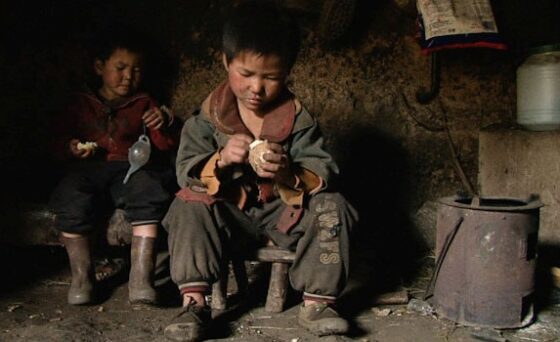 “Films have no interest unless one finds something that burns somewhere within the shot.”—Jean-Marie Straub, Cahiers du Cinéma, October 1984, p. 34

Wang Bing’s Three Sisters (2012) tells a simple story. Three sisters, aged four, six, and ten, live like orphans in Yunnan province, in the village of Xiyangtang (elevation: 3,500 feet; population: 80 families). Their mother has abandoned the family. The father, Sun Shunbao, has gone to the city to work. So they fend for themselves, cadging meals from their aunt, who tolerates them so long as they work. The father returns, but only briefly, bringing new shoes but taking the two younger sisters to live with him in the city and leaving the eldest, Yingying, to stay with her grandfather, Sun Xinliang. He tends his sheep, and she is left alone, and lonely. She even turns a sheet of cellophane into a toy. She asks a friend, “Can I come to your house to play?” He responds, “Why?” The grandfather takes her to an autumn feast in a nearby village. Afterward there is a town meeting. The mayor tells the assembled villagers that the government is intent on collecting the health insurance fees they can’t afford to pay. The people also complain about the government’s “rural revival” program: “They’re building these fancy new houses, and meanwhile the villagers can hardly afford to eat.”

Some months later, the father returns again, this time to stay. He was unable to support his family in the city. The family is reunited, except for the mother. In her place, Sun brings a “babysitter” and her daughter Yanyan. The final words belong to Zhenzhen, the six year-old sister: “Kids who have a mommy are the happiest in the world.” Then the final shot: a long tracking shot, without words, follows the babysitter and her daughter as they walk through the snow-pocketed mountains. There is no title at the end to relate the subsequent fortunes of the family.

This is direct cinema, and so there are some gaps in the narrative. The “city” is unnamed, and the father’s struggles there unspecified. The story begins sometime in 2010 and ends sometime in the winter of 2011, but its precise duration is uncertain. The fields are green at the beginning. Is it spring, perhaps? Or summer? How long is Yingying left alone between the father’s two visits? What is the reason for her persistent coughing? What happened to her studies at the village elementary school we see her attend with great enthusiasm for at least one day in November 2010? Did her work in the fields take precedence?

A simple story, but as Straub demands, there is fire in every shot. In many shots, this is true in the most literal sense. All the huts have open fires at the centre for cooking, for heat, and for light. Wang keeps these fires at the bottom margin of the frame just as he places the open doorways that blast a white light into the shots of dark interiors and the unshaded light bulbs that emit an intense yellow light at the top edge or side of the frame. These literal and metaphorical fires must not dominate the frame; otherwise their intensity would be diminished.

But fire also burns in the face of Yingying, the dutiful, stoic eldest daughter who yearns to read and write and study, to discover something unattainable in this tiny, remote village. There is fire even in her dirty, white-hooded jacket with the words “Lovely Diary” on the back, a jacket she never takes off throughout the film. She never demands anything, and she barely speaks, yet she is one of the most compelling, most affecting figures in all of documentary cinema.

It burns in the division between land and sky, which is particularly stark here. The horizons are always placed high in the frame. The earth has been graded into simple terraces, turning it into an almost abstract landscape. Wang further emphasizes these horizontal divisions by making startling cuts between extremely dark interior shots and extremely bright landscape shots, or between day and night. Even the grey skies have a penumbra of blue and violet along the horizon, separating them from the fields below. A hard life, but a big sky.

Straub’s admonition was inspired not only by Cezanne, who famously said of Mt. Sainte-Victoire, “Look at this mountain, once it was fire,” but also by Giotto, the Giotto of the Scrovegni Chapel frescos, which Straub discovered by chance when he was 18. There it is the blue that burns, that penetrates. Wang’s colours are closer to Giotto than to Cezanne: the blues of the sky and the smoke, the golds and reds of the fires in the huts that are like the halos and the crimson robes in the frescos. Like Giotto, Wang finds a clear, almost transparent skin colour, and he sets off the faces of the sisters against the darkness that envelops their hut outside the vicinity of the central fire.

But they are not “Straubian” shots. Wang’s camera is always handheld. (It should be noted that there are two other names in the camera credits, Huang Wenhai and Lei Peifeng; I don’t know the division of labour among them, but I have assumed that Wang directed the camerawork.) The camera height must be low so that he doesn’t look down on the three young girls. When Wang follows them as they walk through the village and the surrounding fields, the camera must be behind them. Consequently we see the vistas before them, but I found myself more engaged by their work, whether it be herding sheep or collecting dung. Sometimes the camera wavers violently as the land becomes particularly uneven; apparently Wang made do without a Steadicam.

But like the Straubs, Wang searches for the “strategic point,” the single position from which all the action of the scene can be recorded. Caroline Champetier, who worked with the Straubs on Class Relations, has aptly expressed what is at stake in this search: “All the work comes in attempting to respect the existing space, as intelligently as possible, to render account of its lines of force; it is important not to falsify the lines.” The difficulty for Wang was discovering this point in the cramped rooms of a small hut. What are the lines of force? They are defined, first of all, by sources of light, the fires, and the doorways, the television set in the aunt’s house. Beyond these, the camera finds slight diagonals that emphasize the same few possessions, bowls, a stool, or a basket. Outside it is a matter of finding the right distance from the people and knowing when to stop to let them move off into the distance. For Wang, the camera must not be too close: the people are always shown full figure. Only when they stop will he sometimes move in for a closer shot, and these shots provide the strongest sense of exhilaration in the film.

I’ve tried to praise some aspects of Three Sisters, but for all that I’ve thought and written about it, I still can’t explain why I have the feeling that I could watch these people forever, although the more I watch the film, the more Yingying breaks my heart.

Posted in CS54, Features, From The Magazine