Features | The Poetics of Departure: Kurosawa at 100 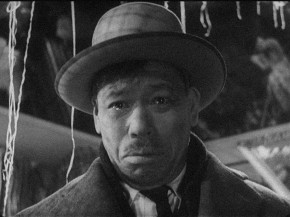 Gauging an artist’s relevance is always a highly subjective affair, particularly as there are any number of ways in which such measurement can be made. The lure of the new—or rather, the previously undiscovered or underappreciated—has been a potent force in cinephilia over the last several years, yielding up scores of hosanna-ready auteurs ripe for fanatical study. Yet the Big Three of mid-century cinematic modernism—Bergman, Fellini, and Kurosawa Akira—nevertheless still hold pride of place in cinematic currency (or at least North American cinematic currency), if only by virtue of the institutional scale on which their work is celebrated. With the exception of Hitchcock, there are likely no other filmmakers who have maintained such a degree of general cultural presence even distinct from their actual films, their names developing into a kind of lingua franca of film culture, providing instant mental images as vivid as they are unspecific. While even such celebrated contemporaries as Rossellini, Resnais, Antonioni, and Godard signify, to the vast majority of readers and viewers, certain moments in film history—moments that often handily obfuscate the voluminous remainders of their respective careers—each member of the holy trinity has been granted something of a transhistorical unity, a completeness largely denied the others.

The decades-long process of this sanctification across the journalistic, academic, and economic spheres would doubtless prove a fascinating subject for a study of cultural positioning—alas, for the far more modest ends and restricted focus of the present, the demon of subjectivity (hopefully at least an informed subjectivity) will have to suffice. The centenary celebrations for Kurosawa—including the imposing AK 100 DVD box set from Criterion and a touring retrospective landing at TIFF Cinematheque in June—prompts the question of why his presence among the most active and engaged sectors of present-day cinephilia feels so pallid. Certainly this has more than a little to do with the old dance between familiarity and contempt. Irrespective of the palpable difficulties he encountered in actually making films after his split with Mifune Toshiro post Red Beard (1965) and the dismal box-office failure of 1970’s Dodes’ka-den (which famously prompted his suicide attempt), Kurosawa’s name has been hallowed among Western cineastes for so long that viewing his films was almost de rigueur—a reputation reinforced for a certain generation by the fact that Kurosawa’s were among the first “art house” films made readily and widely available on video. To speak solely from the vantage point of that privileged yet still oddly cloistered cinephilic cohort, Kurosawa’s films were rites of passage that were, precisely, to be passed: sparking an awareness of cinema’s possibilities beyond the multiplex, they could be consigned to nostalgic memories of youthful experimentation as ever wider and less travelled cinematic frontiers began to open up.

This blinkered perspective aside—assuming that works made at such a high level of skill and refinement could even be properly processed and judged by dulled teenage eyes—there nonetheless remains the nagging feeling that the weight and (hopefully) wisdom of experience does little more to illuminate the breadth of Kurosawa’s art. The reliable old saws—humanist moralizing, the balance between the individual and the group, hard-edged visual dynamism, and a keenly astute narrative control—still seem more than capable of encompassing him; and if those attributes are far from negligible, they afford only so many avenues of interpretation. The difficulty of discussing Kurosawa beyond these confines is handily exemplified by Yoshimoto Mitsuhiro’s study Kurosawa: Film Studies and Japanese Cinema (2000), which in attempting to place Kurosawa as a cultural figure—as a mediating presence between East and West, bearing the burden of representing certain ideas of “Japaneseness” for each—must often operate within the same humanist-individualist-moralist prism it seeks to deconstruct when the films themselves prove less than conducive to theoretical pyrotechnics.

While it is always welcome when films are able to stymie the appropriative tendencies of academia (though this is unfair to Yoshimoto, who provides much useful historical-contextual material in between his more performative manoeuvres), this rather frictionless quality found in so many of Kurosawa’s films—the inability to do anything with them beyond that which they themselves set out to do—perhaps hints towards the slightly dispiriting quality of Kurosawa’s mastery. Particularly in his modern-day (gendaigeki) films—though the squishy moralizing amidst the ostentatious flamboyance of Rashomon (1950) certainly consolidated the more plodding iterations of that tendency in his ‘40s output—the rigid purposefulness of his phenomenal talent, the ruthless focus towards his desired thematic-aesthetic ends, blocks that interpretive space wherein the viewer can become a participant in the work.

To a certain extent, this quality is a symptom of his particular modernist moment. Like such far-flung contemporaries as those mentioned above (Rossellini, Bergman, Resnais, Antonioni), Kurosawa’s cinema sought to yoke formal innovation to moral reflection and instruction. The perils of the atomic age, which Kurosawa would deal with explicitly in the lugubrious I Live in Fear (a.k.a. Record of a Living Being, 1955) as would Bergman in Winter Light (1962), brought a new urgency and fervour to the universalist aspirations inherent in so much of prewar modernism. Accordingly, the formal play of the postwar modernists—whether through narrative (Kurosawa), psychology (Bergman), phenomenology (Antonioni), temporality (Resnais), or spirituality (Rossellini)—did not attempt to simply reflect the experience of an increasingly fragmented existence, but to diagnose the source of that fragmentation and suggest, however faintly, its correction. And at the time of their release—or, rather, their delayed appearance in North America—it was primarily on these moral-humanist foundations that the films were assessed by the great majority of Anglo-American critics, even the sharpest of whom (see Andrew Sarris on Muriel [1963]) were inclined to scorn the more obtrusive stylistic gambits of a Resnais or an Antonioni as empty formalism at the expense of human feeling.

The unofficial formalist turn of later criticism and academic scholarship, however, had quite the inverse effect on the terms of judgment: precisely an uncoupling of modernist formalism from the postwar humanist paradigm that had helped to bring it about, and often with it any pretensions to making meaning out of the works. To a great extent, it’s this moment in which we continue to operate today; and it’s for this reason that Resnais and Antonioni are far more viable objects of critical reclamation and celebration in hardcore cinephilic circles than a Kurosawa or a Bergman (though the contemporary celebration of the latter pair compared to the far more controversial former surely plays a role in this as well). For present-day critics and scholars, the formalism of Resnais or Antonioni offers a usefully detachable quality, an ability to be separated from the weighty “meaning” (or play with meaning, in the case of Resnais) of their authors and made pliable for various avenues of critical approach.

Kurosawa, on the other hand—though his kinetic techniques have proven readily appropriable by scores of subsequent filmmakers—rarely affords this kind of interpretive openness, his masterful control of the frame channelling meaning towards a single destination. Granted that Antonioni’s increasingly precious visual sense throughout the ‘60s offers a comparable case of compositional micromanaging, but in his case it is always the opaque factualness of the image, however manipulated, that takes precedence, not its symbolic valence. Kurosawa’s didacticism runs deeper: the freighted assertiveness of his images, their weddedness to the most stringently purposeful conception of narrative, disavows that ruminative space wherein critical performativity can function—which, however suspect much of it may be, is still one of the crucial means of renewing the timeliness and value of artworks.

It’s this proprietary quality about Kurosawa that is most discouraging when viewing his brilliantly designed works today. There is a nagging, worked-over quality to so many of even Kurosawa’s most indelible images, the sense that the narrative has rigorously prepared us for them and locked their intended effects firmly in place. Ironically, for one of the cinema’s most adept visual artists, many of Kurosawa’s designated “big moments” often play better on the printed page and in the mind’s eye than in their prepackaged screen visualizations: Mifune’s mad businessman mistaking the sun for the nuclear-ravaged Earth at the conclusion of I Live in Fear, or even Shimura Takashi’s dying Watanabe on his swing in Ikiru (1952), for example.

Indeed, absent any iconoclastic intent it would be appropriate to locate in that particular touchstone of humanist cinema the nexus of many of Kurosawa’s key problems. To begin with, contra Kurosawa’s reputation as a master of narrative, the script for Ikiru (by himself, Hashimoto Shinobu, and Oguni Hideo) displays the same tendencies towards lopsidedness that cripple Drunken Angel (1948) and 1950’s Scandal (not to mention the dreadful One Wonderful Sunday [1947], perhaps Kurosawa’s worst film); its needlessly bifurcated structure—with an omniscient narrator and chronological progression giving way to subjective flashbacks during Watanabe’s wake in the film’s second half—impedes the story’s intrinsic emotional pull. More damning, however, is the relentlessly unidirectional construction of his images, the ostentatious symmetry of line and forcefulness of presentation that consciously strives to amplify (or grotesquely exaggerate) the film’s otherwise crystalline pathos, evident not only in the showy grandiloquence of the film’s more famous moments (the forceful cut from the pathetic, sobbing Watanabe to the certificate for 25 years’ service on the wall; Watanabe’s singing along to an old love song in a cheap gin joint, which immediately hushes the raucous crowd), but even in the most passing of scenes. After soft-pedalling the severity of his patient’s disease and sending him on his way, Watanabe’s doctor sits pensively in his office with his assistant and nurse, in a pleasantly triangular receding-depth composition. “What would you do if you only had six months to live, like him?” asks the doctor rhetorically, while the nurse’s face, in the middle distance below his left elbow, looks off quietly into space. An appealingly multidirectional scene, this, with three separate yet paralleled emotional experiences sharing the same filmic space—all of them brought bluntly together a second later when the doctor swivels in his chair and asks the same question, directly, of his two subordinates, forcing the nurse’s punchy and reductive response (“the barbiturates are over there”).

Like his contemporaries and countrymen Ozu and Mizoguchi, Kurosawa knows how to activate the space in every corner of the frame; however, unlike Ozu’s remarkably vivified still lifes—the streets, clotheslines, and office-building skyscapes that give off the intangible aura of a thousand independent yet interconnected existences—he shunts each element into a single channel. It is Kurosawa’s consistent inability to subordinate himself to the autonomy of the images which he was so gifted in conjuring, to let them unfold into multiple paths, that places him below Ozu or Mizoguchi, filmmakers who possessed this quality intrinsically—or rather, rigorously refined their skills all the better to allow those images to take leave of them. Rather than monolithic fixity, it’s this poetics of departure that offers the timeliest means of navigation for a film world exploding outwards exponentially. That Kurosawa’s images could occasionally achieve this relinquishment of meaning—in the final confrontation between Mifune and the kidnapper in High and Low (1963) or Seven Samurai (1954) in its near-entirety—warrants his inclusion in the canon, even as his lessons become ever more distant from our needs in the present.