Dancing on the Edge: Derek Jarman’s Will You Dance With Me?

Max Nelson/CS62, Features, From The Magazine 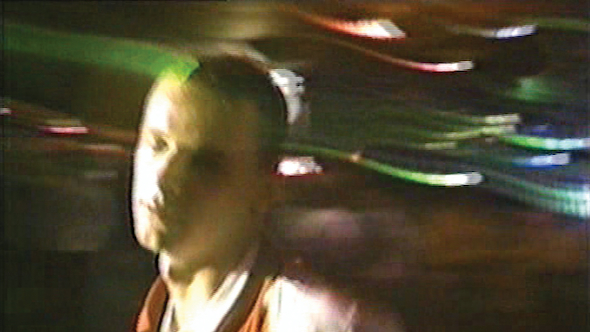 Derek Jarman’s quarrel with Thatcherism derived from all the causes one would expect—and some, perhaps, that one wouldn’t. Reading and watching the artist’s varied critiques of the Conservative prime ministry that ruled Britain for much of his working life reveals that there were always several Jarmans living in improbable harmony with each other: the urbane, long-time London bohemian deeply committed to the preservation of England’s ancestral agrarian past; a pragmatically minded social reformer with an unexpectedly romantic, fanciful cast of mind; a filmmaker (and a painter, writer, and gardener) equally attracted to urban dinginess and gossamer, paganistic wispiness. It is this latter, more pastoral Jarman to whom it’s tempting to attribute the sneeringly sarcastic prose piece from 1986 in which he imagines himself having served three terms of office as Thatcher’s Minister of Horticulture:

At nights we discussed history, tulipomania in 17th-century Holland, Russell lupins, hollyhocks and mimosa—my grandmother’s favourite flower. We had in common a dislike of pinks, both the flower and the colour. She also hated red, as it turned to noise on video.

“She was keen,” Jarman adds in a parenthetical, “on video.”

Thatcher was the thing Jarman hated most, and the thing to which, throughout the ’80s, he kept returning with feverish intensity. (After being diagnosed as HIV-positive at the end of 1986, he wrote, he made it his goal to “survive” her.) She was the reason that, on many of his real nights in the early-to-mid-’80s, he lived a kind of subterranean shadow-life in London’s gay bars and dance clubs, “the dungeon redoubts of the gay world,” as he put it in his 1984 autobiography Dancing Ledge. Here secretive “inmates” would “shout themselves hoarse against the disco music and lasers,” glad to have entered a world that—in Jarman’s words—“eschews the overground reality which rejects it, and seeks perfection in an ideal favoured by low lights, denim, leather and the rest.” (The man writing those lines about rejection wasn’t yet campaigning against the infamous clause in the Local Government Act of 1988 that prohibited the “teaching in any maintained school of the acceptability of homosexuality as a pretended family relationship.”)

When Jarman suggested that the thousands of men frequenting London’s gay clubs were “seeking perfection” or pursuing an “ideal,” he had in mind something more pastoral and Arcadian than many of those “inmates” themselves would have cared to admit. When he met Paul Reynolds at several such clubs early in 1984, Jarman was captivated by the young man’s majestic bearing, chiselled Greek beauty, and exilic, melancholy air. (“I thought he had an amazing face, moody with great sadness,” the director later wrote. “He seemed set apart.”) The film in which he cast Reynolds later that year, The Angelic Conversation, is a hushed, bucolic, ethereal love story between two men, shot on woolly Super 8 and set to a reading of Shakespeare’s sonnets by soon-to-be-Dame Judi Dench. It was Jarman’s vision of the kind of love from which he, as a gay man, was barred under Thatcher—a love that he associated, in the movie’s lengthy scenes of the two men drifting together and apart across secluded rural landmarks in Dorset, Somershire, and Kent, with the old, pagan English landscape that Thatcher’s aggressive policy of commercial expansion was working to efface.

At the time, Tony Rayns worried that The Angelic Conversation bordered on “a homosexual version of heterosexual kitsch”—which is, I think, to miss the significance that “kitschy” old English iconography (roses, hollyhocks, mimosas, jagged cliffs, mist-shrouded valleys and the like) takes on in Jarman’s work. In his writings and to an extent in his films, Jarman associated the denial to gay men of such luxuries—what he might have called their Arcadian inheritance—with their confinement to urban “dungeons” where lasers flashed and AIDS was mysteriously, fatally spreading. It was in this sort of mood that in September 1984 Jarman visited Benjy’s, a bar in East London’s Mile End district, to participate in a trial location shoot with his friend Ron Peck, whose 1979 Nighthawks was (and for many still is) the great cinematic portrait of urban gay life in Thatcher’s England. The images Jarman collected there—which had their first public screenings in 2014 under the title Will You Dance With Me?—were shot on a handheld video camera and gathered, unedited, onto a tape for Peck’s benefit.

Most of Jarman’s best-known nonfiction and hybrid work—the home movies compiled after his death as Glitterbug (1994); the footage he shot in Moscow in 1984 and pieced together into the essayistic Imagining October (1988); the trancelike superimpositions that make up In the Shadow of the Sun (1980)—was shot, like The Angelic Conversation, on Super 8, a format of rough-hewn textures and vivid, overbled colour schemes. Like his fictional Thatcher, Jarman was “keen on video” in part because of the contrast it offered to the format in which he’d been accustomed to work. The texture of Super 8 resembled paint thickly applied, its pleasures tactile, crackling, dusty and earthbound; video, by contrast, was a format for filming ghosts. Bright lights shot on a mid-’80s camcorder (like the lasers in Benjy’s) would linger in the frame for seconds after they had left it, leaving the next image streaked with vapour trails; gestures and movements were drowned in analogue noise, colours either muted or psychotically intensified, sharp lines broken into jagged, cross-hatched interference patterns. If Jarman’s love of Super 8 was partly a matter of the format’s affinity with painting, his interest in video derived, perhaps, from his curiosity about the musical possibilities the medium gave him, the chance to create phantom afterimages between frames the way certain pianists manage to generate phantom sounds between notes. (Godard liked video because, unlike film, you could “play it.”)

It’s for this reason that, in Will You Dance With Me?, the club scene that Jarman described in his writings as a kind of prison can come off, when viewed from certain angles, as a place of utopian social inclusivity. Here, dark- and light-skinned dancers share the floor with apparent ease; an aging white-haired man in a tight sleeveless top saunters jauntily among much younger boys; two women (one slightly frumpy and equipped with huge thick-rimmed glasses) dance with abandon under the glare of the spotlights. That this urban Arcadia was also a place of deep suspicion and anxiety is a subtext the footage approaches more cautiously and with greater tact. AIDS was a known threat by 1984; “it casts a shadow,” Jarman had written the previous year, “if even for a moment, across any encounter.” (In a pivotal passage from Will You Dance With Me?, a group of men take turns glancing at Jarman’s camera with leery, thinly disguised mistrust.)

That shadow was compounded by an older source of social anxiety for the urban gay communities in which Jarman moved: the fear of letting the secret life you pursued at night intrude on, or interfere with, the movements of your daytime self. “In dungeons,” Jarman wrote, “pure anonymity prevails”: dress was carefully coded to suggest a sexual preference, leaning or type; glances were subtly exchanged, courtship rituals performed silently and, sometimes, namelessly. Cruising was a lonely pastime: “In Ron Peck’s film Nighthawks,” Jarman remembered, “I played a very creditable cruiser, so lost in myself that I burnt my fingers instead of the cigarette.”

The handful of nameless protagonists in Will You Dance With Me? are, in contrast, granted another, more assertive kind of anonymity. The lonely young man reading in one of the booths during the film’s opening minutes; the skilled breakdancer on whom Jarman lingers after the camera slides onto the floor; that haunted-looking aging dancer; that short, heavyset woman hidden behind her glasses—these are characters to a greater degree, arguably, than many of the central figures in some of Jarman’s finished features, and the camera circles them graciously, adapting its movements to their positions in space, both encouraging and feeding off of the force of presence they project.

The compilation’s last ten minutes are given over entirely to one young man on whom Jarman lingers reverently. Jarman’s camera is at its loosest, most playful and least inhibited in these final scenes, framing the man so that the spotlights’ vapour trails swirl around his body like ribbons, tassels or drapes. The dancer is Phillip Williamson, whom Jarman would go on to cast alongside Paul Reynolds in The Angelic Conversation, and it’s striking to see him transplanted, in that film, from the “dungeon redoubts” of East London to the cliffs of Dancing Ledge, the Winspit caves, and the Isle of Grain.

One of the great benefits of seeing Will You Dance With Me? is that it makes The Angelic Conversation seem less indulgent and more necessary: it clarifies what the later film is seeking to escape from, just as The Angelic Conversation gives a clearer picture of the “perfection” for which Jarman believes the dancers in Will You Dance With Me? are striving. In Jarman’s theology, The Angelic Conversation is the Eden to the fallen, fractured world the director would show in The Last of England (1987), in which there’s no corner of the country that isn’t a dungeon: one of that film’s recurring images is of a beautiful young man (who could be a double for Reynolds and Williamson) crouched in the corner of a warehouse shooting up. But even in Conversation’s idyllic final image—of Reynolds caressing a rose while Williamson, superimposed over the other man’s face, treads water in some distant ocean—there is the suggestion of things already gone, a world already fallen. It hints that England was incapable of incorporating homosexual love into its national mythology—though as Jarman suggests in The Last of England, this may also have been a matter of the nation’s no longer having an ancestral tradition to revise. “The household gods have departed,” Nigel Terry reads in that film’s opening voiceover monologue. “No one remembers quite when. Poppies and corncockle have long been forgotten here, like the boys who died in Flanders, their names erased by a late frost that clipped the village cross.”

England, as Jarman wrote around the time of the film’s production in his book Kicking the Pricks,

was once the home of dryads and nymphs, every now and then you can feel the last of them lurking around a corner: at Dancing Ledge, at Winspit. But much of the land is desolate. Cornwall is a wasteland. Sad Goonhilly with its tracking disks. Lands End.

For Jarman, 16mm and Super 8 were the best means with which to catch, as he might have put it, the dryads lurking around Britain’s corners. It was in those formats that he spoke with authority, that he made images that seared and cut. (The shattering power of his last film, Blue [1993], depends in part on watching the pure cobalt film strip take on more wear and tear as it passes through the projector’s gate.) Video was comparatively debased, impure, the sort of thing on which Thatcher might have been keen. But it was perhaps precisely for this reason that it so attracted Jarman as a means of filming the shadow-lives many men lived in London’s other underground, and writing those lives into a new kind of national myth.

Posted in CS62, Features, From The Magazine