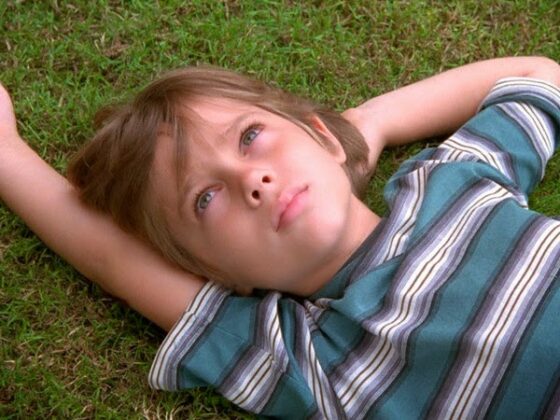 Shot from 2002 to 2013, Richard Linklater’s Boyhood charts a dozen years in the life of a family: Mason Jr. (Ellar Coltrane), Samantha (Lorelei Linklater), Olivia (Patricia Arquette), and Mason Sr. (Ethan Hawke). Related mainly from Mason Jr.’s point of view as he and the actor who plays him ages from six to eighteen, Boyhood is somewhat unprecedented as a cinematic gesture, wearing its formal concept so casually that it can be an overwhelming experience precisely for the disconcertment it provokes. Here are 12 aspects of it—one for each year that the film covers—that attempt to explain what Linklater and his collaborators might be up to.

1. A longitudinal experiment, the likes of which are rare in cinema. Michael Apted, François Truffaut, David Perlov, Michael Winterbottom, James Benning, Eduardo Coutinho, and Linklater previously (in the Befores) have all designed projects that return to the same real-life or fictional characters after lengthy intervals, but Boyhood, unlike some of its precedents (i.e., Apted’s Up saga), exists as a kind of high-concept film that doesn’t have any interest in calling attention to its concept. Linklater’s strategy is to bury each of his 12 yearly ellipses in discreet, quotidian moments, and although plenty of visual and aural signifiers are employed (shifting family dynamics and hairstyles, pop songs that came and went), they could hardly be called gimmicks. Linklater once said, “You can only be clever in a film once,” which could function as a motto here.

2. A logistical anomaly. By all accounts, Boyhood shouldn’t exist. No one in the cast or crew was legally bound to the project for more than seven years, the film’s chief financing entity (IFC) could have folded or lost interest, and even Linklater could have been lured away by other, more appealing or pressing activities. Still, the project resisted every difficulty presented to it (including, in one episode, trying to make a very pregnant Arquette appear not so) and came out remarkably consistent. It’s an impressive feat for a director to have patiently negotiated such an outcome—even more so if you consider that Linklater directed nine other features while working on Boyhood.

3. A home movie. Aside from the trivia that some of Linklater’s own personal artifacts—such as Mason Sr.’s vintage GTO—show up in Boyhood, the filmmaker’s placement of his eldest daughter, Lorelei, in a prominent role, and his two youngest, Alina Mae and Charlotte Rona, in one scene, lend the film a family album-like quality. These are more than smart set-dressing or casting solutions: see, for example, a scene where Lorelei’s Samantha performs to a Britney Spears song with such gusto that one can imagine Linklater plucking a version of the scene from a (real) family dinner.

4. A central and southern Texas ethnography. Like Dazed and Confused (1993) and Bernie (2011), Boyhood affectionately catalogues the peculiarities of Linklater’s home state. Early on, Mason Sr.’s eager Obama campaigner is contrasted with a Confederate flag displaying reactionary slogans that his kids run into while planting campaign signs in neighbours’ front yards. Even though the owner of the flag is painted as an aloof racist caricature (Clint Eastwood’s Walt Kowalski is not far off), Linklater mitigates this by showing how Mason Sr.’s liberal idealism mellows after he marries into a conservative Christian family. Resigning to his surroundings, Mason Sr. doesn’t even wince when Mason Jr. receives a personalized Bible and a rifle from his new step grandparents as birthday presents. These outcomes might be typical of a larger American experience, but since the film is set in Texas, and Linklater knows the place like no other, Boyhood’s observations about politics and religion feel particularly astute.

5. A quest for truth. It sounds pretentious to say this about a film that’s basically free of any heavy-handed gestures, but the hidden aim of Boyhood is to dismantle that convention in mainstream narrative cinema that characters’ lives have to be defined by prescribed momentous events (first kisses, nuptials, etc.). Mason Jr.’s personal trajectory is never forced upon us; he becomes assertive and more interesting over time. This makes his maturation plausible in a narrative sense (and the film’s conclusion satisfying), but also aligns with the film’s philosophical view that life’s substance is found in the in-between moments. Linklater seems content to offer us scene upon scene with little charted progression other than that which can be physically evidenced by the aging process. Boyhood’s linearity is disconcerting for its lack of movie-world artifice; even small details, like Mason Sr. showing his kids how to skip a stone, enrich the film’s overall examination of the real.

6. A film by Richard Linklater and a partial autobiography. There are nods to Linklater’s previous films dropped in for fun (David Blackwell reprises his role as the liquor store clerk who sold Wiley Wiggins’ Mitch a sixer in Dazed and Confused), but it’s the feeling that Boyhood functions as part-autobiography that’s most intriguing. Linklater was born in Houston and raised in a lower-middle-class environment by a single mom (who was surely the model for Arquette’s Olivia), and the economic constraints of the family’s living situation that we see in the film are depicted in a way that seems to come from first-hand experience. Beyond that, Linklater has remarked that specific scenes—such as when Mason Jr. digs up a bird that he buried a few days earlier to see how it’s decomposing—are recollections from his own childhood. Mason Jr.’s development as a photographer, however, is distinct from Linklater’s trajectory as a high-school baseball prodigy: if the film were strict autobiography, Ellar Coltrane’s character would have evolved into a jock who goes to college on a sports scholarship.

7. A time capsule of the United States in the ’00s. Linklater has the intelligence to allow history to impose detours and leave its marks on his film; it’s a work that’s dated on arrival, and that’s exactly the point. Some of the pop-culture zeitgeist of the era (notably, Harry Potter mania) is included purely for the sake of it, while discussions of Bush and Obama are more pointed and lend greater emotional complexity to the film. In a stand-out exchange, Olivia’s third live-in partner, ex-Marine Jim (Brad Hawkins), talks about his tour in Iraq and what set his unit apart from others—a scene that not only challenges the notion that Marines are not independently minded, but also illuminates the xenophobia that led to so much needless violence during the occupation. If, as Christian Metz said, most films are difficult to explain because they’re easy to understand, Boyhood works against that grain: it’s easy to explain because it’s difficult to understand, “difficult” because it’s as much about dealing with our collective American history post-9/11 as it happens as it is about the narrative at its centre.

8. A tribute to observational cinema. Linklater has remarked that his first feature, It’s Impossible to Learn to Plow by Reading Books (1989), was directly inspired by the unassuming, observational style of Chantal Akerman and James Benning, and Boyhood also seems to be taking cues from these filmmakers in its insistence on examining and attempting to reveal poetry in the ordinary. The film’s opening image of Mason Jr. staring up at the sky (a wink to Benning’s model of “looking and listening”) sets the contemplative tone of much of what’s to come. If there’s any work in Linklater’s filmography that Boyhood most resembles, it would be this first feature; even if the earlier film has virtually no dialogue (which Boyhood, admittedly, has quite a lot of), it shares with Boyhood a seamless design that’s basically at the service of nothing much happening, in the ordinary sense.

9. A film with incidents. Boyhood depicts Mason Jr. often surrounded by his grade- and high-school peers, many of whom we only see once or twice over the course of the film; near the end, for example, he invites a friend to tag along to his family graduation party, and the emphasis of the scene shifts casually to the friend’s timidity as he’s surrounded by people who he’s never met before. Inconspicuous details such as these keep adding up over the course of the film’s 164 minutes, deployed not necessarily to comment on Mason Jr.’s development so much as to create a sense of the transitory. Linklater’s cinema has never been about predestination or fate. There’s no holistic belief system at work: things just happen. For example, in the film’s most nightmarish episode, Olivia’s second live-in partner, a divorced college professor with two kids of his own named Bill (played by Austinite Marco Perella), lets alcoholism violently unravel his family life, an outcome no one could have wished or expected.

10. A film about motherhood. The film’s title is somewhat misleading: if Boyhood certainly chronicles Mason Jr.’s experience, it also allows us to see Mason Sr. and Olivia mature alongside their son. Olivia herself resides at the core of the film, heroic for her resilience and commitment to her kids, and tragic for her inability to make suitable decisions for her long-term happiness. Arquette is so sublimely perfect, so believable as a single mom struggling with poverty (even maintaining the same bad haircut for much of the film), that when her character finally breaks down toward the end, she achieves the kind of saintly purity that one associates with certain Bresson characters.

11. A film about fatherhood. In the first episode of the film, Mason Sr. is absent—we’re told he’s gone off to Alaska—but he soon returns to earn the family’s trust again, with somewhat middling results throughout. Olivia’s interim suitors turn out to be duds, and we see Mason Sr. suddenly grow into a hugely sympathetic, albeit somewhat squarish, model for both Mason Jr. and Samantha. Relinquishing his GTO for a minivan, trading in slacker duds for church casual, and earnestly foisting onto his son a post-Beatles compilation of the best of John, Paul, George, and Ringo’s solo projects, Mason Sr. is a cliché an earlier version of himself may have loathed, but as he comes full circle he understands the trade-offs better than anyone. “What’s the point? I sure as shit don’t know,” he says, hoping to strike a resonant chord with his imminently off-to-college son. “We’re all just winging it.”

12. A self-aware film. As Mason Sr.’s final nugget of wisdom may indicate, there’s a certain reflexivity at work here (and would anyone have expected otherwise from the director of Waking Life [2001]?); Olivia articulates what the audience has been thinking all along when she describes her life as “a series of milestones”: “Next it’ll be my funeral.” It’s a cheeky gesture to be sure, but one that nevertheless manages to be completely devastating. As a counterpoint, when Mason Jr. follows his new college friends on a drug-enhanced hike through Big Bend, the emphasis is shifted to the present, as he observes, looking out towards the limitless horizon (and us), “It’s, like, always right now.”