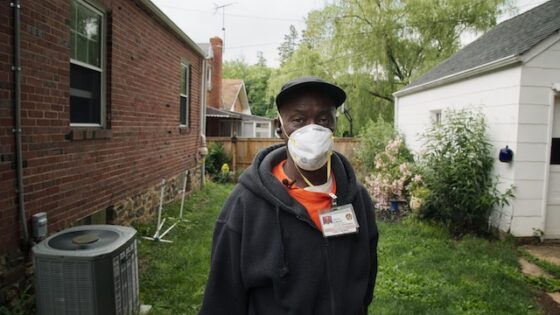 Searching society’s margins for cultural lifeblood is a timeworn trait of nonfiction cinema. With Rat Film, director Theo Anthony goes one step further, looking to the gutters of Baltimore, Maryland, for evidence of the city’s muted pulse. Aptly premiering in Locarno’s Signs of Life program, Anthony’s debut feature takes as its nominal subject Baltimore’s most pervasive pest, the Norway rat, and looks backward into history and forward into the future to paint a holistic portrait of a blighted culture whose marginalized populace has been reduced in the eyes of those in authority to an untoward burden, not unlike their storied vermin infestation. (Anthony is quick to point out Dawn Day Biehler’s Pests in the City, among other books of sociological relevance, as a key textual touchstone.) Anthony has parlayed such contrivances into an ethnographic study of institutionalized racism that locates some primal, uncomfortable affinities between man and beast—or, as Harold Edmond, member of Baltimore’s publicly funded Rat Rubout Program, declares: “It ain’t never been a rat problem in Baltimore. It’s always been a people problem.”

Edmond, a working-class African American diligently driving his pick-up truck from job to job, acts for the viewer as something of a tour guide through the city’s most plagued areas, his words a quasi-thesis statement for the film’s larger sociopolitical analysis. He makes house calls and inspects municipal properties, matter-of-factly taking stock of each situation while offering humorous correctives to clients who attempt to combat rodent troubles on their own. After decades of service, he’s as pragmatic as he is perceptive. “That’s where you gonna find a rat, in the places where most uneducated people are,” he says. “The ones who have the least resources, the people who have no dreams, no aspirations—just survival.” At the other end of the spectrum are two of Anthony’s most colourful subjects, a pair of unemployed men who spend their time hunting rats through a convoluted process that involves peanut butter, turkey meat, a fishing pole, and a baseball bat—an only slightly less refined technique than the compressed-air rifles and blow-dart guns used by Matt the “Rat Czar,” a garden-variety local with a beer gut, dirty-blonde beard, and trucker hat. (“Right in the head, no suffering,” he says as he dangles his bloody prize by the tail.) Perhaps it’s the shared milieu, but in these stranger-than-fiction moments we appear not far removed from the perverse pastimes so indelibly portrayed by Baltimore’s most infamous son, John Waters, whose Desperate Living (1977) auspiciously announced itself with an image of a cooked rat on a dinner plate.

These characters and their unique methodologies could easily make for the subjects of their very own film, but Anthony, a multidisciplinary visual artist and journalist who recently produced a short film and a series of photo essays concerning the uprisings in Baltimore following the murder of 25-year-old civilian Freddie Gray, has more on his mind than pest control. Instead, telescoping outward from these lowly rungs, Anthony takes up issues of class, race, and civic injustice, finding in the plight of the Norway rat an unfortunate correlation with a community that historically has been ostracized in a manner unworthy of even the most ignoble of species. Covering a vast amount of ground in a relatively brief amount of time, Rat Film opens with a creation myth that posits the rat as an agent for the birth of the cosmos, before tracing in a roundabout manner the history of institutionalized racism in Baltimore and the systematic manner in which it continues to be reinforced. Accompanied by a droll, vaguely mechanized voiceover by Calgarian Maureen Jones, whose semi-ironic tone is pitched somewhere between comedy and commentary, the film is structured as a series of diversions, alternating episodes with residents on each side of the class divide—who correspondingly hold very different affinities for the rat populace—with archival passages concerning the city’s residential segregation or conversations with bureaucratic representatives. Though the narrative syntax remains loose—at times threaded together only by Dan Deacon’s prismatic synth score—the film’s topical agenda remains hyper-focused; without mentioning Baltimore’s recent racial controversies, Anthony manages to illustrate an entire lineage of sociopolitical discrimination by tracing ongoing oppressions to their inception points.

Juxtaposing the city’s passing of residential segregation laws in the 1910s with the concurrent advancements made in rat poison by Johns Hopkins psychobiologist Curt Richter, Anthony, working as both editor and cinematographer, establishes an effective thematic base from which to pivot and proceed through history, from an all-too-familiar past and beleaguered present to a vision of a utopian future. Though pitched toward an idyllic horizon, the director’s investigative tack, reminiscent at times of Harun Farocki’s dialectical impulses, suggests that not even technology—let alone science—can fully reconcile such disparate states. The very term, “social science,” takes on troubling new dimensions as Anthony draws parallels between legislation and extermination. In the ’50s, Dr. David E. Davis advanced on Richter’s findings by taking “the lab into nature,” as Jones explains in voiceover; his conclusions—“control the environment, control the rats”—prompted a wide-scale revision of Baltimore’s housing codes, a noble initiative that proved difficult for the city to maintain. No wonder, as two decades earlier the Federal Housing Administration implemented the Residential Security Map, a colour-coded grid used by everyone from loan officers to housing developers that assigned colours to neighbourhoods based on class, race, and income; almost one hundred years later, the map’s divisions still match each district’s present-day condition.

The film’s most potent passage, however, concerns behavioural research scientist John B. Calhoun’s overpopulation experiments, which he began conducting in 1958 in the Gaithersburg barn of philanthropist Eugene Casey. For these tests, Calhoun constructed a large, multi-tiered, octagonal living space—what we might otherwise call a housing project—for dozens of rats, where they were kept and monitored for over one year. What transpired was less than ideal. Though well nourished and protected, the rats rebelled, turning vicious and in some instances cannibalistic as the dominant males established a stronghold on their surroundings. Reproduction halted, and females and weak-willed males died or were killed off, in the process creating what Calhoun called a “behavioural sink”—in this case a kind of rodent dystopia brought on by overcrowding. The implications are unnerving, and yet the sociological symptoms have persisted. As we learn, even Richter’s initial prescriptions were met with criticism—a choice rebuttal, cited by Anthony, compared Richter’s eugenic philosophy to that of Hitler and Stalin, maintaining that “the merit of science lies in the fact that where it cannot modify the individual to meet the environment, it offers hope of modifying the environment to meet the individual.”

As the film consistently demonstrates, time and technology have done little to mitigate the effects of such entrenched models. With the help of Google Earth, interludes resembling a makeshift video game interface—its crude animations suggesting the automated reality predicted by Chris Marker’s Level Five (1997)—visualize Baltimore as a static geographic space through which to navigate. But along the way programming glitches produce unintended thematic corollaries, as when the program’s facial recognition algorithm begins to identify inanimate objects as individuals to be abstracted, or when the user pushes too quickly through their surroundings, opening up chasms in the digital landscape that briefly reveal distant galaxies—the promise of a better tomorrow, perhaps, or the “New Baltimore” alluded to in voiceover as the film flirts with speculative (science) fiction in its closing moments? These digital defects and the interrogative manner in which they’re considered offer key insight through which to read Rat Film and its reflexive framework. In one of the film’s more seemingly discursive scenes, Bruce Goldfarb, executive assistant to Baltimore’s Chief Medical Examiner, explains the strange history behind a series of minutely detailed dioramas of unexplained deaths. He notes, though, that these mock-ups are “not meant to be solved,” and that some of them are in fact staged. “There’s an inconsistency between the information that you’re being told…and what’s visible in the diorama,” he says, an instructive assertion for a film predicated as much on social as stylistic discrepancies. On the basis of this most impressive debut, Anthony readily accepts and acknowledges cinema’s inherent duality, deigning not to depict  “reality,” but to represent truth as he’s found it. If Rat Film is a maze, then it’s one that offers rewards at every turn.