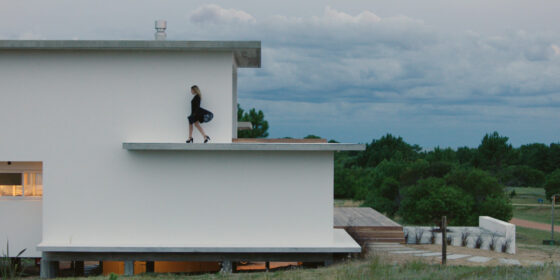 From the start of Gastón Solnicki’s Kékszakállú it seems like a boy’s boy’s boy’s world. In the opening moments three boys bound off a high diving board, followed by a girl whose hesitation is so prolonged the scene ends before we learn whether she follows suit or opts for retreat. We see boys fully focused on waxing their surfboards, while an arrestingly pretty doe-eyed girl simply looks on. An impossibly buff boy, wearing only shorts, does expert push-ups in a field. Several brisk scenes later the same buff boy—or perhaps it’s a different buff boy; they’re somewhat interchangeable—tends a garden. Boys know how to do stuff in Kékszakállú—except sissy stuff like insert shirt buttons into their corresponding holes. Thing is, they’re boring. Solnicki just wants to be with the girls, who are complicated, uncertain, sometimes fearful, frequently comical, always interesting. I use the term “girls”: some of the characters Solnicki follows are pubescent, while others are, strictly speaking, young women, but it’s the arduous transition from adolescence to maturity that occupies what stands for narrative here. “CHILDREN ARE THE RESPONSIBILITY OF THEIR PARENTS” reads a sign fastened to the ladder leading to the aforementioned diving board, but the sporadic appearances made by parents in Kékszakállú only serve to emphasize their ineffectiveness. Whatever follies these kids are going to encounter are long past their parents’ capacity for prevention or reparation.

Kékszakállú’s prelude assembles sundry sunny scenes of holidaying in Punta del Este, a Uruguayan resort zone of pools and luxury rentals, into the pastoral equivalent of a city symphony. Then, at the 15-minute mark, following the first of several ominous sonic intrusions from Béla Bartók’s Bluebeard’s Castle—“Kékszakállú,” not incidentally, is Hungarian for “Bluebeard”—the film’s title belatedly emblazons the screen and we transition to the overcast urban landscapes of Buenos Aires, home to the film’s characters and director alike. What proceeds over the next hour is only slightly less inscrutable than that prelude, as some thematic coherence begins worming its way into Solnicki’s initially improvised strategies. The film’s putative connection to Bluebeard’s Castle seems almost flamboyantly oblique, but there are resonances between Bartók’s iconoclastic, female-empowered variation on the oft-rendered folktale and Solnicki’s extemporaneous narrative, namely, the element of young women suspended on the precipice of apprehending some forbidden knowledge.

It’s back in Buenos Aires that a heroine emerges, the blonde and perpetually stunned Laila (Laila Maltz). At a small gathering where an octopus is valiantly boiled and prepped for consumption, Laila is counselled by a friend about the travails of moving away from home. You go from family life to solitude, the friend says, from a life where the refrigerator is always full to one in which “everything depends on you.” Laila has yet to make this leap. She’s still living with her dad, Javier, who admonishes her for eating in bed—in his bed, to be exact. She takes a job at Javier’s Styrofoam factory—one of a number of factories observed in the film—but spends most of her shift hiding out on the roof.

When not at home or feigning busyness at the factory, Laila is either searching haplessly for a suitable field of post-secondary study, spending time with girlfriends, or eyeing with suspicion virtually every activity she encounters, from key-cutting to the administration of a manicure-pedicure. As Kékszakállú slides into its third act and circles back to Punta del Este and yet more anxiogenic downtime, Laila is only more alienated by reality’s insidious assault. The film ends with Laila’s escape from paradise, hopping a nocturnal ferry with a single carry-on-sized suitcase en route to who knows where, culminating in an immaculately composed and photographed final sequence worthy of the eponymous opera that ostensibly provided Solnicki with his inspiration. Like a protagonist from Kafka or Hamsun, Laila exits the narrative with no clear path, drifting toward parts unknown.

The path that ushered Solnicki toward Kékszakállú, his third feature and first fiction, was just as wayward and circuitous. Süden (2008), Solnicki’s debut, chronicles the return of classical composer Mauricio Kagel to his native Buenos Aires after more than four decades abroad. Solnicki is first and foremost a music lover—all three of his features are named after musical compositions—and Süden is a gesture of devotion to musicianship and the particular passion and discipline it requires. Kagel’s first words in Süden, delivered in voiceover, go some way toward describing an itinerary for Solnicki’s journey as a filmmaker: “One does not choose one’s family, one’s religion, or the place where one is born. All this is arbitrary. One feels attracted to certain foods, a certain landscape…”

Solnicki is attracted to certain landscapes: gorgeous female faces and striking works of modernist architecture. To apprehend these vistas he needs to return to the resort region of his youthful summers, to contemplate his own advantaged roots, to begin the creative process with whatever is familiar. I mean this both figuratively and literally: at least four characters in Kékszakállú are family members, as is everyone seen in Papirosen (2011), Solnicki’s charismatic family album-as-film, which uses home movies old and new to divulge the gulf between generations, their experiences of hardship and self-actualization. Solnicki’s paternal grandparents were Polish Jewish Holocaust survivors; Solnicki’s father is a self-made man. Solnicki and his siblings, meanwhile, were raised in bourgeois comfort in Argentina, half a world away from their roots.

While wisely avoiding any whiff of either self-pity or familial resentment, Papirosen anticipates Kékszakállú by revealing just how paralyzing privilege can be. Solnicki’s sister trained to be a doctor but drifted into the buying and selling of haute couture clothes. Over the course of the film she separates from her husband and father of her children—all of whom appear in Kékszakállú. Neither she nor Solnicki’s brother appears terribly happy in the film. Where Süden joyfully shows us how seemingly non-musical elements—laughter, whistles, the turning of a telephone directory’s pages—can be drawn together to make something unified and artful, Papirosen takes something of the opposite route, showing how all the heritage, wisdom, and opportunity in the world can lead toward scattered families and lives seemingly devoid of purpose.

Which brings us back to Kékszakállú, a film of fraught fascinations, of fragmented spectacle gleaned through what was by Solnicki’s own report an audaciously aimless, desperate search for usable material. The film was made with little planning and no script—Solnicki may be drawn to 20th-century avant-garde music but his M.O. is all jazz, improvisations on the theme of young women in obscure peril. Solnicki confesses that his crew was seriously pissed off at several points in the making of Kékszakállú, yet the work on display in painstaking and precise. The film was beautifully photographed by Diego Poleri and Fernando Lockett, but it’s ultimately more beguiling because it genuinely found itself in the editing, which is credited to Alan Segal and Francisco D’Eufemia.

In the film’s signature scene, Laila gets ready for what we presume to be an evening out. All dolled up, she exits her second-floor bedroom’s sliding door for fresh air—only to lock herself out, with no way to get either back inside or down to the ground. As with that frightened girl on the diving board at the film’s start, this remarkable scene ends before we ever find out how Laila descends from her balcony prison. Solnicki captures the entire sequence in a master, rendering his heroine nearly as pinned within her opulent confines as the insects so exquisitely preserved and framed in the museum seen in the film’s post-title-card scene. Deadpan comical, the scene could almost be something out of Tati, but Solnicki would never have orchestrated it with anything like Tati’s masterful marshalling. Kékszakállú is a film whose every moment is the product of a nervous gamble, a young person’s search for a reason for being, and thus a beguiling mirror of its heroine’s journey.