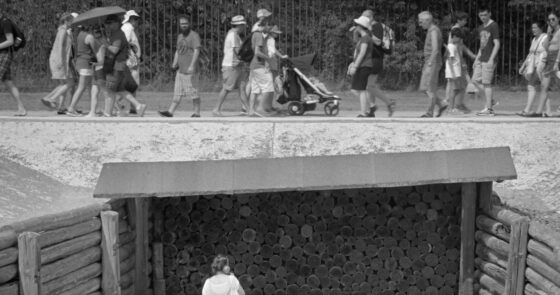 If poetry after Auschwitz constituted an act of barbarism, then what can be made of curious tourists eating sandwiches, or snapping self-portraits, on the lawns of former concentration camps now repurposed as museums? The question isn’t so much posed as interrogatively embedded in Austerlitz’s conceptual framework, in which “dark tourism” is subjected to a formally distanced yet skeptical gaze of its own, by way of a camera that is, to all appearances, indistinguishable from—and yet purely oppositional to—the ubiquitous memory tool of choice brandished by the idling hordes. Premised on the paradox of fleeting vigilance and historical sampling, Austerlitz extends from Sergei Loznitsa’s own visit to Buchenwald, where a source of unease arose from proximity to the living rather than the dead. If memorializing the Holocaust feels born of an ethical imperative to remember, such memorial tourism does not necessarily entail an act of conscience. It is from this doubly frightful position that Loznitsa, and by extension Austerlitz, at once recoils and embeds itself.

Appearing to take its title from W.G. Sebald’s haunted final novel, in which the past is exhumed obliquely, the lien on memory contingent, Loznitsa’s film derives its ethos—if not its pathos—from Sebald’s namesake character as he tries to understand the unknown fate of his parents: “….we also have appointments to keep in the past, in what has gone before and is for the most part extinguished, and must go there in search of places and people who have some connection with us on the far side of time…” What transpires, however, according to Loznitsa’s discreet but steely gaze at Sachsenhausen, is a mass visitation devoid of any visible manifestation of connection. There is an indecipherable essence to those who occupy Austerlitz’s static frames—we cannot know what any given person is thinking, what memories are being conjured—but on evidence selectively accrued by Loznitsa one might conclude that this is a stroll in the park of darker history, an atrocity exhibition with well-intentioned but ineloquent docents postulating on the efficacies of crematoria. The film invariably traffics in such stark disparities by virtue of its observational mode—the most facile being the collection of badly sloganed T-shirts; few came dressed for a memorial—but as with any effective deployment of structuralist cinema, an index of signification is bound up in each shot, revealed through duration, stasis, and formal repetition. The deep-focus photography of DP Jesse Mazuch accentuates the choreographic shuffle of the crowds en masse, their collective amble posing an unsavoury contrast to the bodies once confined here. The connotation is that grief has been repressed or is altogether absent, the free bodies hemmed in by social etiquette but not too hard put-upon by the gravity of the place. It’s hard to tell if this is the look of an aggregate vigil, several generations removed, or that of an amnesiac drift.

In this regard it may be instructive to look toward the enigma put forth by Maurice Blanchot’s The Writing of the Disaster, in which he questions: “How can thought be made the keeper of the Holocaust where all was lost, including guardian thought?” Austerlitz, or rather its chosen demographic, dwells in the realm of “guardian thought,” in the rational attempt to make meaning where the making of meaning is impossible. As evolutionary cultural responses to the Holocaust have moved through realism, modernism, and now something postmodern (consider Spielberg and Spiegelman), the demands for authentic representation have wavered into a different register of contemplation, in which tragedy and its attendant grief may find new means of expression, but so too may be easily subsumed into lifestyle. If we can never fully recover from the trauma of the Holocaust, there must be something morally at stake in the means with which we attempt to restore dignity and agency to the memory of the perished and dispossessed. Loznitsa is caught up in this historical and ethical intersection, at once occupying a position he deems untenable but digging in his heels all the same, to cast a glance at whatever these tourists have come to look at, or look for. Have we overcome the impossible, the film’s steady but persistent gaze seems to ask, or has the grass grown over the graves enough to allow sufficient traction for guided tours to amble through the most catastrophic annals of history? “Follow me,” waves on one tour guide, leading his charges to the “darkest part of our tour, because this was the extermination facility…”

Loznitsa’s impassive and protracted shots read as a determined act of incredulity in the face of such claims to narrate history, to attempt to inhabit the contours of the horrific, to speak on behalf of the voiceless. At the very least, the film’s contrapuntal stance serves notice of the site’s amenability for poor judgment, as one chaperone can be heard trying to hasten the end of a lunch break with the regrettable words, “Don’t worry, this isn’t the last time you’re going to be able to eat.” Lesser directors might have taken the opportunity to point up the shame of such breaches of etiquette, thereby occupying a slippery moral high ground, but here the detail passes incidentally, with the director presumably just another anonymous face in the crowd. Again, there is the implicit irony of Loznitsa being simply another man with a camera, his own project evidently symptomatic of what he’s documenting; indeed, one could reverse the source of wariness and redirect it toward him, to inquire how it is possible to make a film in a place like this. For all the randomness of the passing crowds, there is nothing random about Loznitsa’s compositions, with shots often riding out the visual ambiguity of once-harmful architecture, the interplay of sentience and matter reinforcing their mutual exclusion, the stillness of the camera tethered to the dormant threat of harm’s instrumentation. The shot of an empty tiled table is overwhelmingly loaded with the conjecture of pain, and as such is difficult to countenance, though the fleeting manner in which crowds shuffle by suggests that perhaps time has made the encounter more…bearable?

The film’s visual and spatial incongruities impose tacit condemnation—a kind of guilt-by-participation determination—but, more plaintively, the contrasts allow for a sustained contemplation of the elegiac, of memorialization. The sense gleaned from the sombre, extended takes is of a candid inquiry into the nature of mourning; how, if it all, does it work, and what does that look like? Is there something intrinsically moral in our capacity to bear witness? Loznitsa’s project in effect mourns the mourners, lamenting the collective loitering-with-intent that, while ensuring that the gravest of atrocities shall never be forgotten, conversely reconfigures how it will be remembered.

Still, is there succour to be found here? Loznitsa, having run the risk of condescension toward his subjects, leaves it late to reveal a face that bears an expression contrary to the prevailing look of dutiful interest. Or perhaps this is the effect of bringing his camera, and therefore his attention, into a more intimate perspective? The result, in any case, is a look of recognizable concern, which runs counter to any shaming tone, as well as to the vociferous claims made by tour guides that seem embellished through a dynamic, foleyed sound design. Regardless of intent or angle, what both director and visitor share is a spectral and speculative sense: for all the looking at, for, into, and upon, there is no definitive thing to see, no true essence to reveal, no core horror to witness. Night and fog—the haunting of vernebelt, of those who were reduced to mist and ash—persists in spite of the broad daylight and sun parasols. Loznitsa’s project in a sense echoes Primo Levi’s who, in his memoir of Auschwitz, intended not “to formulate new accusations…rather, to furnish documentation for a quiet study of certain aspects of the human mind.” Just what these certain aspects are, in Austerlitz’s disquieting view, remains tantalizingly left to the viewer, themselves further removed still from the ruins, from the spectacle of past suffering whose gates are welcomingly flung open. A baby is gently rocked in its pram at the camp’s entrance, beneath the ornate and ominous Arbeit macht frei sign, and one is left to wonder what future generations will make of their parents’ snapshots inside such solemn museums, and of their own place in the story. It’s a narrative we may not fully recognize in the further museology of suffering, but its origins nevertheless remain the source of our modern morality.