By Blake Williams In CS54, Currency, From The Magazine 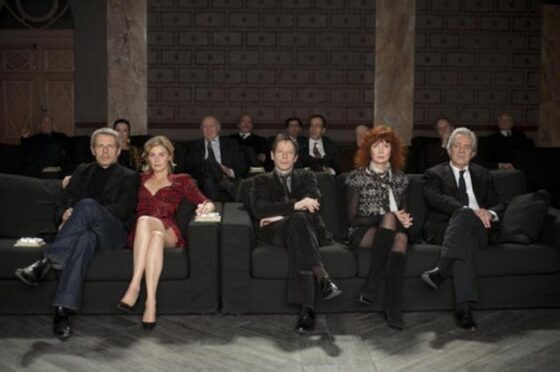 That Alain Resnais would endow his follow-up to his neurologically scrambled masterpiece Les herbes folles (2009) with the title You Ain’t Seen Nothin’ Yet seems like a goad to premature eulogists. As Resnais would be turning 90 a fortnight after the film’s Cannes premiere last year, many journalists in attendance presumptuously deemed it to be the final entry in his storied seven-decade career, conveniently ignoring the fact that Resnais was in the development stages of another adaptation of an Alan Ayckbourn play (following the 1993 Smoking/No Smoking and the 2006 Coeurs). With Resnais now paired with Manoel de Oliveira on the notional shortlist of active filmmakers working in extremis—and after a Huppert-led jury perversely denied him a gilded branch in 2009 in favor of a makeshift lifetime achievement award—there was a wholly unwarranted air of the posthumous about You Ain’t Seen Nothin’ Yet, which is as eccentric and alive as its immediate predecessor.

Mortality, however, is very much on the film’s mind. During a four-minute overture, the cast of Resnais veterans (Lambert Wilson, Anne Consigny, Sabine Azéma, Pierre Arditi, Mathieu Amalric, et al.) as well as a couple of newcomers (Hippolyte Girardot and Michel Robin), all playing themselves, are leisurely introduced in voiceover as they are each notified that their former director and close friend Antoine d’Anthac (Denis Podalydès) has died, and are invited by his faithful butler (Andrzej Seweryn) to gather for the obsequies at the departed’s Pantheonic mansion in Peillon. There, after the assembled throng is seated in front of the world’s most ostentatious HDTV wall-mount, the Butler (in the Study, with the Remote Control) presents a video in which their late friend asks them to watch a videotaped rehearsal for his new production of Jean Anouilh’s Eurydice. As he had previously cast all of the gathered mourners in various productions of the piece, he declares that it is up to them to decide whether or not this final testament is worthy enough to be allowed a public performance.

From this point on, the majority of the film is devoted to a reverent recitation of Anouilh’s ’30s-set updating of the Orphic myth, featuring an ironical and promiscuous Eurydice as a member of a travelling acting troupe and a rebellious Orpheus who, though still possessed of his musical gifts, is quite far distant from his mythological forebear’s fauna-charming divinity. But the first 15 minutes of You Ain’t Seen Nothin’ Yet are themselves derived from Anouilh’s 1969 Dear Antoine, or The Love That Failed, written nearly three decades after Eurydice, the later work here serving as a proscenium for the earlier. Resnais thus embeds the theme of senescence within the textual matter of the film itself—Anouilh wrote Eurydice at 31, youth receding; Dear Antoine at 59, dotage approaching—and in that intertextual contrast offers a sly mirror image of his own metatextual method. Dear Antoine marks a period when Anouilh had largely abandoned the revisionist classicism of his earlier modernizations of Greek mythology such as Médée, Antigone, and, of course, Eurydice, in favour of experiments with alter-ego protagonists, meta-structures, and coups de théâtre. While Anouilh’s formal tinkering is ultimately subsidiary to his plays’ larger concerns, it’s hardly difficult to perceive what initially drew Resnais to these works, or the productively dynamic tension—both formal and temporal—he divined in their juxtaposition.

Just as Resnais has the elder Anouilh answering to the younger—and apropos for a film that is very much attuned to the melancholic inevitability of generational torch-passing—so he himself hands part of his film over to a more youthful partner: French filmmaker Bruno Podalydès (brother of Denis, and whose Adieu Berthe also played on the Croisette last year), who directed the production of Eurydice that Resnais’ actors watch on the monitor. Given carte blanche by Resnais in his casting and staging of this effectively autonomous production, Podalydès (who also shot the scrappy late-night television program that appears in Coeurs) created a full-length adaptation of Eurydice that can most readily be situated within the aesthetics of avant-garde theatre, a mode decidedly unlike either Resnais’ or Podalydès’ prior work. Set in a large abandoned warehouse, with empty oil barrels comprising the majority of the props, Podalydès’ Eurydice features actors pantomiming performances on musical instruments that we hear but don’t see, and a gigantic pendulum perpetually swinging through the space like a wrecking ball. We see only brief segments of Podalydès’ effort, however, as Resnais’ baker’s dozen soon begin to reprise their respective roles from Eurydice, reciting their lines in sync with the actors in the video—the ghosts of performances past, as per the intertitles that Resnais swipes from Nosferatu (1922), coming forth to present themselves.

As Jonathan Rosenbaum once posited, Resnais’ films bear a likeness to sculpture in their “shapeliness” and “powerful multiplicity of meanings”; in You Ain’t Seen Nothin’ Yet, by contrast, Resnais reshapes Anouilh’s linear narrative into an epically Cubist structure, no additional vantage points necessary. As Resnais’ players who can recall their past lives break into their dialogue as if by reflex memory, they create a new, parallel dramatic plane to that on the television, sharing its time and space but evincing its own, entirely distinct aesthetic vocabulary. This isn’t only a matter of the contrasting production formats, Podalydès’ Eurydice shot in HD video while Resnais opts for celluloid (“I have an aversion to digital”): as the actors are summarily possessed by their former roles, the screening room becomes a spotlit stage, doors open onto railway platforms, and walls and floors glide inharmoniously around them courtesy of the most intentionally abject application of greenscreen this side of Cosmopolis (2012).

Yet despite the predictably loquacious proceedings, and for all of Resnais and Anouilh’s preoccupations with the incorporeal nature of consciousness and the passing of time, You Ain’t Seen Nothin’ Yet sees Resnais closely attuned to his players’ physicality. Within the magical, hyper-dimensional space he’s conjured, he orchestrates his actors’ movements in a manner akin to contemporary dance: the particularly expressive Azéma/Eurydice and Arditi/Orpheus heave themselves onto furniture, each other, and through wavering artificial spaces, then dejectedly drag, cradle, and discard one another in expressively heightened and operatic gestures, as if language has become wholly inadequate and bodily contact is the only means by which to express the earnestness of their emotions. To see actors of such wide-ranging generations embody characters written to be wistful, naïve, and immature—that is, young—is uncanny and affecting. “Our story is beginning,” whispers Anouilh’s Orpheus, eternally young in all his manifold (re)incarnations even when he speaks his ardour through raspy voices and wrinkled bodies, Resnais’ beautifully aged instruments gracefully, sublimely prolonging the radiance of callow romance.

Erratum: the two Ayckbourn adaptations made by Resnais were Smoking/No Smoking and Coeurs, not On connait la chanson and Pas sur la bouche as stated in the print version of this article. The errors have been corrected above.