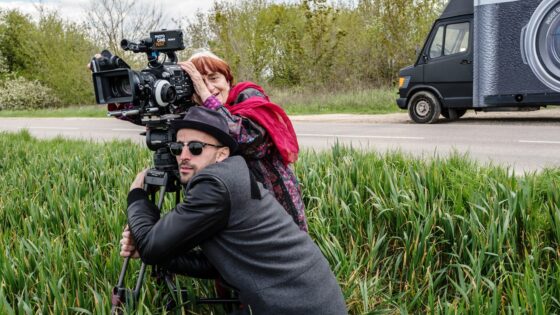 The Normandy village of Pirou-Plage almost became a holiday destination. In 1990, property developer Pier Invest launched a plan to build a hotel, two tennis courts, and 80 vacation homes. The initiative would transform the built environment and economy of this seaside area of 1,500 inhabitants—but not as anticipated or desired. Within a few years, Pier Invest had declared bankruptcy, leaving devastated local businesses and the shells of some 30 incomplete structures in its wake. French newspaper Le Monde called the site a “village fantôme”; it was a stillborn community that never lived.

Pirou-Plage is one of the rural locations that Agnès Varda and her collaborator, thirtysomething street artist JR, visit in their whimsical travelogue Visages villages. A drone shot offers an aerial view of its decrepit, graffiti-clad houses before the odd couple turns up in JR’s photo truck, a Mercedes kitted out to print large-format images that are flypasted onto buildings. They hold an afternoon party, gathering locals with the hope of “bringing some life” to this land blighted by greed, “even if it’s only for a day.” To the sounds of plucked guitar strings, families glue their portraits to the ruins, making pretty the ugliness.

Visages villages consists of a series of similar episodes, filmed all across the French countryside. Fish are pasted onto a water tower; wives are pasted onto shipping containers. The tone is playful and light, sliding at times into an embarrassing cutesiness, complete with occasional rhyming dialogue, animated credit sequences, and a running joke about JR’s refusal to remove his sunglasses. Varda is charming as ever, but the passing years seem to have upped her taste for the saccharine—something that perfectly suits the sensibility of the internationally renowned street artist. He has called himself “un artiste engageant, pas engagé”: he aims to engage people but is not engaged in the political sense, valuing entertainment and participation over commitment and analysis.

Perhaps this is why it is so grating that many of these little art projects occur in locations that are, like Pirou-Plage, marked by the exploitation, economic hardship, and creeping precariousness characteristic of many working-class communities in the 21st century. Like the worst social-practice art—the innumerable critiques of which seem not to have reached Varda and JR—these ameliorative excursions seek to inject creativity and happiness into the lives of those less fortunate. There is the woman who is the last inhabitant of a row of soon-to-be-demolished houses in a northern mining town; there are the dockworkers of the port at Le Havre and the employees of a hydrochloric acid factory. This feel-good film conceives of social relations as somehow devoid of antagonism and unpleasantness: it never mentions deindustrialization, outsourcing, immigration, the decline of organized labour, or the rise of the National Front. It keeps quiet on the many nationwide strikes in protest of unfavourable pension reforms that have recently occurred in French ports, including Le Havre, just as it omits any reference to the long-lasting economic damage incurred locally in the aftermath of the Pirou-Plage scandal.

Superficiality and light-heartedness are not always defects in a film, but they are vexing here, given that so much is clamouring for visibility at the edges of the frame. The goats are cute, horns or no horns, but how can Visages villages succeed in celebrating everyday people if it purposefully blinds itself to the more difficult dimensions of their lives? The film compounds the problems already present in JR’s questionable practice, yoking a fantasy of conviviality to a deeply nostalgic image of the rural working class. The faces of these places are blindingly white, blessed with good jobs, happy marriages, secure retirements, and even a helpful postman. In their efforts to honour these small-towners, our cosmopolitan filmmaker-tourists see only what warms the heart.

Varda is no stranger to optimism and quirky fun, yet this is something of a departure for her. Films such as Les glaneurs et la glaneuse (2000), her road-trip essay on salvage and reuse, and Mur murs (1980), her portrait of Los Angeles street murals, share themes with Visages villages and are cited within it. In these earlier works, Varda proceeds with a generous eye to inequality and diversity, recognizing the complexity of social life and the pervasiveness of injustice: she weaves her wacky musings together with a sense of solidarity and even anger. Here, something rather different occurs: like JR’s interventions into public space, Visages villages stays on the surface, offering an amusing and enjoyable illusion that covers over less palatable realities that lie beneath; it obscures where it should illuminate. Does JR wear dark sunglasses to hide a knowing glint in his eye that would give away the falseness of this picture? Pirou-Plage is the only literal ghost town that Varda and JR visit, but the airbrushed image of village life that accumulates across Visages villages has something spooky about it. This documentary is a fiction.

Struggle and sadness are admitted into Visages villages as long as they are confined to the domain of personal history, privatized in good neoliberal fashion. With the exception of a quick visit to his 100-year-old grandmother, most details about JR’s life remain a mystery. Varda, by contrast, continues the autobiographical thread most recently familiar from Les plages d’Agnès (2008), enjoying a complexity accorded to none of the film’s other subjects. She remains clearly fascinated by life but is welcoming of death. Her established meditations on aging and loss extend here to vision problems, fatigue, and difficulties climbing the stairs—all of which are thrown into relief by the relative youth of her collaborator, with whom, it must be said, she shares a tender and sincere affection. In a reprise of Jean-Luc Godard’s Bande à part (1964), the pair race through the Louvre, JR pushing Varda in a wheelchair. What was once a paean to the brazenness of youth is replayed as a moment of cross-generational camaraderie.

Godard’s presence in Visages villages is not limited to this romp. Of Varda’s journeys into past films and friendships, most significant is the concluding pilgrimage to the filmmaker’s home in Rolle, Switzerland. Why do they go? In his tinted glasses and insufferable hat, JR does look something like the young Godard who appears in the film-within-a-film of Cléo de 5 à 7 (1962). JR perhaps serves as an aide-mémoire that prompts Varda to reconnect with her estranged friend. But this, too, is merely cosmetic: JR’s gregarious shtick couldn’t be farther from Godard’s misanthropic seclusion and cryptic conceptualism. The thought that the duo might plaster JLG’s surly mug on the façade of his house is truly hilarious, but they leave the photo truck at home and travel to Switzerland by train. Whatever the motivation for the visit, Varda’s moving response to Godard’s failure to welcome them is enough to make the film worth watching. It is the one moment when Varda punctures the film’s otherwise pat image of social harmony and allows some ugly feelings to creep in. Far from the blithe cheerfulness of those many faces plastered on buildings, frozen into banal spectacles of cheap public art, Varda’s countenance—wrinkled, fleshy, embodied—shatters cliché. In her candid and conflicted reckoning with the unfriendliness of a friend, love, anger, compassion, and pain exist together.

That said, I don’t blame Godard for leaving only a private riddle written on the window in grease pen: if JR knocked on my door, I wouldn’t answer either.