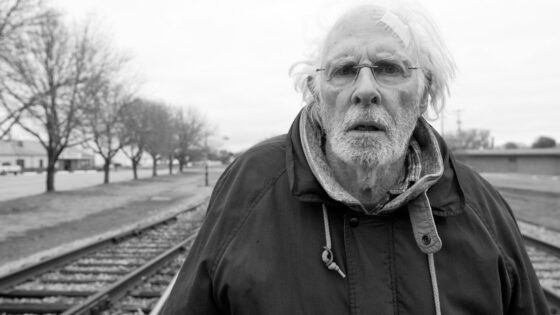 Alexander Payne’s Nebraska is a mechanical movie, and the machine it resembles is a duck press—an old-fashioned device, but darned if it doesn’t squeeze something out in the end. Such moist entreaties have been the director’s stock-in-trade since the smiling-through-tears conclusion of About Schmidt (2004), a road movie that cast Jack Nicholson as an uneasy rider 35 years after he hooked up with Captain America and Billy. With Nebraska, Payne hitches his wagon to another (r)aging bull, Bruce Dern, who was always born to be wild: recall that before Dennis Hopper and Peter Fonda concluded they’d blown it, they’d driven down the road together with Dern in tow in Roger Corman’s LSD extravaganza The Trip (1967), which was written by Nicholson.

The Easy Rider gang would chug its way towards manifest destiny, but Dern got lost along the way: a few sterling turns in the glory days of the New Hollywood (They Shoot Horses, Don’t They? [1969], Smile [1975]), one lonely Oscar nomination for his PTSD Vietnam veteran in Hal Ashby’s Coming Home (1978), and subsequently a truly eccentric list of credits (the 1981 Tattoo, in which Dern plays a mentally ill body artist, is a bizarre harbinger of the erotic-thriller cycle to come). The ’80s weren’t a great time for actors of Dern’s cohort, but at least his ex-co-star Hopper and his ex-wife Diane Ladd each got their shots at redemption courtesy of David Lynch, who was dusting off ex-celeb curiosities while Quentin Tarantino was still slinging VHS tapes. Dern, though, remained marginalized, save for the efforts of one clever young patron: Joe Dante, who cast him in The ’burbs (1989) when seemingly nobody else would, and later invited him back for Small Soldiers (1998) and The Hole (2009).

Alexander Payne is also a clever director, and he makes a point of kidding his star’s marginal status. Coerced into a touristic time-out during a Quixotic inter-state quest, Dern’s septuagenarian veteran Woody Grant frowns disinterestedly at Mount Rushmore: “It doesn’t even look like it’s finished.” The old man’s nonplussed reaction to this literally monumental bit of national portraiture could be a gesture of disillusionment in the country that produced it, but there’s also a tangible sense of the performer’s irritation as well. If you were to swap out American presidents for American movie stars, chances are that Nicholson would find his Cheshire grin inscribed in stone, as would Robert Redford, who’s enjoying his own Hollywood Senior moment this season with All Is Lost; Dern, on the other hand, wouldn’t even make it onto the waiting list.

It would be wrong to characterize Dern’s work in Nebraska as monumental; a lifelong alcoholic who now appears stooped and stuporous beneath a tousled mess of stringy white hair, his Woody is more like the man who’s barely there. It’s a running joke in Bob Jones’ screenplay that the other people in Woody’s life—his long-suffering wife Kate (June Squibb) and his adult sons David (Will Forte) and Robby (Bob Odenkirk)—talk about him rather than to him, even when he’s sitting right beside them. The topic of conversation is invariably how to make the old man less of a burden to his loved ones, a mixture of protectiveness and resentment that figures into David’s decision to drive his father from Billings, Montana to Lincoln, Nebraska to collect an obviously bogus million-dollar magazine sweepstakes prize. It’s a seemingly harmless, gas-guzzling bit of indulgence that also doubles as an opportunity to get in some quality time before the final buzzer.

The decision to use Forte—a sketch comic recently seen dangling a rib of celery out of his butt in MacGruber (2010) and soaping down Kevin James’ car with his bare chest in Grown-Ups 2 (2012)—in an essentially serious straight-man role is a calculated gambit. The heavyweight-vs.-cruiserweight dynamic of the casting primes us for an unfair fight, but Forte more than holds up his end as it gradually becomes clear that Nebraska is as much a movie about a son coming to terms with his father’s flaws as it is a tribute to the older man’s durability. There’s a sense in which David is an audience surrogate here: he knows immediately that his father’s sudden fortune is a payload of fool’s gold, and that taking him to collect it is an entirely symbolic gesture. But even as we increasingly come to see Woody through his son’s eyes, with his obvious flaws (his drinking problem, his orneriness) perceptually reconfigured as more empathetic failings—he drinks to cope with childhood tragedy and the horrors of his military service, his stinginess with affection belies his generosity with money—we also never quite break away from the director’s gaze, which emerges, as usual, from skeptically narrowed eyes.

It’s doubtful that Payne shot Nebraska in black and white as commentary on his own propensity to divide his characterizations between two distinct categories: sympathetic naïf and bullying asshole. But the fact is that there are more shades of grey in the slightly jaundiced digital cinematography by Phedon Papamichael than the majority of the supporting characters here. Woody and David are a complicated pair whose interactions are alternately relatably cozy and discordant, but when they arrive in the former’s hometown of Hawthorne for an impromptu extended family reunion, it’s as if the signal was given to the casting department send in the yokels. After Woody lets it slip that he’s an instant millionaire, everyone in town, from his predatory ex-business partner Ed (Stacy Keach) to David’s no-account cousins ( Tim Driscoll and Devin Ratray, looking like twin parade-float doppelgangers for Danny McBride) start making noises about taking their fair share. The locals’ sudden interest in Woody’s fortunes implies not only avariciousness but also a virulent strain of gullibility: possibly the movie-mad Payne sees Nebraska as a Midwestern gloss on Greed. But in these scenes, it comes off more as an extended remix of the gruelling bit in Million Dollar Baby (2004) where Clint Eastwood bravely glared down the covetous hillbilly clan horning in on his protégé’s winnings.

A more direct reference point might be Preston Sturges’ Hail the Conquering Hero (1944), another film about a returning soldier named Woody whose homecoming becomes the talk of the town. Payne has been compared to Sturges before, especially for his earlier, fleeter films like Citizen Ruth (1996), which nodded to The Miracle at Morgan’s Creek (1944), and Election (1999), an underage The Great McGuinty (1940). The comparison to Sturges cuts both ways, at once creating a laudable context for Payne’s tendencies towards broad regional caricature and setting the bar for comic invention and narrative convolution far higher than any American comedy director could reasonably hope to stretch. Joel and Ethan Coen have distinguished themselves as the finest inheritors of Sturges’ screwball legacy because they honour his velocity while sidelining his residual humanism; their sublimely caustic films speed along via series of hair-trigger comic mechanisms. Payne’s films since Election are more like jalopies: they’re built to get from point A to point B in their own good time, ticking off grace notes like rest stops along the way. Nebraska is his most magisterially paced movie yet, culminating in a slow ride down a literal Main Street, U.S.A. that’s a wonderful package of narrative and dramatic compression. It’s also as fixed in its meaning and as crowd-pleasing as a Disneyland ride, and no less gently platitudinous: It’s a Small World, After All.

Most of what’s good in Nebraska is also fairly obvious. Any praise it has received specifically for its subtlety has more to do with how skillfully Payne and his collaborators have applied a patina of subtlety—a good paint job—to the proceedings rather than any truly multifarious artistry. That’s not a knock, by the way: The Descendants (2011) was obvious too, written with a sledgehammer gracelessness, relentlessly hitting the nail on the head while missing the mark (and hey, guess what, it won an Academy Award for its script). The theme of Nebraska—that our parents were people before taking their places as all-powerful archetypes—is deep and resonant even if the homespun melodies laid over top of it are often tinny and thin. That the moment when Woody admits that he only went chasing after a jackpot so that he’d have something, anything, to leave to his kids after a lifetime spent steadily losing everything he worked for feels so methodically blueprinted does little to diminish its genuine melancholy. Reader, I cried.