Angelo Muredda/CS73, Currency, From The Magazine 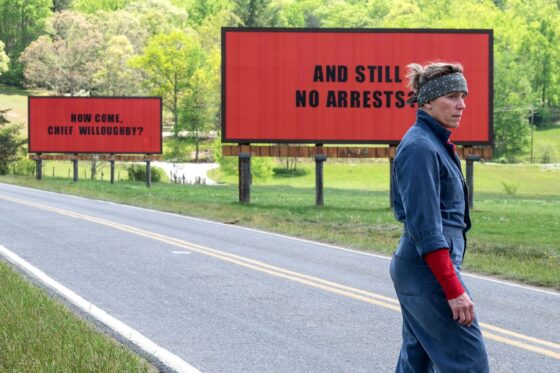 There’s a moment early in Martin McDonagh’s Three Billboards Outside Ebbing, Missouri that neatly encapsulates the playwright-turned-filmmaker’s competing instincts toward moral sophistication and childish self-indulgence. As the bereaved protagonist Mildred Hayes (Frances McDormand) struts through the local sign shop—the first step in her campaign to use the title’s eponymous placards to shame the local police department into finding the man who raped and murdered her daughter—the baby-faced proprietor Red (Caleb Landry Jones) hurriedly stashes away his copy of Flannery O’Connor’s A Good Man Is Hard to Find. Soon they’re discussing what Mildred can and can’t put on the billboards, finally agreeing that she’s fine so long as she steers away from defamatory statements and words like “fuck, piss, or cunt”—a list to which Red can’t restrain himself from adding “anus.”

It’s tough to know where to draw the line between Red’s seemingly compulsive outburst and McDonagh’s own irrepressible tendency toward the juvenile, however much he might aspire to O’Connor’s clear-eyed vision and philosophical nuance. Though he remains as interested in character as he is in wry turns of phrase and inventive swearing, McDonagh still struggles in his third feature (following In Bruges [2008] and Seven Psychopaths [2012]) with basic matters of taste, indiscriminately scrawling his signature comic naughtiness over material that warrants a lighter hand and, perhaps, a more self-effacing presence behind the camera.

With the exception of the overstuffed, misanthropic farce of Seven Psychopaths, McDonagh has typically been drawn to character portraits of salty men whose bad behaviour falls short of their best selves, and Three Billboards is no different in this regard, despite the fact that it is initially anchored to McDormand’s single-minded avenger. Despite the tonal change from North Dakotan politeness to Missouri bluntness, McDormand is clearly revisiting aspects of Fargo’s (1996) Marge Gunderson here, though where Marge was quietly horrified by the lengths to which people will go for a “a little bit of money,” McDormand’s Mildred—with her steely eyes, starched-collar denim shirts, and slicked-back high fade haircut—has the look of someone who knows the world’s ugliness all too well, and confronts it with a primal ferocity. Determined to refocus Ebbing’s eyes on her daughter’s brutal murder—a cold case that, seven months later, is already a distant memory for the townspeople to sigh fatalistically about—Mildred runs up against dying Ebbing police chief Bill Willoughby (imbued with an air of rumpled amiability by Woody Harrelson), and his wayward protégé Dixon (Sam Rockwell), a reflexively racist, none-too-bright local whose quickness to anger suppresses his decency as well as dulling what little detecting abilities he might possess.

While McDormand makes the most of such grandstanding, awards-clip-friendly scenes as Mildred archly roasting a priest on the ethics of being part of a “gang” like the Catholic Church, given its history of child abuse, she also makes more of Mildred than the tough-broad archetype the script occasionally suggests. Her facility at sliding seamlessly in and out of different registers gives real texture and warmth to quieter character beats, such as Mildred’s implicit hurt at her son’s clandestine visits with her abusive ex-husband Charlie (John Hawkes) or a scene where she cradles the physically frail Willoughby, in whose custody she finds herself after a violent run-in with a hostile dentist who doesn’t much care for peaceful protests against the local police.

Insofar as a moral drama like this one depends on characters’ movement from one ethical pole to another, though, the film’s sympathies (and interests) ultimately lie less with Mildred than with its two white male leads, who find themselves nudged from indifference and hostility to something like accountability. This shift in focus is both a boon and a disadvantage to McDonagh’s film. On the one hand, Harrelson’s relaxed, comically loquacious voiceover after a sudden mid-film departure opens up a narrative that, on paper, would seem to have an annoyingly overdetermined trajectory, while Rockwell’s vanity-free performance as Dixon—a stunted child who has aged into his forties without having to become much of a person along the way—gives credence to what would otherwise be an unlikely transformation from vile cop to budding gumshoe with a conscience. On the other hand, McDonagh’s interest in deep-down-decent Everymen like Willoughby and Dixon comes at the expense of flat supporting players like Denise (Amanda Warren) and Jerome (Darrell Britt-Gibson), working-class black characters who are inelegantly employed as props for the leads’ moral and emotional development, their rotely sketched benevolence and suffering setting off the more interesting crises of their white friends.

Where McDonagh really struggles, however, is in marrying his typically rich characterizations (of those characters he actually cares about) and morally freighted scenario in a narrative construct that still leaves room for his usual litany of fucks, pisses, and cunts. A generous way to read the film’s mix of righteousness and profanity would be to claim that McDonagh is aiming for Rabelaisian bawdiness here—that his insistence on pulling moments of gentleness out of otherwise grotesque characters who relentlessly badger and belittle their fellow man and woman is the product of his deep-seated humanism. But while McDonagh’s seriousness as a dramaturge does merit some generosity, it could well also be a waste of time to try to square the film’s sincere interest in Mildred’s quest for justice with its inability to resist a scene where a minor character expounds on how a package has just been delivered by a “fat little Mexican boy on a bicycle.”

The punch line here—as in the interminable moments where Charlie and Dixon make dwarf jokes about James (Peter Dinklage), a discount Romeo with a crush on Mildred—is either that the speakers are obviously bad people, or that there is something inherently funny in the words “fat,” “Mexican,” and “midget.” (James’ eventual status as an object of pity—not for his stature, but for his unrequited romantic yearnings—is arguably phonier than the showboating verbal abuse McDonagh heaps on him initially.)  McDonagh’s point may well be that nastiness and decency are the two coin faces of the human condition—that good, card-carrying humanists ought not turn up their noses at chronic edgelords and abusers like Dixon, lest the latter be discouraged from realizing their potential and doing the right thing in their hour of courage. But whatever the rationale behind it, the flippancy of McDonagh’s compulsive jokes frequently halts the momentum of a film that—following the lead of Mildred’s billboards, which demand that viewers bear witness—is about how flippancy is an inadequate response to the horrors of the world.

Posted in CS73, Currency, From The Magazine