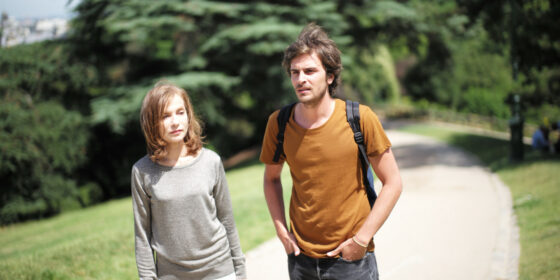 A decade after her youthful debut Tout est pardonné (2007), the now-35-year-old Mia Hansen-Løve has become a veteran. But she’s always been an old soul. Her films are rife with scenes of teenagers being forced to confront hypocrisy and loss well ahead of schedule, and she’s very good at capturing the split-seconds where cleanly diagrammed idealism either comes up short or melts away into the rear-view mirror—partings of such sweet sorrow. The title of Un amour de jeunesse (2011) thus resonates as a kind of artistic mission statement, although it gets refined and reframed in L’avenir, which has a very different—and more distanced—relationship to nostalgia. In her fifth feature, Hansen-Løve obliges herself for the first time to gaze forward even as her sexagenarian main character is compelled to look back, in anger and acceptance, at what has already come and gone.

Essentially a one-woman show, L’avenir stars Isabelle Huppert as Nathalie, a formidably brilliant professor of philosophy whose long-standing desire to have her charges think for themselves rather than recite rhetoric by rote has won her a passionate campus following. Splayed out on the grass at the park with a semi-clandestine study group (the film is set in 2010, during the pension reform strikes that affected universities across France), she looks more like a member of the undergraduate tribe than their high priestess. Beginning with an unexpected estrangement from her philandering husband (André Marcon), circumstances nudge Nathalie further into the orbit of the younger generation, embodied by an attractive former student (Roman Kolinka) whose anarchist collective respectfully welcomes her into the fold. She fits in, but only to a point, and there’s the rub. Where Eden (2014) was a slightly unnerving fable of youthful stasis about a DJ who seemingly refused to age—the Mixtape of Dorian Gray—this mostly superior follow-up contemplates the ache that comes with moving inexorably forward. Compare the films’ two opening shots: Eden’s spookily beautiful harboured submarine has been replaced by a boat motoring toward the horizon line, seen through glass, dimly.

As Hansen-Løve’s first truly grown-up protagonist, Nathalie offers a very different identification point than her winsome adolescent antecedents. (The character is reportedly based on the filmmaker’s own mother, a teacher who separated from her husband later in life.) Huppert, of course, gives Nathalie the lived-in, multi-dimensional credibility that has marked all of her recent performances. (Since 2009, she’s acted for Michael Haneke, Wes Anderson, Claire Denis, Brillante Mendoza, Hong Sangsoo, Marco Bellocchio, Serge Bozon, and Paul Verhoeven, among others, as well as playing Catherine Breillat’s surrogate in an auto-biopic; is there another actor alive with such auteur cachet?) The script and the acting are nicely complementary of one another throughout; Hansen-Løve’s selection of an academic milieu serves and is served by her star’s credibly intellectual comportment. In a movie where pretty much everybody onscreen has not only read Adorno, Horkheimer, and Levinas but also possesses dog-eared first editions filled with underlined passages of text, Huppert finds a way inside the talking points, as if animated by philosophy’s inherent excitement.

The waning of hardline radical values is a running motif here, as Nathalie ruefully recalls a pre-marital sojourn in Russia (“I was disenchanted by the end”) and is preoccupied more generally by the problem of adaptability, i.e., if it’s synonymous with compromise. The tenured professor’s commitment to curriculum is challenged early on, when the unctuous new marketing managers hired by her publisher present her with a style guide describing possible glossy layouts for a new philosophy textbook—one of several methodically worked subplots meant to give the slender narrative some meaty conceptual texture. “Don’t misinterpret,” Nathalie warns her students after assigning a challenging passage by Rousseau, and these marching orders could also be directed at the audience, even if they might need them a little less than anticipated.

It may be that the difference between a metaphor that feels magical and spontaneous and one that betrays its craftsmanship is simply a matter of style, and Hansen-Løve, for all her gifts, doesn’t quite have the sleight-of-hand to bring off, say, the symbolic black cat named Pandora that Nathalie inherits from her mother (Edith Scob) halfway through the movie, a possible homage to the mythologically monikered kitty in Inside Llewyn Davis (2013). But she can also conjure up moments of real, insinuating potency, as in a beautifully conceived (and acted) scene where Nathalie is compelled to describe the events of her mother’s life and realizes she’s simultaneously narrating her own story as a mixture of prophecy and cautionary tale, or a pan across a muddy beach in Brittany whose grayed-out expanse takes on a lunar aspect as a backdrop to a passage of intense alienation.

The question of whether true subtleties are so readily perceived surely applies, and, in a way, Hansen-Løve’s sincere determination to make meaning is the real subject of the film, which not only contains several exchanges about the irreconcilability of spiritual and secular values but permits its characters to freely debate about the true nature of reality (in Eden, the biggest and most significant argument within the EDM community was over the merits of Showgirls). Rather than trying to draw a line (or thread a skewer) between the apparent pretentiousness of the people onscreen and the filmmaker behind the camera, it might be better to see them as existing along a similar continuum, which allows at least for the possibility that some of the script’s many, many reading-list references comprise a form of highbrow satire. And if they’re not meant satirically, then give Hansen-Løve credit for taking Nathalie’s métier seriously, and trying to nurture a tradition of explicit philosophical discourse in modern French cinema derived from Rohmer and Eustache.

At 97 minutes, L’avenir is both more succinct and shapely than the jumbo-sized Eden, which had a droning, run-on quality appropriate to its selected musical subculture. The soundtrack selections in this comparatively quiet and reflective movie here are more judicious, and several of the needle drops draw blood, including Woody Guthrie’s working-class heroic “My Daddy”—the perfect car-seat sing-along for prosperous lefties off on a jaunt to the country—and Donovan’s “Deep Peace,” which washes over the soundtrack at a moment when its eponymous invocation feels especially unlikely for Nathalie. Hansen-Løve even gets mileage out of “Unchained Melody,” reclaiming it from its post-Ghost cliché via a lovely cover by forgotten doo-woppers The Fleetwoods, which frames a final moment of graceful repose. It may be that Hansen-Løve is too softhearted to let her story end on a truly discordant note, but there’s a genuine complexity to the final image that belies its sweetness. Nathalie’s embrace of old roles in the face of a destabilized life is cathartic, but it’s also a form of surrender. And as Denis Lenoir’s camera recedes into a carefully bisected domestic composition, the boundaries between the past, the present, and the future shimmer and blur together in a way that suggests that nothing ever really slows down.