Manuela Lazic/CS74, Currency, From The Magazine 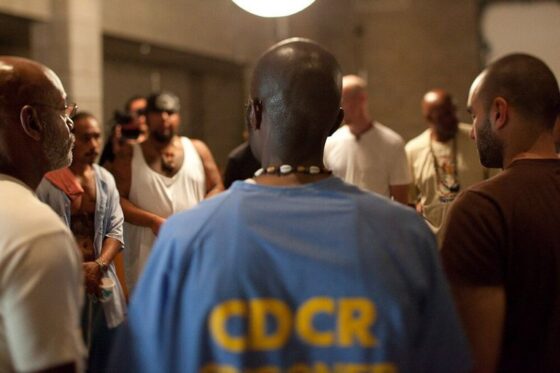 Early on in The Work, a documentary chronicling intense group therapy techniques practiced inside Folsom State Prison outside of Sacramento, California, a man suffers a violent meltdown. He is Brian, one of three outside visitors that directors Jairus McLeary and Gethin Aldous follow as they join inmates over a four-day course of treatment. His distress is not an uncommon sight under the circumstances: what is more worrisome is his doubt regarding the ultimate benefits of the punishing emotional labour on display. A guide puts his hand on Brian’s shoulder and asks him gently, “Are you willing to simply trust the process?”

McLeary and Aldous trust the process completely. It took several years for the filmmakers to obtain access to the high-security prison, even though McLeary is a one-time volunteer whose father James is the CEO of the not-for-profit psychiatric group the Inside Circle Foundation. Yet their approach doesn’t seem encumbered by these circumstances; rather, it feels both immersive and in tune with the volatile nature of their subject. The “work” of the title involves the participants focusing entirely on the present moment, locking eyes with one another to avoid retreating into themselves. In this state, they recall painful memories and reignite difficult emotions they have so far either repressed or else expressed on the outside through acts of extreme violence.

The filmmakers understand that these exchanges are intensely engrossing for those involved, which in turn allows them to capture the inmates’ most genuine behaviours unnoticed. The cameramen appear in each other’s shots, foregrounding the “work” of filmmaking and coming perilously close to the inmates, but without ever seeming to disturb their concentration. McLeary and Aldous’ evident respect for the therapeutic method, combined with their own direct-cinema rigour, makes for one of the most honest recent examples of the “fly on the wall” style of documentary filmmaking, recalling Allan King’s similar approach to group therapy in Warrendale (1965). It also serves as evidence for the effectiveness of a surprisingly soft approach to the rehabilitation of hardened criminals.

What the therapists ask of the all-male inmates and visitors alike is to forget who they are outside the prison walls. Rick, a former member of the Aryan Brotherhood now steeped in the practice, explains that participants must try to “be who [they] could be.” The filmmakers are well aware of how strange the almost whimsical language of self-help might sound when coming from a heavily tattooed middle-aged convict. Their solution to this dissonance is elegant and efficient: in lieu of a preconceived narrative arc, they turn to the volunteers from the “outside”—Charles, Chris, and the aforementioned Brian—and begin by employing them as surrogates for the equally baffled audience.

This collapsing of distance between the two groups is crucial to The Work’s impact. At the beginning of the first session, Rick instructs the visitors to each find two “guides” amongst the inmates and then talk to them. Dark Cloud, an imposing Native American, explains to his new “pupil” with a mix of calm, regret, and disbelief that he once tried to cut a man in half with an axe. Most of the inmates belonged to violent gangs. Many are serving life sentences. All, however, readily demonstrate patience and compassion when addressing their pasts. After the daunting mysteries around their identities fade, what remains are men of all races, ages, and sizes calmly sitting in small circles on simple plastic chairs.

In this intimate setting, McLeary and Aldous reveal their layered artistic intentions, which is to turn the visitors into subjects as well as surrogates. When a shaken Brian stands up to get some water, the camera captures his two chosen guides high-fiving each other: for them, watching Brian as he tries to hide his susceptibility to fear is, as one observes wryly, “like looking in a mirror.” The parallels being set up here are not just playful, but profound. As both cohorts share their painful stories, The Work reveals itself as fully humanist, examining the universal nature of emotional vulnerability, as well as the intertwined difficulty and necessity of accepting this vulnerability as being essential to a healthy existence. Kiki, a member of a Pacific Islander prison gang, describes his frustrating inability to mourn his sister’s death; he has to be reminded to keep breathing as the facilitator, staring into his eyes, tells him “She’s gone,” with the certainty and tenderness of a close friend. Kiki finally collapses, his resistance gone, held up on all sides by his companions.

What immediately follows this disclosure of pain pushes the film even deeper into its exploration of human psychology. The camera soon catches Charles, the middle-aged father from the outside, still sitting on his chair in a quiet stupor, his silence in stark contrast to the demonstratively compassionate criminals. Instead of judging his apparent non-response, the filmmakers interrogate it, and reveal the diversity of results that the “work” produces. Charles explains that his silence was involuntary: he simply didn’t expect to feel so shaken by somebody else’s emotions. “It’s fucked up if you don’t,” Rick reassures him. This blunt observation sums up the film’s power as observational cinema as well as the crux of the problem for criminals and regular citizens alike: their reluctance to let themselves experience their own complicated emotions, as well as the feelings of others.

With this in mind, it’s through the experiences of an outsider that the film makes its strongest argument regarding the need for a better understanding of the psychology behind criminal activity. From the beginning of the session, Brian maintains a distance, glibly commenting on the exciting opportunity of meeting criminals as his motivation for being there, like a morbidly fascinated Mindhunter lead without the FBI credentials. In this inherently performative space, where self-presentation is a way of bravely facing one’s demons, he shamelessly rates the inmates’ extremely personal declarations as though they were acting exercises. But when he’s confronted about his behaviour, the tables turn. Calm questions prompt a tearful rage, and he emits a terrifying scream, before saying, “It’s like the fucking devil… in my head, I think I’m a fucking prince…I feel like killing someone when I feel like this!” No longer sublimating his frustrations through passive-aggressive contempt, he kicks and screams like Kiki before him, his eyes glistening throughout his secular exorcism. The disturbing question of how Brian’s seething, unexamined pain might have otherwise been released in his daily life hovers over the room; it seems to find its answer on the grave but relieved faces of the men surrounding him.

The pre-emptive power of the work extends beyond the individual, and the film demonstrates how its reach widens exponentially with each new believer, a dynamic that gives the film a subtle political dimension. Near the end of the four days, Charles spontaneously starts crying and offering advice to Dante, an inmate who has been contemplating suicide because his girlfriend has stopped bringing their son on her visits to Folsom. Charles relates directly to Dante’s story of “fatherless sons” because he didn’t know his own father, but what’s more interesting is the impact that Charles’ new sense of openness has on Dante. Eventually, the heartbroken convict retracts his desperate words. Charles’ empathy has made him want to display a similar tenderness to his child and be present, even if behind prison bars. Through openness, emotions are reconciled and controlled, self-destructiveness is replaced by self-actualization, and compassion arises naturally, allowing one person to help another after having helped himself.

The Work closes with a title card stating that not a single man who has taken part in the program has been reincarcerated after his release. Rick’s seemingly blind trust in the process finds itself fully justified in these statistics. The daring approach of McLeary and Aldous’ filmmaking, completely immersive without trying to be invisible or to influence the chain of events, is also proven to have been a risk worth taking. “I’m alive and I’m fucking grateful,” says Rick as the last day ends. Just as the pain displayed by the participants throughout the film unsettled the men surrounding them, the gratitude that they experience by the end of the therapy also has the potential to galvanize the spectator, who may be inclined to try and spread that feeling of generosity and thankfulness. In other words, the work never ends.

Posted in CS74, Currency, From The Magazine