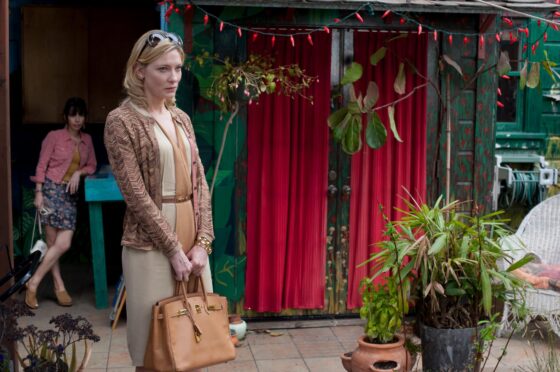 Cate Blanchett’s best film performance remains her slight but crucial supporting turn in The Talented Mr. Ripley (1998). Playing Meredith Logue, a nouveau-riche heiress who has trained herself to swoon at the opera, Blanchett gently underlines this society neophyte’s would-be sophistication. The moment when she strategically nuzzles up to her date on a nighttime carriage ride is at once utterly calculated and endearingly guileless: it’s a debutante’s best shot at being a princess. This finishing-schooled globetrotter is also a naïf, and thus utterly susceptible to a social-climbing sociopath’s hastily contrived lies.

Woody Allen basically tried remaking The Talented Mr. Ripley as Match Point (2005), which tipped its cap to Patricia Highsmith before redoing the ending of Crimes and Misdemeanors (1989). Wildly overrated by critics eager to see one of their ’70s heroes experience a septuagenarian renaissance, Match Point hasn’t aged well, or even badly; it’s entirely forgettable. But whatever the shelf life of Vicky Cristina Barcelona (2009) or Midnight in Paris (2011), shooting in Europe seems to have dislodged something long stuck in Allen’s craw: the former was a surprisingly loose and voluptuous exercise in comic irony, more slyly knowing than chidingly cruel, while the latter fairly tingled with gentle good vibes (except for those scenes with poor Rachel McAdams, who was, amazingly, treated more kindly onscreen by Brian De Palma).

Blue Jasmine, which casts Blanchett 15 years after Ripley as another self-deluding socialite involved with a pathological liar, should continue to refract the autumnal glow around its creator until it becomes blinding. It’s already made headlines for having the best first-weekend grosses of any of Allen’s films, and the reviews have been stellar, which is understandable…to a point. Much more successfully than Match Point—and I’d argue any Allen joint since Crimes and Misdemeanors—Blue Jasmine finds the director suppressing his chronic gag reflex in favor of a more stringent sensibility. For the most part, it works.

The movie opens with a startling shot of a commercial airliner in mid-flight over Middle America. The elevated perspective is a fine visual analogy for Blanchett’s Jasmine, who has spent her life hovering above the fray. Her idea of conversation is to talk about how, once upon a time, she threw “the best dinner parties in New York.” But what’s past is past, and in the wake of some sort of comingled domestic and financial calamity, she’s relocating herself. Her manifest destiny is to go west, to San Francisco, to live with her half-sister Ginger (Sally Hawkins) and her brood, a set-up with deliberate echoes of A Streetcar Named Desire.

Aside from a few re-contextualized lines of dialogue and a subtly casual moment where Jasmine asks her sister to fetch her a lemon twist with ice, Blue Jasmine goes light on overt citation á la Midnight in Paris. Instead, Allen is trying to connect with his source material’s themes, with mixed but at times real success. For all its hothouse sensuality and dexterous play with language, Tennessee Williams’ play was about the violent collision between the American gentry—embodied by Blanche DuBois, the displaced plantation matron—and the hard-driving immigrant underclass (represented by the surly, perpetually undershirted Stanley Kowalski) coming up underneath them; it’s a period piece that has proved perennial.

Blue Jasmine substitutes Fifth Avenue for Belle Reve, and the numerous flashbacks to Jasmine’s life in Manhattan have a strange and welcome frisson owing to the fact that for once, Allen isn’t taking bourgeois privilege for granted. The sequences of Jasmine and her millionaire husband Hal (Alec Baldwin) lounging by the pool are stagey in a way that suggest not poor film direction but con artists trying to live up to their glittering self-images. Their aristocratic pantomime is built on a deeper deception: Hal is a shyster moving money around between various fronts. In the most obviously allegorical twist, he cavalierly blows all of Ginger’s savings on a bad investment. Whether one finds it touching or disingenuous, it seems that Allen is striving for a sort of class critique here. What Blue Jasmine lacks in imagination about its working-class characters—gentle dupes—it makes up for in contempt for the white-collar criminals spending their money.

It’s precisely this sense of contempt that makes Blue Jasmine a little more bracing than Allen’s usual, even if it also marks a clear disconnect between Allen and his literary influence du jour. Ever a tender tormentor of his characters, Williams demonstrated compassion for Blanche without dulling his knife-edged insights into her narcissism and weakness. Allen regards Jasmine with at best wary bemusement—as when her newly minted up-by-bootstraps rhetoric dissipates at the sight of the first suitably eligible San Franciscoan she meets (Peter Sarsgaard, playing what feels like his millionth smooth-complexioned rotter in a row) —and more generally with revulsion. Compulsive in all of her behaviours—talking, drinking, pill-popping, lying—Jasmine is hard to take even by the standards of Allen’s usual harridans, and Blanchett goes all in on the performance, recalling not so much Vivien Leigh’s tremulousness in Streetcar but the brittleness of Judy Davis in Allen’s acidic Husbands and Wives (1992).

Jasmine’s repellence is compounded by the fact that neither of the Stanley manqués on hand—Andrew Dice Clay as Ginger’s first husband and Bobby Cannavale as her new boyfriend—are the least bit interested in her sexually. The role of wannabe ravisher falls instead to the nebbishy dentist (Michael Stuhlbarg) who talks in an Alvy Singer stammer and haplessly forces himself on Jasmine, who has taken a rent-paying job as his assistant. It’s an uncomfortable scene for the way it reconfigures the archetypal nerdy Jew/shiksa goddess dynamic into a sleazy parody of Streetcar’s climax. It also plays into the idea that Jasmine’s real fear is of downward mobility: she’s terrified of straying too far from the WASP’s nest. Her yen to become an interior decorator is a source of much cruelly mocking comedy, but at heart, she’s expressing the same yearning as did Blanche when she affixed that paper lantern to a bare bulb: it’s about trying to recreate what she imagines is her natural habitat.

That Blue Jasmine is laboured in its plotting should come as no surprise. Allen has always had a wonderful sense of narrative complication dating back to his whirligig plays and short fictions, but limited suppleness as a screen storyteller. About half of what happens in Blue Jasmine is utterly predictable without being especially likely—as when Jasmine and her new beau run into Ginger’s ex-husband on the street and he reveals all of her past sins—and since he’s stripped away the fable-like flourishes of Midnight in Paris, the contrivances upend the pretense of realism. Sometimes, it feels like Knicks fanatic Allen is using a trampoline to score slam dunks off of his characters, as when Ginger becomes foolishly smitten, and is then summarily discarded, by a schlubby suitor (Louis CK, on autopilot); although Hawkins acts the moment of abandonment beautifully, she’s being emotionally brutalized so that Allen can create a parallel with Jasmine’s cruelly thwarted romance. (Ginger gets her reward at the end of the movie, and yet the vision of couch-splayed domestic bliss Allen conjures up isn’t half as sexy as Stella storming out at the end of Streetcar: who doubts that she’ll end up back in Stanley’s arms yet again?)

Blue Jasmine ends where it began, with Jasmine alone and babbling, ostensibly to strangers but really only to herself (if the last scene is intended as a goof on Forrest Gump [1994], then it’s Allen’s funniest bit of movie satire in years). She can’t even depend on the kindness of strangers, because she won’t shut up long enough to let them get a helpful word in edgewise. Allen has long had a strange fetish for manic street creatures—Alvy Singer fretted about becoming the sort of person “who wanders into a cafeteria with a garbage bag, screaming about socialism,” and the existentially snake-bitten hero of “The Lunatic’s Tale” ends up wandering New York wearing a beanie cap—and Blanchett’s acting is powerful enough that this time, the depiction of psychic damage goes beyond a punchline.

At the same time, one is left with the feeling that a really great movie would amount to more than a thesis statement that rich people are so lonely and unhappy that they’re really crazy (or vice versa), and that a great filmmaker would find a way inside that madness instead of keeping his distance. The late Anthony Minghella was not a great filmmaker, but in The Talented Mr. Ripley he skillfully erected a complex web of desire and deceit between characters who all wanted to be anybody but themselves; and, at the edges of this entanglement, Blanchett made an indelible impression as a woman suffering from a double case of mistaken identity. Just as Meredith believes that the disturbed prole she meets while slumming it in steerage is actually one of her privileged peers, she also perceives herself as worldly and unconventional. The final scene hints that this self-infatuation may end up being a fatal attraction. I suspect that I’ll remember that ending—and Blanchett’s part in it—long after I’ve mostly forgotten Blue Jasmine.