Robert Koehler/CS79, Currency, From The Magazine 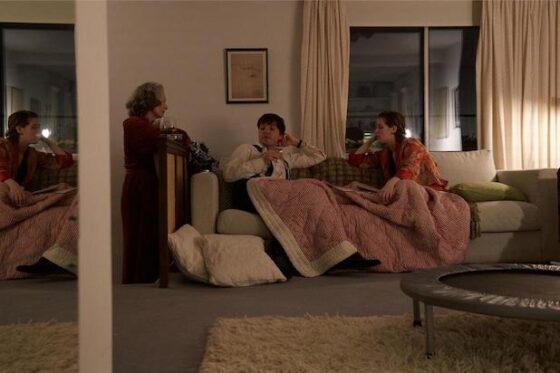 Given the evidence of Federico Fellini’s 8½ (1963) and François Truffaut’s Day for Night (1974), time isn’t kind to moviemakers who decide to leap into autobiography: too often, such an endeavour entails rampant solipsism, a romanticization of history, and getting the practice of moviemaking (and cinema itself) entirely wrong. When they too gave in to the impulse to look in the mirror, Chris Marker and Jean-Luc Godard took the craftier route of the auto-essay, a gambit that allows the artist to simultaneously author the work and get out of the way. Here, the voice of the author in direct exchange with the audience replaces the dramatized, unavoidably phony version of the author’s life; a conversation takes the place of an ego trip (or as much as one can ever have a conversation with such Olympian and reclusive figures as Marker and Godard).

The significance of Joanna Hogg’s The Souvenir is that we now have another writer-director who’s found a way out of the traps of dramatized memoir, even as her own history largely followed the same trajectory as that of her protagonist, Julie (Honor Swinton Byrne), who is struggling through her studies at the fictitious Raynham Film School in the early ’80s. After completing her own studies, Hogg landed a fairly successful career as a director-for-hire on such British TV series as London Bridge, London’s Burning, and EastEnders. She left TV behind in 2007 to make her interesting, nuanced first feature, Unrelated, which she followed with Archipelago (2010). Evincing a clear influence from the Berlin School (in their de-dramatized tone and use of a mid-range camera that takes in the full bodies of the performers and their surroundings), these first two features exude the tensile strength and focus of a fine string quartet work: while both centre on a woman in transition (played by Kathryn Worth in the former and Kate Fahy in the latter), they also expertly sketch out the interactions and exchanges between a particular circle of people (i.e., people with money and the ability to get away to leisurely locations).

Hogg shifted from this character web with Exhibition (2013), which is set mostly in the flat of two married, well-off London artists, the distaff half of which (played by Slits guitarist Viv Albertine) is contending with both her internal creative process and enigmatic external threats—a move from the extensive to the intensive that revealed a certain discomfort in Hogg’s handling of fewer characters. If The Souvenir can be best understood in the context of Exhibition—given its focus on a contemporary woman artist juggling her artistic and personal lives—it’s less a do-over than yet another bold (and this time, more successful) shift in approach, even as Hogg reasserts some of the key strengths of her first two films: her well-honed deployment of shock cuts and tendency to drop the viewer into a scene in medias res; and, by giving each person who matters in Julie’s life—including her mother (played by Tilda Swinton, leading lady Byrne’s mother and Hogg’s longtime friend), her Tory-ish father, her friends, fellow students, and teachers—their own moments inside the story, her expansion of what might have been an extremely inward drama into a broader view of an ’80s England engulfed in the Northern Irish Troubles.

The opening images of The Souvenir are rough, black-and-white photos of the dying industrial town of Sunderland, which are revealed to be Julie’s research material for her initial thesis-film idea: a Loachian drama about a working-class lad whose mother is dying, a far cry from Julie’s own reality as a privileged young woman living off her folks’ money in tony Knightsbridge. Following this cold open, the film sticks close to its protagonist’s point of view, with a roving camera that follows Julie through the house party she’s hosting, where she first encounters Anthony (Tom Burke), a civil servant in the Foreign Office with whom she enters into an unlikely courtship. Hogg’s early predilection for ensemble construction grows more complex and multilayered here, as she gradually maps out the assorted (male) influences bearing down on Julie: from her conversations with Anthony, who offers some surprisingly solid advice about how to develop artistic confidence; to an amusing dinner party that is dominated by Anthony’s jaded filmmaker acquaintance Patrick (Richard Ayoade), who tells Julie that film school is a total con and nothing more than a low-cost supply centre for equipment; to scenes with Julie in class with her teachers and mates, where things are actually learned and applied.

It is ultimately these latter scenes—particularly one in which Julie and her classmates watch one of their teachers’ own documentaries, about legendary jazz drummer Art Blakey’s mentoring of young players—that gradually and cumulatively reveal Hogg’s intent. Above all else, and contra Patrick’s blanket dismissal of film school, The Souvenir is about learning: about how a woman with a camera (both Julie and Hogg) undertakes the extremely difficult work of recalibrating her artistic mission and confronting the things that truly matter to her. Heeding her teachers’ suggestions that her initial proposal is rather distant from her own experiences, Julie works through successive drafts of the project until she makes her own breakthrough in cinema form and language: a camera trained on a solo female actor reciting, first, from a Shakespearean text, and then, in the finale, from Christina Rossetti’s “Song,” a verse reflecting on a painful farewell.

This is about as far from a Sunderland kitchen-sink drama as one can imagine, and it is also what makes The Souvenir the anti-8½: where the latter ends with a forced attempt to magically resolve the self-created problems of a director whose only point of reference is his own stunted self, the former is about a burgeoning artistic life overcoming both personal limitations and outside distractions. It’s also about building a survivor’s thick skin, in life as well as art. Julie doesn’t know how to deal with the imposing Anthony, who threatens to consume her life not only with his dominant personality and seeming wisdom, but also with the demons he conceals from her view, both professional (his ambiguous involvement in the British government’s handling of the Troubles) and personal (he’s a closet junkie).

When Julie learns of Anthony’s addiction via a throwaway comment from Patrick, she reacts with a stare of frozen shock, as if she’s entered into a new territory without a map—and, since Hogg never overtly announces that her film is a memoir (the title refers to a Fragonard miniature that Anthony shows to Julie early in their courtship), she leaves eerily open the possibility that Julie and Anthony’s relationship might be a fatal case of liebestod. (The hints of this come through in foreboding shots of a Venice canal that precede a disastrous lovers’ holiday, capped with a night at the opera for Verdi’s La forza del destino.) Maintaining this narrative tension to the very end, in a manner reminiscent of Christian Petzold (another resolute formalist who doesn’t abjure the classical pleasures of suspense), Hogg achieves a balance of aggressive stylistic tropes, expert storytelling control, and a careful courting of audience engagement (“Engagement, not escapism,” as Julie defines it at one point) that suggests a way forward for contemporary narrative cinema.

Posted in CS79, Currency, From The Magazine