The Rider (Chloé Zhao, US) 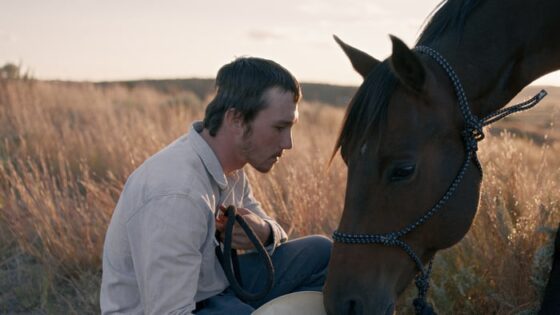 Having worked with horses his whole life and without any other means to make a living, Brady Blackburn (Brady Jandreau) is left without his passion and his livelihood after he incurs a head injury during a rodeo. His shaved head gleaming with bloody staples, Brady subsists on a cocktail of pills during his recovery, while dealing with localized seizures and frequent, involuntary tightening of his hands due to nerve damage. Though his health depends on him staying away from horses, Brady is unable to abandon his risky lifestyle. Beyond the fact that wrangling is his only means of supporting himself, breaking these untamed, aggressive horses is a part of his nature: to walk away out of fear or concern for self-preservation is to both betray himself, and the macho cowboy community to which he belongs.

Chloé Zhao’s sophomore feature The Rider is a film rife with such difficult compromises and contradictions, and one that is clear-eyed enough to see the complex interplay between choice and coercion. Even as they are immersed in a toxic masculine culture of rules and codes, misogynistic jokes and proudly recounted sexual exploits, Brady’s fellow cowboys also offer genuine support and affection; conversely, despite Brady’s evident discomfort with his friends’ teasing, he is not simply a victim of his culture, but a willing participant. When the other cowboys push him to ride through his physical pain, they remind him that he once gave them the same advice. When a younger boy inherits Brady’s rodeo costume, Brady challenges him to a wrestling match where he hurts his smaller, inexperienced opponent to assuage his feelings of impotence. While sidelined, Brady spends time with his friend Lane Scott, a former rodeo hero paralyzed by an accident, participating in Lane’s fantasies of getting back in the saddle again as the injured man basks in YouTubed memories of his past triumphs.

That these contrasts ring so authentically rather than constituting a simple, schematic point-counterpoint is surely due to the fact that The Rider was created in collaboration with its subjects: Jandreau is a true South Dakota cowboy whose own experiences helped shape the film’s narrative, and his father and sister also play versions of themselves for the camera. Even as the film pointedly examines the negative pressures of masculine mythology upon real people (Jandreau as much as his character), it does so without outright condemnation. This culture that destroys is also one that sustains; a milieu that is fuelled by the lust for domination and public celebration also prizes modesty and humility as parallel virtues.

Even more so than most, a film such as this, which functions between the realms of reality and fiction, must be conceived and analyzed as a work of collaboration. If Zhao, an outsider who had only recently begun living in this community when she started filming it, is the nominal author of The Rider, by the creators’ own admission this is not the work of a single, controlling artist.

In drawing so much from Jandreau, his friends and family, Zhao places her film in their hands; and by giving of themselves so generously to Zhao, these contributors are endowed with her aesthetic sensibility and facility with cinematic form. The Rider is a true group effort, with collective and diverse artistic labours producing a work with considerably more nuance, perspective, and sensitivity than it might otherwise have had.

As narrative, as character study, and as an act of true artistic collaboration, The Rider is rewarding and powerfully moving. But this creative communion nonetheless leaves out perhaps the most important collaborators: in this film that revolves around horses, there is never a question about the roles these animals are made to play within the lives of humans. Without voices of their own, or a narrative being told on their terms, the creatures at the centre of the film become anthropomorphized projections of human motives and desires. A horse that gets scratched by a barbed wire fence is presumed to have been chasing mares—a mirror to Brady and his friends’ dishing about Lane going after girls, wherein human sexual urges are made conversationally animalistic (Lane is a “dirty dog”).

On a more complex level, Brady’s relationship with horses is (presumably) more profound: he treats them as if they were his friends, and speaks to them as if they understand him (and he them). Halfway through the film, he begins to train an untamed stray named Apollo, and soon forms an intense bond with him. The scenes of them riding possess great beauty, the camera gliding alongside the pair as they rush through the sun-dappled landscape as though sharing one body. But this physical (and spiritual) communion is only reached after Brady systematically brutalizes Apollo in training: he slaps and whips the horse, screaming expletives at him before mounting the animal. Following the ultimately predictable vein of Zhao’s storytelling (for all its delicacy of feeling, The Rider is certainly not a subtle film), Apollo, who has naturally become a symbol of Brady’s hopes for recovery, is eventually hurt and must be put down; in the aftermath, Brady outright states that just as he, like Apollo, is injured and can no longer do what is natural to him, so he too should die.

The rather embarrassing obviousness of this scene aside, the conflation of man and animal here is illustrative of the conceptually reductive treatment of the film’s core relationship. As there is no sense of Apollo’s existence beyond being Brady’s avatar, there is no reason for us to question or consider it. Brady sees his breaking of the horse as positive and the riding of him as a form of bonding, and, accordingly, so do we. Conversely, however, one could regard the training as a violent assertion of human dominance over the animal world, and the riding sequences as evidence only of subservient obedience. Subsumed by the relentless human centrality of narrative, the stories of these horses go unexamined in a film that puts everything else into words.

This incomplete consideration of how animals exist alongside humans reveals the cracks in The Rider’s compassionate facade. On one level, it is a work of rare empathy, straddling perspectives, experimenting with conventional notions of authorship and attribution, and subverting (while still respecting) a mythology that is too often either accepted wholesale or shallowly condemned. But it also demonstrates the typical occlusion and objectification of non-human collaborators in art, never truly recognizing natural difference nor questioning (presumed) human supremacy. Where Zhao’s title foregrounds Brady and his cowboy ilk, one could conceive creating a counterfilm of one’s own from the images on screen to combat this conventional perspective; call it Au hasard Apollo.