Courtney Duckworth/CS77, Currency, From The Magazine 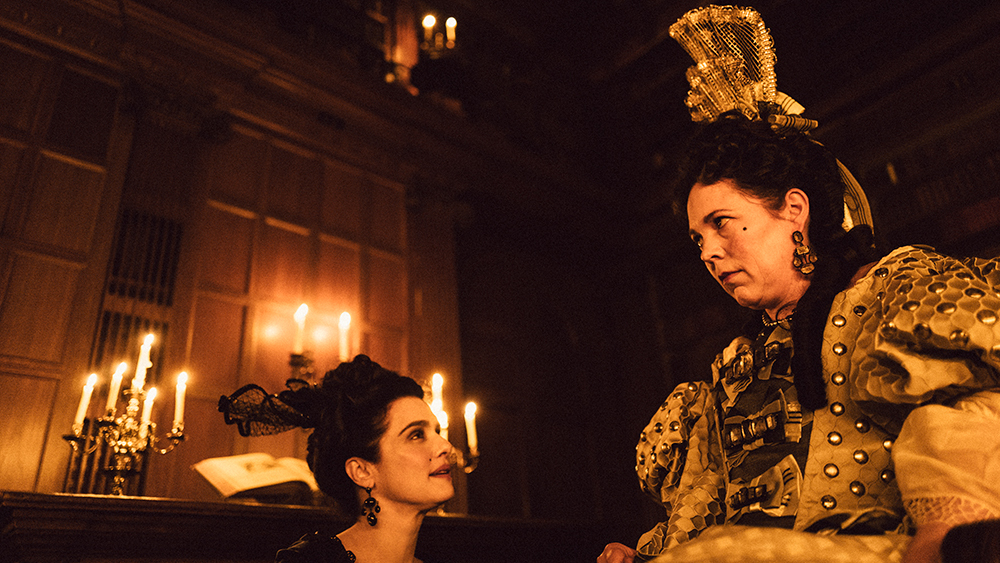 Yorgos Lanthimos begins and ends his scurrilous The Favourite with the susurrus of rabbits. Tricky to place, almost subliminal over the opening parade of myriad multinational financiers, the strange sounds scratch at the ear. Soon we understand: the rabbits are the odd, probably apocryphal, attendants of Queen Anne, who presided over Great Britain in the early 18th century. From the first scene, Anne (Olivia Colman) cajoles her confidante Sarah Churchill (Rachel Weisz), Duchess of Marlborough, to coddle them in their bedside hutch. Flinty, Sarah replies, “Love has limits.” It’s a funny line, slyly referencing a retainer’s love for her sovereign. But when we discover the two are lovers, and that each rabbit signifies a child Anne has miscarried or lost—a crushing 17—the mulish rebuff takes on a crueller cast. “Love”—as a word, as a concept—becomes multivalent. Later, Anne thrills to the coos of Sarah’s cousin Abigail (Emma Stone), as if starved of love. Her femme Lady of the Bedchamber hoists a velvety creature and smiles—a murky gesture, construable as affection, skulduggery, or something in between.

Charges of coldness have circled Lanthimos’ films since the Oscar-nominated Dogtooth (2009). His actors often recite their lines in “deadpan” (a word the laconic Greek resents), with a blank, atonal cadence that sometimes scans as tiresome affectation. But the mode draws less from arthouse gravitas than the puckish games of avant-garde troupes—magazine profiles describe his casts vaulting across tiles or pressing their faces against each other’s posteriors while elocuting—or the ascetic nonprofessionals of Robert Bresson, whose rigorous automatism is the aim. Too stiff, performances can ossify, as in the clinical suburbia of The Killing of a Sacred Deer (2017). Still, the chill of Lanthimos’ hermetic narratives can stoke modest, unassuming sparks of feeling into brighter blazes. In The Lobster (2015), his first English-language film, a poncho-clad pair (Rachel Weisz and Colin Farrell) whose coupling is verboten sync their Walkmen and gyrate a few paces apart like gangly adolescents—a moment with the absurd sweetness of touch deferred.

On the surface—surfaces being the métier of frock flicks—The Favourite appears to be a departure: the first period piece from Lanthimos, and the first since 2001 where he is not a credited co-writer (Tony McNamara and Deborah Davis’ script had languished in development since 1998). Ribald coinages (think “cunt-struck”) and poisoned barbs tumble from the rouged mouths of courtiers, whose waggish repartee accrues into burlesque (Sarah retorts to an ogling colonel: “Would you like a bite of my new maid?”). Cinematographer Robbie Ryan whip-pans the camera down hallways as corseted ladies spew litanies of four-letter words, or uses a fish-eye lens as they aim their pistols on manicured lawns. Ryan shoots Queen Anne’s palace—filmed at Hatfield House, in Hertfordshire—where the plot is mustily confined, in the candlelit Kubrickian tradition of Barry Lyndon (1975). Shot in 35mm, at the mercy of natural light, The Favourite frequently captures its characters contre-jour, or so cloaked in chiaroscuro that faces are obfuscated. By contrast, courtly corruption is garish, the lacquer sometimes laid on a smidge too thick: powdered members of Parliament race ducks in grotesque slow motion, or chuck pomegranates at a tittering nude. Debauched and floridly attired, with exaggerated mouches and unwieldy wigs, the men (including Taylor Swift’s boyfriend Joe Alwyn as a studly dope, dutifully promoted on her Instagram) are sidelined for bare-faced, cannier women. Anne, Sarah, and Abigail are the triune fulcrum of the film, and in that The Favourite parallels Lanthimos’ others: claustrophobic relationships squirm in the vise-grip of byzantine forces.

Vagarious, widowed, childless, and ridden with gout, Queen Anne is helplessly hogtied to Sarah, her friend since youth, who navigates the court in her absence or doltish presence. Estranged from affairs of state, Anne more than once doesn’t know if England is at war—the War of Spanish Succession, a wide-scale conflict that remains unexplained. Shades of sadomasochism undergird their rapport: rakish and mordant, in a drag king’s raiment of angular tunics, leather riding breeches, and feathered tricornes—courtesy of costumer Sandy Powell, who repurposes modern fabrics like denim to scramble period fidelity—Sarah stage-manages crises for the splenetic, jowly ruler. She wriggles into the lacunae left by the Tory queen to foist her Whiggish policies and buttress her military husband, John Churchill (Mark Gatiss), but her convictions are deeply felt: echoing the opening, she asks, “There are limits? To love of your country?” Devoted to queen and queendom, she flourishes when her schemes encompass both. Yet somehow tenderness survives the mutilating baton of power: ditching a sybaritic ball, Sarah careens Anne down a corridor with shared, impish joy. Ensconced in a boudoir, vassal mounts liege, and the inamoratas winkingly consummate the real-historical jab that Anne had “noe inclination for any but one’s own sex”—then a taunt, now a ringing endorsement. Of England’s monarchs, only Anne retained women as her puissant Keepers of the Privy Purse.

The delicate dyad swells to a knotty ménage à trois when Abigail clatters into the rear end of the palace in a cramped carriage, from which she topples into the feces-flecked muck. Abigail is a lapsed aristocrat whose father gambled her maidenhood to a “thin-cocked German,” then razed their ancestral manse and, with it, her fortune. Sarah’s cousin, she settles in among the “scullery scraps”; with their ruthless hazing of lye burns and whippings, who would not feel desperate to escape? Fortunes reshuffle when Abigail concocts an herbal salve for the ailing queen, and Sarah, confessing a taste for “the weak,” makes her a lady’s maid. From her loftier perch, Abigail launches a covert battle for nobility that comprises self-harm, seduction, poison, crocodile tears, and coquetry. As a nonbeliever, I must admit that Stone scintillates: attentive even in respose, her Abigail engorges her eyes to reflective saucers or narrows them to flitting points. She watches Sarah to contrive her catch-as-catch-can coup in a near-reprisal of Anne Baxter in All About Eve (1950), as understudy-then-usurper Eve Harrington, of whom one woman warns: “She’s studyin’ you, like you was a play or a book or a set of blueprints.” Telling, then, that Abigail is always reading.

Thrashing around in a stickier snare is Queen Anne. Sovereign de jure, but inveigled by her venal court and sequestered from her public—limited onscreen to a harlot who remedies a drugged Sarah—she is more isolated than galvanized by her birthright. Stroppy when Sarah jilts her to “run things,” Anne wails: “It’s my state! I’m the business of state!” Shots of Anne alone linger to squeamish lengths, as she idles against the tapestry-draped door connecting her and Sarah’s suites or wavers before an expectant Parliament in a heaving gown and drooping diadem. Profligate fish-eye lenses distort already capacious rooms to ridiculous dimensions, yes. But they also delimit labyrinthine spaces that would otherwise seem infinite—revealing gilded ceilings or stone arches as the bars of Anne’s cage—and shrink her to a little girl lost, recalling a slouched Joan Fontaine cowed by a looming fireplace in Rebecca (1940). Faultless, Olivia Colman is bilious and vulnerable, quivering her brow and flopping on the floor in a daffy heap when pleased—as rabbits do when contented—or lurching from her wheelchair to seize a random baby in frantic terror over those she has lost. A nauseating sequence where Anne binges on cake, an accelerant for her worsening gout, in view of servants too subordinate to deny her, is more sensitively articulate than any monologue. Lurking in the background of each scene is the muffled spectacle of her merciless deterioration—illness as the final fissure that unmoors her, completely, from other people.

Often accused of ham-fisted endings, Lanthimos triumphs here. Deflating our delight, he puppeteers a rollicking game only to unveil it as futile. Snuffing our laughter, he unnerves: in an unmistakable death knell, an ennui-addled Abigail sprawls with a midday flute of champagne. Freed from their cote, Anne’s coneys traipse the airless chamber in surreal abundance, an indulgence Sarah barred, and Abigail crushes one beneath her arching heel. Anne reacts, inscrutably. Tumbling from her towering bed with a thud, she tugs at Abigail’s hair and subdues her with a clawing grasp to steady herself. Relentless, the camera fixes itself on Abigail’s gnomic gaze as vertiginous cross-fades of rabbits, converging and accumulating, swarm over the image. What has Abigail won? Abigail and Anne are now immured in a purgatorial play of power, without the frank but serrated emotion Sarah supplied. Beseeched to pardon Sarah, Anne had snapped: “There are limits to what one can give”—one wonders if she means love after all.

Posted in CS77, Currency, From The Magazine