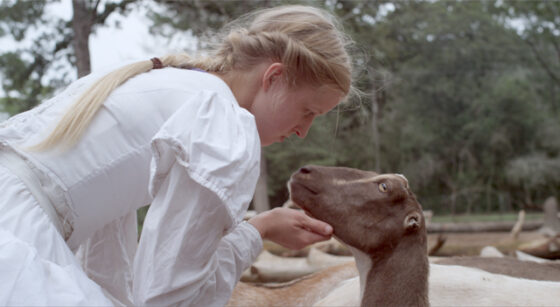 Faith, so often deployed as narrative substance, is a phenomenon (or noumenon) that’s difficult to represent with film. It is often reduced to milieu, mood, or mere matter: think transcendental styles and stylized transcendance, either abstractly implied or imposed in formulary fashion (Bresson’s ascetic methodology vis-à-vis Malick’s metaphysical morass). A character either desperately needs it or has far too much of it, and narratives turn on this. But as participant spectators, some of us can’t help but be perennial disbelievers.

How, then, to make believers of us when it comes to fictional or actual characters struggling with faith, be it holy or secular? Considering that Roberto Minervini’s Stop the Pounding Heart is determinedly set within a devout community of (mostly female) goat-herding cheesemakers and (mostly male) gun-toting bull-riders, the inevitable question becomes: What kind of crisis will faith provoke when a crisis of faith invariably arises? To what end might Minervini put his characters—who are non-professionals effectively playing themselves—through their paces if not for some perverse pleasure of using suffering as a narrative trope? Both religion and the workings of faith easily lend themselves to convenient anachronisms, easily legible characters and, at the least, cautionary tales against the perils of believing too strongly in anything in our post-everything world. And for an Italian-born director on the loose in the republic of Texas, the temptation to exploit loaded cultural signifiers is more liable to lean towards wilful exoticism than bracing lyricism.

Indeed, such a premise seems to force a reckoning of the material at hand as either over- or underdetermined. Too much drama, or not enough. Like Carlos Reygadas’ Silent Light (2007), to which the film will fairly be compared, the seeming strangeness of the setting is at once a decoy for further ontological inquiry (filmmakers rarely inhabit the worlds they are so keen to depict), but also presents a confrontation with the hazards of ironic filmmaking and spectatorship (can filmmakers nonetheless faithfully depict these habitats?). In both Silent Light and Stop the Pounding Heart there’s a manifestation of a sense of immanence: that although no revelation can be wrought from the camera’s gaze upon man’s suffering or the material world attending him, there is something revelatory in the insistence and carefulness of that gaze, its staging, and the lives exposed in it. The blurred distinction of fictive and documentary characters is revealing here in that neither is exempt from the real.

Curiously, Stop the Pounding Heart bears out the notion of simply….bearing. An unforced yet palpable tension exists in the encounter occasioned by 14-year-old Sara (Sara Carlson)—the camera pulling behind her blonde braids as she works the pasture—living in proximity to young cowboy-in-the-making Colby (Colby Trichell), who is similarly fenced in with his bovine and brotherly community. The contrasting pair’s barely shared physical and emotional space is mined with a delicacy that typifies the furtive gestures of young romance. “Just milking goats,” Sara replies to the boy’s polite questioning, as he saddles real or mechanical bulls, offering instruction to anyone who casts a curious glance at the ring. “It’s simple,” he tells her with a grin, though all evidence—time spent in the chutes is certainly not wasted—points to the contrary. She retreats back to her family life, which consists of Bible study with her 12 siblings (Genesis 9:7, “Be fruitful and multiply”), while he grapples with tattooed buddies, suffers bouts of asthma, and shoots skeet. There’s little convenient backstory, no causal connections to set tragedy in motion, just the rhythm of an unsensationally observed rural lifestyle, captured in Minervini’s (and DP Diego Romero Saurez-Llanos’) spontaneous but fluid shooting method. Neither entirely unstaged nor wholly natural, the film registers in that liminal formal space that has come to define a particular cinema zeitgeist.

A pounding heart, of course, can’t be stilled without satisfaction, or recourse to sublimation or repression. Much of the film’s invocation of scripture, dutifully provided by Sara’s parents, is a euphemistic attempt to stave off Sara’s inevitable curiosity about the people whom God has set in her path to ‘‘bless, encourage, and refine” her (in certain secular communities, it is simply referred to as “sexuality”). Sara’s mother, who is drawn with a keen awareness to her steadfast yet sympathetic attitude, advises that succumbing to longings not pure of heart is akin to the fleeting indulgence of eating sweets: a lesson of valiant maternal instinct, but perhaps lacking a certain faith in nature’s course. Less easy to countenance is the verse that states, “Neither was the man created for the woman; but the woman for the man” (Corinthians 11:9), an injunction that seems to be foreclosing Sara’s sense of her own future.

Minervini’s vested interest might have been more exposed by such provocations of ideology; the implicit query at stake seems to be, does he condone or condemn, believe or not believe, what he’s filming? Yet the director remains dedicated to letting the single-take scenes unfurl with little intervening judgment but an eye for intrinsic drama (administering iodine to a goat’s infected udder, for example) that exists in the gaping space before us that more hegemonic cinema seems to have taken for granted. Credit Bresson, Rossellini, and especially Cesare Zavattini (architect of neorealism who made a call “to excavate reality, give it a power, a communication, a series of reflexes”) for giving charge to the otherwise unspectacular element of movies, to which Minervini has yielded with increasingly effective results. Low Tide (2012), the second feature in the Texas trilogy, doggedly pursues an adolescent boy suffering a summer of torpor while his single mother becomes increasingly absented by work and drink. Little happens, but the overwhelming feeling of boredom and alienation exacts a melancholy power that can be traced through to Sara’s impasse in Stop the Pounding Heart.

The Lord works in mysterious ways, i.e., apparently at rodeos. Colby and his cronies aren’t keeping company with the devil, in spite of appearances. Bull-riding competitions are preceded by prayer, and one reborn cowboy evangelizes to a younger generation while conceding to the “emotional side of spirituality.” It is this all-too-human aspect, neither pious nor heretical, that Minervini appears intent on tracing. Transgression, both for those struggling with their faith and for films in search of an author, may be the easy way out. The lack of narrative determinism is, naturally, a healthy let-down; owing to the unmet expectations sustained by the unrevealing drama that nevertheless tests the tensile strength of religious belief. But why not admire such sustenance itself—in the subtlety of Sara’s expression caught in the act of ambivalence, of Colby taping his worn ropes, of fresh milk wrapped in cheesecloth, of a .45 pistol holstered at the hip—without having to gawk at Confederate sensibility? The private trimming of a skirt suggests more than could a transgressive roll in the hay, while a rather candid home-birthing scene defies symbolization.

Mercifully, Minervini shows an abiding faith in the power of restraint, even if such powers of withholding, like Sara’s abstinence, may constitute an austere variation on indulgence. Acts of faith are typically promising (i.e., predictable) for either delivering us from, or sealing us into, ourselves. Sara’s mother, in a tenderly didactic encounter, attempts to assuage the girl’s doubts about being a good Christian. States of conviction and doubt can be measured in bliss and anguish, but it is the leap of faith that is hard to render on camera. The spiritual style in cinema may strive toward this ineffable and invisible essence, but any claims on behalf of film or faith to transcend this are specious in nature. Like a good disciple, Minervini entreats humbly upon his material. More than the sum of its avowed influences, Stop the Pounding Heart evidences a supplicant style of filmmaking.