By Robert Koehler In Cinema Scope Online, CS68, Currency, From The Magazine, TIFF 2016 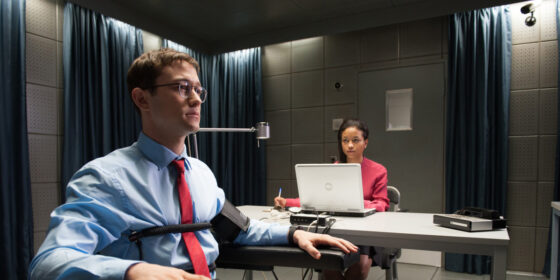 If Snowden, director Oliver Stone and screenwriter Kieran Fitzgerald’s version of the Edward Snowden affair, is remembered for anything, it will be as the first Hollywood movie that turned Barack Obama into a bad guy. Time was, back in the day when Obama walked on water, there was a thing you could call “The Obama-Era entertainment.” Danny Glover’s President in 2012 (2009), for example, is positively Obama-esque to the core. A decade before Obama, Hollywood had already imagined a black man in the Oval Office with Tommy Lister Jr. in The Fifth Element (1997) and Morgan Freeman in Deep Impact (1998). (The best and funniest is Terry Crews’ wild POTUS in Mike Judge’s prescient Idiocracy [2006].) Since there can be a cultural lag to our political movements, the new rom-com piece of Obama nostalgia, Southside With You, and the TIFF-premiering Barry, capture the young Barack and the happy side of the Obama Era while coinciding with the recent uptick in Obama’s domestic popularity.

Snowden, on the other hand, takes us back to the bad old days of the Obama Administration, when it oversaw and defended the most nefarious worldwide surveillance of citizens to date. The top of the top-secret US spy agencies, the National Security Agency (NSA), had constructed, post-9/11, a broad and unfettered system of data-gathering that didn’t just target specific security and terror threats to the homeland, but swept up communications across all digital platforms, from everywhere. The system’s program, codenamed “Stellar Wind,” collected metadata on countless numbers of citizens without a legal warrant. As a staffer at the CIA with remarkable cyber skills and then later as a consultant employed by private clients partnered with the NSA, Snowden witnessed first-hand and helped refine this growing surveillance network.

As many non-Americans know by now, “Stellar Wind” and the NSA’s other metadata-gathering systems spied on many other nations’ citizens, including close US allies and its leaders (most notoriously, Germany’s Angela Merkel and Brazil’s Dilma Rousseff, and even, much to his embarrassment, the UK’s own David Cameron). Although the NSA’s projects were initiated under the Bush Administration by Vice President Dick Cheney, they were accelerated under Obama. It’s still difficult to gauge what was worse: the shock of the network and its universal penetration that Snowden revealed, or the shock of Obama’s responsibility for what some term “the end of privacy.”

Snowden, though, contains another shock: that Stone (of all people) somehow turns all of this—and more—into a square, boring movie. It’s impossible to read the primary text upon which Fitzgerald’s script is based, Guardian reporter Luke Harding’s breathlessly written and meticulously researched The Snowden Files, and not imagine a whopper of a nail-biting thriller. Consider the irony and paradoxes of Snowden’s (played with fine sobriety by Joseph Gordon-Levitt) personal evolution from a right-leaning Republican libertarian utterly devoted to his government to a right-leaning Republican libertarian cyber-liberator and “traitor.” Consider the cloak-and-dagger suspense involving Snowden’s sudden departure from the US to a hideout in Hong Kong, his arranged meetings with filmmaker Laura Poitras (Melissa Leo), investigative journalist Glenn Greenwald (Zachary Quinto), and Guardian reporter Ewan MacAskill (Tom Wilkinson), and the intense discussions and communiqués involving these four, with Guardian editor Janine Gibson (Joely Richardson) personally battling with key White House national security figures. Consider the rising paranoia by the hour, as Snowden grows more and more certain that he will be arrested before the Guardian can publish stories based on the spy files that Snowden has smuggled. Consider Snowden’s wild flight to Russia and his absurd, Beckettian lockdown in the Moscow airport, followed by his virtual disappearance. Consider the profound political thunderclap felt around the world, which, in Germany at least, was known as “Der Shitstorm,” conjuring deep German memories of Nazi and Stasi surveillance.

The movie that we have in front of us is a faint murmur of the politically explosive entertainment it could have been. At almost every step of the way, Stone opts for the uninteresting, even risible choice. When Gordon-Levitt’s Snowden arrives for his first day at the CIA, whom should he run into but Nicolas Cage as a grizzled spy instructor, sending out a (false, it turns out) note that Snowden is actually a thriller-comedy. Then there’s the theatrical glowering of Rhys Ifans as Snowden’s spy handler Corbin O’Brian (an obviously fictitious version of Snowden’s actual boss, Keith Alexander), who teaches his young genius about the deep, awful truths of post-9/11 national security. Ifans will continue to pop up during the course of the two hours-plus, more or less playing the stock spymaster-in-hat-and-suit performed for Stone in conspiracy films past by Max von Sydow and Donald Sutherland, and looking sillier with each appearance.

Stone and Fitzgerald’s most fateful and disastrous choice, though, is to devote large slabs of their story to Snowden’s dreary and uninvolving relationship with his longtime girlfriend, Lindsay Mills (Shailene Woodley). This angle was chosen presumably to humanize a humble and reclusive computer geek, but the result hijacks the narrative, turning what should be a tense thriller freighted with rich political and ethical themes into a Lifetime movie of the week. It’s bad enough that Gordon-Levitt and Woodley have the onscreen heat factor of ice cubes (her fault, not his); worse, they have little to play with once it’s repeatedly established that she’s a playful sort who just wants to live life, and he just can’t tell her anything about what he does because, well, he works for “the State Department.”

The intent of this kitchen-sink dross is to provide more insight into what makes Snowden tick. But Poitras captured this far better and more economically in her film Citizenfour (2014), shot mainly in the Mira Hotel in Hong Kong’s Kowloon district where Snowden met with his journalist co-conspirators, passed along his smuggled files, and conducted his first on-camera interview, with Greenwald interviewing. Not only was Poitras able to bring out, sometimes in classical painterly portraiture, many essences of Snowden’s personality—the calmness of his conviction, his ability to convert anger into a political analysis of the erosion of Constitutional principles, his subtle sense of humour—but her film also captured the hothouse pressure building up in the hotel room.

Harding’s book makes that room into one of the two centres of an extraordinary drama. The other room is Guardian editor Gibson’s New York office, where she finds herself negotiating between increasingly terrified and exhausted journalists and a justifiably paranoid source, and the full force of a White House learning that the NSA’s golden goose is about to be unleashed in public. Snowden doesn’t ignore this natural setting for a crackerjack movie, but it weirdly underplays it, almost as if it can’t be bothered. Instead, the hotel scenes are used as mere framing devices for the relationship movie. What actually transpired in Gibson’s office—leading to her decision to publish—was one of the most dramatic and bravest episodes in recent journalistic history, one that easily ranks with the tensest moments in the Washington Post newsroom during the early reporting on Watergate. Stone stages these scenes like an afterthought, leaving a growing question of why he wanted to make a movie about Edward Snowden in the first place.

The only lasting notion—other than Stone’s desire to remake Born on the Fourth of July (1989), to which this bears some clear resemblances—was that he could be the first establishment Hollywood director to stick it to Obama. There’s something subversive in this, in a way, but it doesn’t energize the routine nature of the enterprise, and in no way helps audiences understand the wider implications of the grave political threats arising from a security state with no legal levers to stop its blanket invasion of privacy. The good news for everyone else—including other filmmakers—interested in the subject is that the definitive, comprehensive Snowden drama has yet to be made.