Under the Skin (Jonathan Glazer, UK)

By Blake Williams In CS58, Currency, From The Magazine 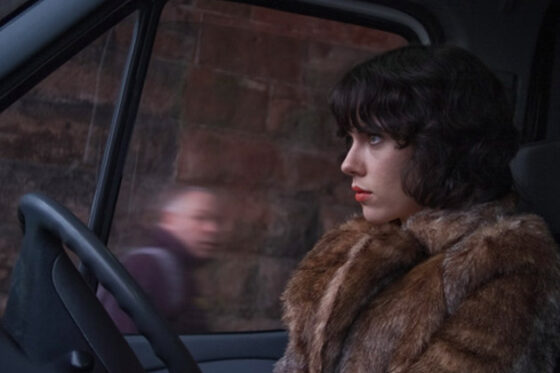 In their attempt to adapt of one of those ornery “unfilmable” novels to the big screen, Charlie Kaufman and Spike Jonze transformed Susan Orlean’s The Orchid Thief into a meta-satire on film adaptations called, appropriately, Adaptation (2002). Following a short prologue in which Kaufman (played by Nicolas Cage) is shown being shooed away from the set of Being John Malkovich (1999), Adaptation begins with an introductory establishing montage that depicts no less than the history of planet Earth leading up to Kaufman’s own birth: bacteria form, dinosaurs are obliterated by an asteroid, an ice age comes and goes, and finally we see a newborn discharged from a vagina in an explicit, Brakhagian close-up. It’s a grand, all-encompassing, and ambitious set-up for a film, and—as acknowledged by Kaufman in a later scene—is the product of unencumbered artistic hubris. Orlean’s non-fiction novel has virtually no plot, character development, or material expressions of human emotion, and thus provided little in the way of elements with which to model a conventional cinematic narrative. Devoid of these elements, the film argues, the adapter dialectically turns outward—toward the big questions of life, humanity, and the universe—and inward, toward his or her own indulgences and pretenses.

In the opening minutes of his decade-in-the-making science-fiction film Under the Skin—an adaptation of Michel Faber’s virtually unfilmable 2000 novel of the same name—Jonathan Glazer positions himself as the latest heir to Stanley Kubrick the Millennials have been clamouring for. In a sequence that resembles fellow British director Chris Cunningham’s Kubrickian music video for Björk’s “All is Full of Love,” the screen—a pitch-black void—is slowly engulfed by ominously enlarging black and white orbs framed in perfectly centered alignment with one another, evoking the phenomenon of pupil dilation. Finally there is a cut to exactly that, mimicking the multi-coloured cutaways to Dave Bowman’s eyes as he blasts through the Star Gate, a sequence further manifested in Under the Skin’s subsequent movement of images when tungstens, sodium vapours, and fluorescents streak across a motorcyclist’s glossy black helmet visor as he zooms along a Glaswegian highway at night.

Glazer is preparing us for something stark and cosmic, intimate and grandiose: basically, anything and everything. He primes us for a metaphysical odyssey that can only really be sourced to the final pages of Faber’s book—a text that could never have been faithfully adapted to the screen with a straight face, nor without more than a generous serving of CGI. Glazer has radically deconstructed his unfilmable source material and reassembled the few fragments he has retained into a sociologically ambiguous mood piece. What was originally a bonkers and sententious parable about class, labour, and the horrors of the meat industry—run by a race of talking antelope-like beings from another planet—is now essentially an abstract coming-of-age picture.

Laura (Scarlett Johansson), birthed into human form as something of a sexy beast, is given a single task: to lure as many men to her den as she can get hold of, where she’ll seduce them into entering a pool of dark fluid; there, they’ll float steadily as if displayed in a Damien Hirst formaldehyde bath, and finally have their insides squirted out and slurped up by the universe’s most psychedelic conveyor belt. Her process is methodical and repetitive, and takes up the whole of the film, until all of a sudden it doesn’t anymore. Prompted either by her sympathetic encounter with a lonely and extremely deformed virgin (performed, sans make-up, by South London television fixture Adam Pearson) or just having reached that stage in a girl’s life, Laura releases her captor, abandons her mission before we are able to ascertain its purpose, and sets out into the world where she will discover what her body can really do, and why all these men are so willingly hypnotized by it.

While this first half of the film is a meticulously calibrated experiment in grafting an avant-garde anti-narrative onto an alien femme fatale scheme, the second largely abandons the sleek stylistic display for something more aesthetically subdued. The decision to have Laura try humanity on for size represents a shift that doesn’t immediately sit well, but it is only a misstep insofar as it undoes the rigorous rejection of characterization that made her behaviour and tasks in the first hour so paranormal and unnerving. Whether or not the film could have coasted on such a stubborn elision of meaning for its entire duration is arguable, but its bait-and-switch rhythm is abandoned just as it becomes routine. Seeing the stoic murderess expressing something like compassion initially seems illogical, even dumb, because it suggests that the degree to which she is a simulacrum runs further beneath the surface than we imagined. Laura, it’s revealed, wasn’t merely designed to superficially appear human, but must have also been “programmed” to emote like one, too. Probably not coincidentally, this is the moral quandary at the heart of the conception of HAL 9000, as well as A.I. Artificial Intelligence (2001).

It’s this potentially deceptive association between appearances and inner thoughts and feelings that has preoccupied Glazer for two consecutive films now. His previous drama, Birth (2004)—in which a ten-year-old boy seduces a woman he’s never met by convincing her that he is the reincarnation of her dead husband—features neither aliens nor robots, but the entirety of the film’s dramatic weight is propelled by the impact of an imitated narrative that ultimately rendered the banal into something illusorily mystical. In Glazer’s cinema, the manner in which knowledge is acquired is more important than the possession of it, because the acquisition is so often fraudulent. Laura may not be privy to her sex’s maternal instincts, having dispassionately ignored the nerve-curdling wail of an abandoned baby after she murdered its parent on a beach, but her later susceptibility to pathos situates Under the Skin’s central question as one derived from epistemology. Is her understanding and demonstration of mercy learned (implicitly incited by her encounter with the deformed man) or is it intrinsic to being in the universe? (This is perhaps Glazer’s most significant thematic diversion from the novel, as Faber makes it explicitly clear that his aliens’ mother tongue doesn’t even have an analogue for the English word “mercy.”)

The brutal conclusion that Glazer’s film settles on ultimately rejects any precise answer to that query, and opts for an arthouse-flavoured downer of a final scene that veers the into decidedly feminist territory. (Glazer could just as convincingly cite Catherine Breillat’s À ma sœur! [2001] as his inspiration as he could Faber’s book.) It’s a dimension that’s embedded in the film’s fundamental construction, so it’s not like it lands out of nowhere, but it’s hard to stomach that a filmmaker engages in such fickle bet-hedging when it comes to positioning his work into an ideological or thematic framework. It’s clear that Glazer wants his film to be about a little bit of everything, but he does so at the risk of accomplishing nothing at all. His grandiose ambitions do leave us with a genuinely beautiful a coda, though, as the ashes of Laura’s incinerated body scatter like snow across the Scottish landscape. This is actually a return to Faber’s text—and is one of the few elements in it to which Glazer stays moderately faithful. Shifting the narrative back toward the metaphysics from which it began, Glazer sends all of Laura’s anxieties and tensions up in flames; ashes to ashes, dust to dust, and atoms to atoms. The obliteration of molecules erases the very notion of alienation, and the estranging world from which Laura fed ultimately returns the favour, and consumes her right back, indiscriminately.