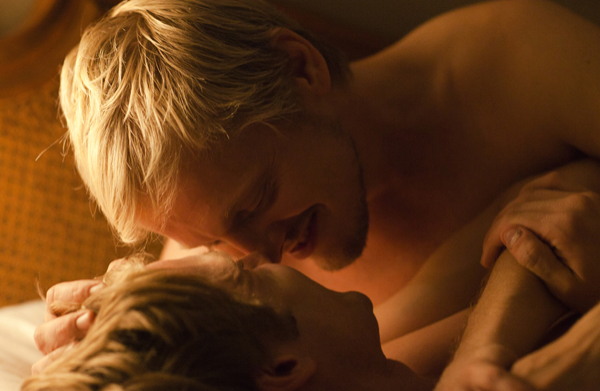 Keep the Lights On begins with a very modern kind of masquerade: from his single bed in a Brooklyn apartment, Erik (Thure Lindhart) tries to sell himself as a sneering stud to a series of strangers on a gay-sex party line. Yet while this opening creates an expectation that the film will be an account of a man with a mutable personality, Erik turns out to be a steadfast figure, whether resolutely editing his under-funded documentary or supporting his boyfriend Paul (Zachary Booth)—first introduced as merely the hottest of Erik’s chat-line hookups—for nearly ten years as the latter struggles with drug addiction. Though by all accounts based on writer-director Ira Sachs’ relationship with literary agent Bill Clegg (who previously detailed the couple’s experiences in his 2010 memoir Portrait of the Addict as a Young Man), Keep the Lights On is not a case of he-said/he-said; it’s no more a hatchet job of its Clegg stand-in than it is a valorization of its authorial surrogate. Rather, both Erik and Paul are perceived (and acted) with the combination of curiosity, surprise and indulgence that has become Sachs’ signature across four uneven but unmistakably humane features.

It’s Erik, however (and perhaps unsurprisingly), who really comes into focus. Endowed with an intriguingly ambivalent edge by Lindhart—making a left turn from his swashbuckling shtick in the 2008 resistance drama Flame & Citron and cutting an engagingly strange figure with his sharp features and large, soft eyes—Erik seems to regard Paul’s self-destructive behaviour as simultaneously an affront, a betrayal, a challenge, and, maybe, an escape hatch. Keep the Lights On is at its best when it foregrounds Erik’s contradictory impulses towards a life partner who disappears for days at a time, and at its weakest when he and Paul are doing well—though that’s arguably part of the overall design. The title cards that indicate the duration of the relationship, starting in 1998 and ending in 2008, are deployed somewhat ironically, since for all of the big-time upheavals—fights, revelations, an intervention, and at least one devastating relapse—neither Erik nor Paul ever really changes. Paul is aloof and guarded, Erik is aggressively clingy, and in both cases these traits are a cover for deeply rooted fears: Paul’s detachment masks the extent to which he is at the mercy of his addiction, while Erik devotes himself to a damaged man in order to deny an innately promiscuous spirit that has clearly been a source of troubles big and small for most of his life.

While the characterizations are rich, the film’s style is rather blank. Sachs says that he studied Maurice Pialat’s work before shooting, but the compositions feel more indebted to Philippe Garrel (although maybe that’s just because of all the moping and drug-taking). Largely to his benefit, Sachs has never been an especially ostentatious directorial presence, and Keep the Lights On duly stumbles with its one overdetermined sequence, a dark-hotel-room-of-the-soul interlude where Erik punishes himself by bearing grimacing witness to Paul at his lowest point; the resultant tableaux of debasement is a little too consciously “powerful,” in the manner of the Other Steve McQueen. This misstep aside, the film is quite skillfully engineered underneath the omnipresent soundtrack cues by Arthur Russell. Sachs’ canny choice of Athina Rachel Tsangari’s regular DP Thimios Bakatakis (who most recently shot the high-gloss, high-fashion hijinks of Tsangari’s The Capsule) proves a boon when it comes to shooting the film’s realistically fleshy sex scenes—most notably Paul and Erik’s first coupling, which is filmed in an intimate, appreciative long take that leaves the choreography to the actors. Reverse Shot’s Michael Koresky has smartly observed how the opening credits, which unfold over male nudes drawn by Sachs’ husband Boris Torres, rhyme with the erotic thrust of this first hookup, and also how that charge gets progressively dimmer as unbridled passion mutates into something at once homier and comfortably numb over the course of the film. Even more commendably subtle than these finely detailed emotional gradations is Sachs’ use of New York, which by forgoing familiar markers both locational and historical (September 11 comes and goes without mention) prevents the film from becoming a contemporary time capsule and keeps the focus on Erik and Paul’s turbulent situation.

Sachs’ lack of interest in the changing tides of fashion dovetails nicely with the documentary that Erik is working on, a biographical portrait of queer-art axiom Avery Willard which features a lot of wizened old scenesters reminiscing about their salad days in the New York underground—a narrative conceit that both implies a marked distance between artistic generations (Erik, Paul and their friends all orbit the establishment) and places Erik’s earnest, cash-strapped endeavours within a longer cultural continuum. (Interestingly, In Search of Avery Willard is a real documentary; director Cary Kehayan let Sachs piggyback on his shoot to give the impression that his characters were behind the cameras.) Prefiguring Sachs’ own Berlinale citation earlier this year, Erik eventually wins a Teddy Award (in a scene that gains in authenticity both by being shot at the festival and for the cameo by a certain unmistakable NYC publicist), and his stricken expression when he can’t reach Paul on the phone to inform him of his triumph is one of the film’s most lasting images: a crystallization of Erik’s concern and exasperation that portends the likely collapse of the relationship.

A couple of scenes later, drunkenly walking back to his (empty) apartment from a nightclub with a Latino art student incongruously named Igor (Miguel del Toro), Erik is, if not recovered, rebounding—he’s a coyly charming mess, sorely tempted both by circumstance and the attractiveness of his pickup. As with the opening phone-Lothario business, the point is not that the character is some sort of shape-shifter or put-on artist, nor that he is callowly avoiding his worries about a lover who may be lost to him once and for all. What we’re seeing are not signs of  inconstancy, but rather the behaviour of someone trying to do right not only by his absent partner, but also by the seriously divided urges left in his wake. Keep the Lights On never quite succeeds as a portrait of two people in passionate thrall to each other, partly because we know (or can at least easily infer) where things are going—the film’s whole reason for being is that it is based on a relationship that didn’t work out. But it’s extremely effective (and affecting) as a character study of a man coming to realize that he’d rather be his whole self than somebody else’s better half.