Kiva Reardon/CS52, Currency, From The Magazine 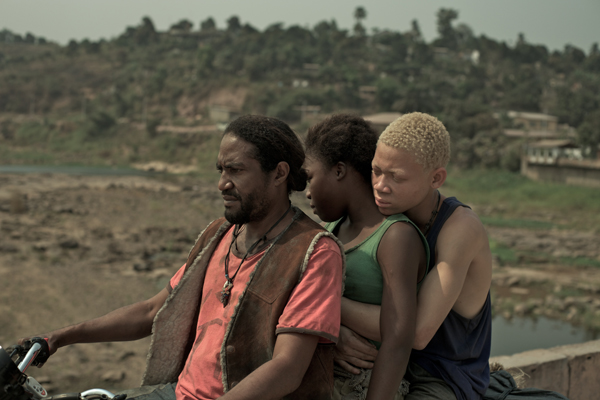 The year in cinema has been stamped with a modicum of magical realism. First up at Sundance was Benh Zeitlin’s Beasts of the Southern Wild, a film routinely described as “lyrical” and “heartwarming.” Now there is Montréal director Kim Nguyen’s Rebelle, arriving at fall festivals after bowing in Berlin and taking top honours in Tribeca. The films share similarities beyond critical buzz: both are shot from the perspective of young girls, use amateur actors, and mobilize contemporary tragedies (post-Katrina New Orleans and African child soldiers, respectively) to set their scenes. That said, merely placing Rebelle in such divisive company without further elaboration does the film a disservice. More accomplished than Zeitlin’s work (and with no sparklers), the choice to blend the issue of child soldiers with the supernatural is more than merely whimsical, though ultimately no less problematic.

Rebelle is set in an unnamed African nation (the shooting took place in the Congo) during a civil war. Komona (played by Rachel Mwanza, though the narration is read by Diane Uwamahoro) tells the story of her life to her unborn child in stilted voiceover. Her basic observations—“I had to learn to make the tears go in my eyes,” she flatly states—are meant to make the horrors of her life all the more tragic when contrasted with her naïveté. Similarly, Nguyen’s main strategy is to swing manically between the horrendous and the idyllic to create a sense of tonal dynamism. We meet Komona at age 12 when Great Tiger rebels take her from her village. She is forced to kill her parents. She is drugged, starved, and brainwashed. She is literally haunted by the ghosts of her victims. The plot points echo newspaper stories on the contemporary crisis of child soldiers, which, when combined with the shaky hand-held camera, suggest the film purposefully strives for a documentary feel in between its phantasmatic elements. Mid-way through the film, however, Komona and a fellow child solider, an albino called Magicien (Serge Kanyinda), run away and fall in love: cue the lyricism.

This section feels like a film within a film, clearly demarcated by over-scoring and complete with a marriage plot involving a quest for a white rooster. While this reeks of pulling a Benigni—after the insufferable example par excellence of making the inhuman palatable, Life Is Beautiful (1997)—Nguyen seems to negotiate this transformation with more nuance. Though the love-story interlude offers some reprieve from the graphic horrors, Nguyen works hard to remind us the war is never far away: the Butcher (Ralph Prosper) keeps an empty bucket next to him as he hacks at cow carcasses, ready to catch his vomit as he’s reminded of what machetes did to his family. While at times Komona’s narration drives this point too forcefully home, there are subtle audio cues which are far more unsettling, as the film’s soundscape attunes itself to Komona’s perspective. For instance, the heightened sound of a machete hitting a tree upsets the calm of Komona and Magicien’s village life, recalling the use of the tool as a weapon in their hands. Such choices render this amorous pause more complex than a traditional love-in-wartime tale. And yet, it is only to mediocre ends. The problem with Rebelle is that despite the human suffering, the stakes feel incredibly low. Komona is protected by her narration (she is literally the master of her story) and magic. Both social and supernatural in nature, this magic takes form in the way in which she is protected after being named the rebel leader’s “war witch,” being the sole survivor from her village. This shielded position of power, when combined with the apparitions (which in one crucial battle protect her), early on reassures the audience that she will live, overcome, etc. The neo-Western ending—a truck driving towards the horizon, suggesting our child heroine rides to a brighter future—only reaffirms such sentiments.

Moreover, what suggests Rebelle is having its fantasy cake and eating it too is the film’s aim of universality. Though the details of the narrative recall stories of child soldiers in the Sudan, Rwanda, and Sierra Leone (Nguyen has said in interviews the film is based on a story from Burma), the ambiguity suggests the desire to mobilize the issue towards a Triumph of the Human Spirit tale. As always, the risk in such a move is apolitical desensitization, the whitewashing of a tangible issue for the sake of a grand narrative. Indeed, this becomes most apparent in the figures of the ghosts that plague Komona. Played by actors covered in a gray paste, their interpretation is decidedly theatrical in execution (think Julie Taymor), but the imagery further borrows from the figures emerging from the dust on 9/11, or the baby in the firefighter’s arms after the Oklahoma City bombing. Materializing from the brush and climbing over dark rocky outcrops that contrast with the pallor of their skin, the ghosts are not only fantasy-cum-art house figures, but literally other worldly. Though meant to be the incarnations of people killed in a specific conflict, they suggest an idealized view of shared suffering—the notion that we are all haunted by global conflicts.

Indeed, the film opens itself to such a reading the moment Jean-Claude Van Damme’s face appears, via an onscreen citation of Universal Soldier: Regeneration (2009). Sandwiched between a scene of Magicien play-fighting karate style and the children relaxing while watching Van Damme in action, the clip is one of the few moments that acknowledges the wider world. (The irony of their relaxation being so saturated in violence cannot be missed, couching a Haneke-style media critique in a film set in the Third World). But Van Damme’s visage also points to a precise pun on the title: universal. Combined with the film’s lack of a specific geopolitical locale, Rebelle posits an uncomfortably tidy “we are one” element.

This problem is not unique to Nguyen’s film—see similar discussions surrounding Claire Denis’ White Material (2009), which also eschewed local specificity while grasping at allegorical meanings—but this does not excuse them. Beyond the issues of false equivalencies (i.e., whether it’s drawing them), there is an ethical imperative in assuming another’s tale of suffering and transposing it to a collective—especially when that collective is a (predominantly festival) theatre audience. While the film might have gone the “misery porn” route (and some might say it does), the way in which Rebelle wears magic on its sleeves implies the film edges towards the other end of a myopic spectrum: feel-good positivity.

Additionally, as the film is so visually accomplished (thanks to Nicolas Bolduc’s cinematography), its beauty raises the question of the politics of magic. In a drugged state, Komona leans backwards marvelling at the treetops overhead, which blur into a blanket of rustling green. Though it’s an aesthetically splendid sequence, to note such feels unethical given the narrative circumstances. It is these moments which recall similar problems with Beasts of the Southern Wild and other films which insist on blending the magical with their tragic realism: a form of liberal indulgence, it hinges on the perceived notion of seeing the right “art” film—one whose politics are comfortably aligned with a left-wing status quo—while never being forced to deal with an uncomfortable reality. It’s a parlour trick, creating the illusion of activism while passively watching. Dark arts, indeed.