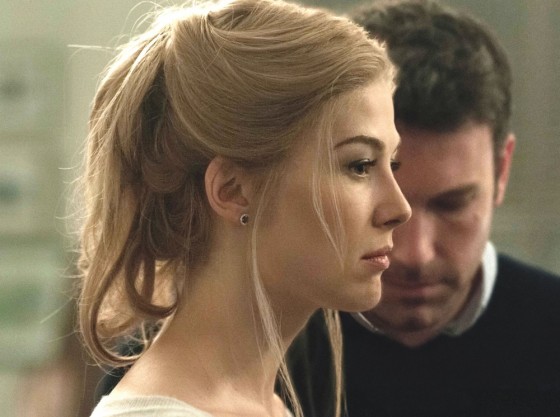 Lest anybody doubt that Gone Girl is a comedy, consider that it includes, in no particular order: a scene where America’s favourite bad actor Ben Affleck is coached on his line readings by a character played by a well-known Hollywood film director (Tyler Perry); that his punishment for uninspired delivery is having Gummi Bears whipped at his head; that elsewhere Neil Patrick Harris is cast as a super-wealthy beta-male who lives in the sort of isolated lakeside fortress typically stormed by James Bond (and whose ideal vacation itinerary includes “octopus and Scrabble”); and that at one crucial juncture, a major character who is completely drenched in blood and dressed only in their underwear drives up to the side of the road in broad daylight and exits the car to the appreciative response of a gathered throng.

Skillfully rewritten by Gillian Flynn from her own best-selling novel and elegantly directed by David Fincher—who is now apparently our patron saint of paperbacks—Gone Girl is, for the reasons listed above and a whole host of others, very, very funny. Clearly in a jovial mood, the filmmaker who Manohla Dargis recently designated our Dark Lord even times his own onscreen credit so that it immediately precedes a shot of Affleck’s unemployed magazine writer Nick Dunne carrying a battered board-game box into the bar he owns and operates in the less-than-picaresque-and-in-fact-downright-dilapidated hamlet of New Carthage, Missouri. The name of the game is Mastermind, which is the most amusing auteur vanity card since Sofia Coppola plastered her own name over a bejeweled necklace spelling out “Rich Bitch” at the beginning of The Bling Ring.

Essentially a disembodied director cameo, the shot of the Mastermind box cues us to view the ensuing proceedings through a Hitchcockian lens (and there are other, bloodier allusions to the Master later on). From there, it’s just a hop, skip and a jump to the kind of Kubrickian obsessiveness recently spoofed and vindicated in Room 237.To wit: when Nick puts Mastermind on the shelf, it’s piled on top of Emergency!, Let’s Make a Deal and The Game of Life, three living-room favourites that could have worked nicely as alternate monikers for the film we’re watching.

Gone Girl’s actual title refers to the sudden and suspicious disappearance of Nick’s wife Amy (Rosamund Pike), and any fair critical assessment beyond mere opinionating—OK, it’s the most entertaining American movie of the year so far, there you go—must include a discussion of her whereabouts and ultimate fate. It’s not enough to simply say that Flynn sets up an irresistible Lady Vanishes scenario in which the husband is pegged (by both the local authorities and the reader) as a prime suspect; plenty of thrillers, literary and cinematic alike, feature promising set-ups that go south. Gone Girl, though, is all follow-through, and it’s the precise nature of its revelations that gives it its power and makes it so widely polarizing, an overused word that absolutely applies in this case.

So without further ado, here it is: approximately halfway through the book (and around the same time in the movie), it’s revealed that Amy faked her own abduction to punish Nick for sleeping with one of his community college creative writing students; and perhaps more to the point, she also did it because she’s an absolutely monstrous sociopath. Flynn’s conceit of splitting the story’s action evenly in half between his-and-hers narrators (Nick and Amy), and then in half again between Amy’s forged and designedly self-serving pre-disappearance diary entries (her ace in the hole in implicating her husband in her fictional murder) and her more nakedly conspiratorial account of her life on the lam (“I’m so much happier now that I’m dead”), is as clever as anything ever devised by Ira Levin (and it directly echoes the bifurcated storytelling of A Kiss Before Dying, with a pinch of Patricia Highsmith). It’s been retained here, to a point: the difference is that by staging the Nick material at an omniscient remove, Fincher and Flynn entirely eliminate his interior monologue, which was (perhaps slightly dishonestly) laden with enough ambiguous observations and flat-out lies to suggest that he might be a villain. So even though Affleck convincingly sells the douchey, grown-up frat-pledge aspects of Nick’s character and leads with his “slightly villainous chin” (what a great piece of movie-star casting this is!), we’re given no compelling reason to ever doubt his innocence—a state of affairs that only serves to heighten both the surface and latent misogyny of the narrative.

Leave aside for a moment the fact that Amy (ably played by Pike, whose icy eyes and scarily symmetrical physiognomy are perfectly matched to the part) is a walking contradiction of trust-fund-suckling arrogance and bottomless insecurity, which manifest themselves in a cumulatively repellent and terrifying combination of diffidence, dishonesty and self-preserving amorality (she even spits in another woman’s drink); or that her insane actions are sparked by the discovery that her husband is fooling around with a younger, sleeker rival; or even that she’s not above giving head to get an enemy into a fatally compromising position. Excise its blonde-tressed black-widow antagonist altogether (goodbye, girl) and this is still a movie about a man harried at every turn by needy, grabby, and otherwise unflatteringly depicted women: unscrupulous groupies, media mavens, disdainful mothers-in-law, slatternly baby-baking neighbours, and so on. When Nick’s twin sister (Carrie Coon) discovers his affair, she reacts like a jilted lover, and she doesn’t seem to have a life outside her brother’s embroilment; even the level-headed detective (Kim Dickens) assigned to his case views our hero through a half-wary, half-desirous lens.

And make no mistake: this is all intentional, and it’s satirical, too. It’d be a little too convenient to trace an entirely clean break between the genuinely problematic female characterizations of The Social Network (2010) and the overtly ghoulish gals of Gone Girl, but it’s probably safe to say that Fincher—whose recent interviews in Sight & Sound and Playboy confirm that he’s now approaching his idol Kubrick in the imperious self-awareness department—knows that he’s been seen as a bad gender politician in the past; hell, it could have been what attracted him to this material, which is controversial in a way that buttresses rather than blocks its commercial appeal. It’s amusing that some people (men and women alike) who will watch Gone Girl and inevitably recoil from its brazen political incorrectness—including one jaw-dropping gore scene that goes beyond anything described in the book and feels like some unholy combination of Psycho’s shower scene and the opening credits of The Girl With the Dragon Tattoo (2011)—will probably place the blame on Fincher, when he’s simply faithfully translating the action and the attitude of Flynn’s book (aided and abetted by the author’s own screenplay).

So, to hold Flynn accountable (and to give her credit), Gone Girl is indeed awash in misogyny, but played up to such a degree that the insidious ideology is rendered absurd, and cathartically so at that. A colleague offered up Paul Verhoeven’s Basic Instinct (1992), itself a Hitchcockian pastiche, as one possible corollary, and the comparison makes sense: recall that Michael Douglas’ scummy, womanizing San Francisco detective—also named Nick, come to think of it—is both imperilled and vindicated by the arrival of a legitimate man-eater in the form of Sharon Stone’s Catherine Trammell, Amy Dunn’s spiritual progenitor and deep-down soul(less) sister (as well as a clear precedent for Pike’s performance: like Sharon Stone before her, Pike is no spring chicken, and subtly works her relative-veteran status into her performance).

Basic Instinct’s paranoiac sexism and homophobia boomerangs back first on Douglas’ white-collar white male—it’s as if he’s willed his world of demented and dangerous ladies into being—and then onto the viewer, who is forced to interrogate their own enjoyment of such retrograde archetypes. With this in mind, the very best parts of Gone Girl—the last 25 minutes, after Amy has returned of her own volition with blood literally on her hands (she sensually washes it off in another Psycho shower-scene nod), an unlikely story on her lips and reconciliation in her heart—suggest a sequel of sorts to Basic Instinct, if that ice pick had stayed safely stowed away after all. What would it be like to live with somebody who you know is crazy, and who you suspect might be capable (mentally and also skill-set-wise) of killing you at any moment?

Or, in other words: What is it actually like to be married? Gone Girl’s portrait of domestic bliss as a kind of personalized thermonuclear détente is glib and obvious, but it’s also deeply satisfying, albeit in different ways in two different mediums. In the book, we’ve spent enough time with Nick the callow, resentful prick—the one who harbours murderous fantasies even if he doesn’t act on them—to feel like he at least partially deserves his fate walking on eggshells around his magnanimous gorgon of a wife. The fraudulent façade the mutually loathing couple displays to the world from inside their gilded suburban cage has the ring of poetic justice for both parties. In the movie, where our sympathies are finally torqued more in Nick’s direction, Amy’s malevolence plays more as a sick joke; I particularly liked how Nick’s tabby cat, whose well-being he considers even when he’s being arrested for murder one, pointedly sidles up to his returned mommy (probably because that’s how things tend to go in my house, too). And the final shot fully consolidates this latter point of view: it’s a piece of head-on portraiture à la Kubrick, a woman’s face with lowered eyes, simultaneously inviting fear and desire.

Speaking of Kubrick: at this point, praising Fincher’s meticulous craft is old hat—even a movie as bad as The Girl With the Dragon Tattoo qualifies as a proverbial silk purse. And yet the compliment that comes to mind about Gone Girl is that its maker’s mastery is all rather self-effacing. While Jeff Cronenweth’s grey-scale lighting and Trent Reznor and Atticus Ross’ room-tone score are familiar (and welcome) elements, the attention-getting stylistic tics of his previous features are scarcely in evidence here. The great artistic leap forward of Zodiac (2005)—its methodical and metaphysical treatment of time and space—has played out in ways great and small in the years since (i.e., the wonderfully distended opening credits of The Social Network, which show the time it takes to traverse large physical spaces as a way of setting up its mouse-click-quick virtual world), but the upshot is that midway through his career, Fincher is a master both of framing (his controlling, Kubrick side) and of pacing, the latter a virtue he has cultivated apart from his influences. Gone Girl runs exactly two-and-a-half hours, and it moves like a shot from a silenced pistol. As it heads into the home stretch, in fact, its velocity starts to feel positively screwball, which makes perfect sense insofar as Flynn’s story of boy-meets-girl, girl-gets-gone, boy-gets-girl-back is, finally, a comedy of remarriage—one to freeze Stanley Cavell’s blood in his veins.