Robert Koehler/CS73, Currency, From The Magazine 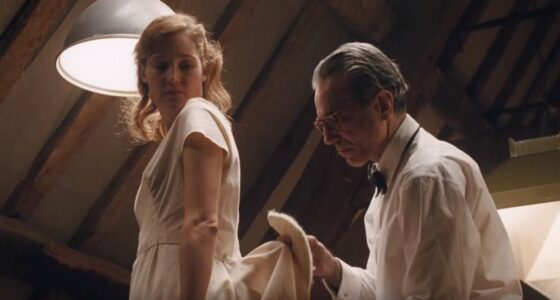 SoCal being SoCal, it’s hard to leave it, especially if you were born there. The only good joke in Beatriz at Dinner has someone cracking wise about living in Newport Beach and the problem of going on vacation: Where do you go, since the best weather is here? People who don’t know the San Fernando Valley, birthplace (Studio City) and residence (Tarzana) of Paul Thomas Anderson, don’t appreciate how the subtext of Inherent Vice (2014) is the liberating relief of being at the beach, from which the Valley is separated by the giant wall of the Santa Monica Mountains. Even though the novel was a case of Thomas Pynchon returning to the scene of the crime—Manhattan Beach, where he wrote Gravity’s Rainbow—the movie was a case of Anderson getting out of the Valley and exploring a different kind of vibe. It’s what Valley folks had been doing for decades, especially during the summer, when you flee the blistering heat, trek through Topanga Canyon or the Sepulveda Pass, and drink in some of those ocean breezes. You could stay there forever.

It turns out that Anderson just kept going, all the way to London. His new movie, Phantom Thread, is set in the world of mid-’50s London couture, when the city was regaining its elegance after WWII. A large debt is owed to Daniel Day-Lewis, an actor who inspires some of Anderson’s best instincts and who co-wrote the screenplay, but apparently begged out of sharing screen credit. There are many things that can be said about Phantom Thread, but one that’s indisputable is that, with this movie (which may or may not be Day-Lewis’ last), we find the most interesting and richly renewed director-actor relationship in American movies since Anthony Mann and James Stewart.

Day-Lewis’ character is couture designer Reynolds Woodcock, whose House of Woodcock is the brand of choice for European royalty and the nascent celebrity culture. Anderson, Day-Lewis, and the movie’s costume designer, Mark Bridges, studied the work of the great Balenciaga, whose modern and elegant designs defined a new direction for couture in the ’50s. Woodcock, like Balenciaga, is private, exacting, and supremely tasteful. He’s a demanding boss; this is the movie’s first characterization of him, from the mouth of Alma, the woman who changes his life, played with furtive subtlety by the Luxembourgish actor Vicky Krieps. She tells an unseen, offscreen listener that she’s given herself entirely to him, and those who’ve seen the recent documentary Filmworker may be instantly reminded of Leon Vitali’s identical remarks about working for Stanley Kubrick for 30 years. The early signals are that this will be a study of how a genius swallows up a human being.

This is the first misdirection among Anderson’s many hidden surprises, much like the little embroidered messages that Woodcock enjoys secretly sewing into the garments of his creations (source of the odd title). Alma enters Woodcock’s life with a stumble, tripping past a chair while serving him at a coastal resort hotel restaurant, and appears to be as taken with him as he is with her. Soon there is no doubt who has the power in the relationship. It’s his restaurants that they frequent. It’s his associates and clients that she sees. It’s his clothes that she’s soon wearing. And it’s his commanding sister Cyril (Lesley Manville) with whom she will have to negotiate if she has any chance of surviving, let alone thriving, in the House of Woodcock.

Again, a misdirection. Much like The Master (2012)—Phantom Thread can be seen as its British companion, a study in male authority ruling over a set of acolytes in the postwar era—the woman may in the end be the master after all. It would ruin a lot of the effect of Phantom Thread to reveal what Alma is up to, but simply know going in that Woodcock’s realm, House and all, isn’t his to control, despite his deepest dreams. This is not the Daniel Plainview (these character names!) of There Will Be Blood (2007), a monstrous capitalist insect sucking the life out of everyone around him, including other monsters. Nor is this Rebecca (1940), a movie that’s already been too easily referenced—including by PTA himself—whose power relations track dramatically in quite different ways than here.

One of the striking aspects of the new movie is that there are, fundamentally, no bad people, and that everyone has their reasons. Woodcock doesn’t realize that he needs love in his life until it’s there, facing him, while Alma doesn’t realize that Woodcock isn’t all-powerful until she sees that it’s Cyril who really runs the day-to-day ship, and who sees a lot in Alma that could be good for her rigid brother. The screenplay, in a stark departure from all of Anderson’s previous movies, is a chamber drama whose setting and early dynamics suggest Harold Pinter, and Anderson fans anticipating the darkest and roughest possible drama might foresee a remix of Pinter coming by, say, the third or fourth reel of this 35mm-shot and projected film. It’s all there: a settled bourgeois routine disrupted by the intruder. Yet the threesome at the drama’s centre is alternately destructive and nurturing, momentarily at each other’s throats (and possibly worse), and then working together in true collaboration. Anderson hasn’t dramatized this more complex and adult dynamic before, and its alternating and unexpected shifts of power are likely what made Day-Lewis so dedicated to the project.

For a director who has been beloved—and sometimes criticized—for his set pieces, Anderson hardly allows himself any this time. Even a big show in the House’s salon, or a fitting session for a Belgian princess, is throttled down to fit inside the story’s flow. Anderson never allows the movie to stop for this or that showpiece, even though he knows he’s as capable of staging them as well or better than any living director. The tone is uniformly adult, with adult humour and adult behaviour, and so is the filmmaking, which assumes that beautifully lit 35mm film is the only real option there is, and that anything else is just second-rate. With its restricted spaces, flat aspect ratio, lovely filmic grain, and its interest in the dance between interior light and faces, there’s an inescapable comparison here to late Fassbinder, without the tilt into crazy angst.

Like Blow-Up (1966)—another case of a filmmaker replenishing himself by travelling abroad and filming a story on a craftsman-artist surrounded by women and losing his mojo—Phantom Thread is about a man who, falsely believing himself to be king of his realm, discovers vulnerability. Woodcock is reminded more than once of his place in the class system, that he doesn’t own the house in which his House is located; he’s paying rent to a wealthy client landlord. Like an architect, he’s bound to these clients, financially and spiritually: their bodies inspire his designs, and their money allows him to pay the rent. The thematic connection of designers and architects to filmmakers, and thus to the dreaded autobiographical thread, is never too fruitful for critics to follow, and it doesn’t work here at all. But what this project does reveal about Anderson is his interest in turning away from isolated obsessives toward the alchemy of collaboration. The course of Phantom Thread traces this narrative line with the precision of a couture designer following his pattern as he scissors through fabric. It could be that the Daniel Plainviews and Lancaster Dodds were the father-figure characters that Anderson had to plow through in order to get to Woodcock, a man who surrenders his patriarchy for something he never knew, and never imagined in his great plans: a partnership with an equal.

Posted in CS73, Currency, From The Magazine