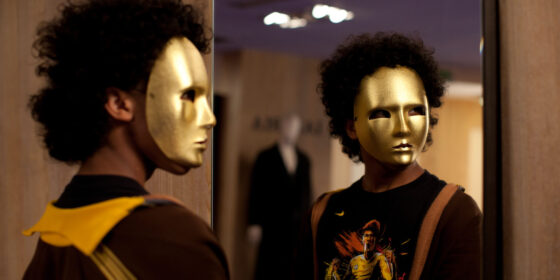 To waste no time: Bertrand Bonello’s Nocturama has nothing to say about either Nick Cave or the Bad Seeds, and, more crucially, is not a film about terrorism. Perhaps a strange assertion, the latter, given that the movie spends all 130 of its sublime, stomach-churning minutes in the company of a crew of young men and women who are in the process of executing a meticulously coordinated bomb attack on Paris. But here, as in Julia Loktev’s­ Day Night, Day Night (2006) and Kelly Reichardt’s Night Moves (2013)—two other semi-recent arthouse films that showed terrorism but were ultimately more concerned with matters pertaining to the psychology of paranoia, the fundamental complexity of morality, and the aura of their respective landscapes—ideology as a question or line of enquiry is provocatively mitigated in favour of purer, more abstract, and affective expressions. This isn’t to say that ideology is absent in Nocturama; on the contrary, it’s everywhere—all-encompassing, total, and final—and yet the film’s reticence toward obviously stating a position, its profound ambivalence toward passing the judgment on radicalism that a post-Hebdo and post-Bataclan audience perhaps desires, is glaring and improbably bold. So much so that our efforts to access it must re-route and search for alternative entry points if we are to be able to answer the question of what this movie even is.

At least with regards to what it is composed of, Nocturama is many things. Initially pitched as an action film, it turns out that Bonello’s latest has more in line with action painting, slathering onto its broad canvas an all-over mélange of genre iconography, pop appropriations, and historical reference points, and navigating through it all with impulsive shifts in attitude. Structurally, it’s neatly divided into two distinct parts—the performance of the attack and its aftermath—and splits its time between its initial labyrinthine tour of the Paris Metro (lines 1 and 13, in particular) and a selection of symbolic sites that collectively tell a very particular narrative of the city’s cultural and revolutionary legacies (Frémietthe’s bronze Jeanne d’Arc statue, the Ministère de l’Intérieur, the Paris Bourse, and the Tour Total) before hunkering down, in its harrowing second half, inside the eerie confines of a fancy department store. The former movement, recalling Rivette, maps out a mental matrix of a modern metropolis—its infrastructure geared toward best accommodating a tradition of commerce, or a commerce of tradition—and is largely constructed from long, wordless passages showing figures moving swiftly, gracefully, through this complex system of interconnecting routes, tunnels, and itineraries.

It’s a furiously cynical tour of Paris, and also a disorienting one—not so much spatially, but temporally. Nocturama is the third film in what can be called Bonello’s modernity trilogy, following his lush portrait showing the shuttering of a fin de siècle Parisian brothel in L’Apollonide—Souvenirs de la maison close (2011) and his soulful, shattered portrait of a fashion icon in Saint Laurent (2014), and it likewise presents time as indefinite, opposing conceptions of the present as concrete or ahistorical even as it works to augment the gravity of the present happening. Bonello’s choice method for achieving this is through shaping the film’s timeline into something that, were it to be graphed out, might resemble a lightning bolt—working through narrative events from one vantage only to fold back and re-show the same temporal moment again (and again). Many of his time warps are accompanied by either the reappearance of an onscreen time stamp or a repeated music cue, but many others arrive unmarked—especially when Bonello moves us further back in time, such as an extended detour through the initial planning stages for the attack—destabilizing our footing on already tremulous turf.

Tempting as it is to call Bonello’s montage Cubist, it owes just as much to Futurism, positing that the world as we perceive it is always in motion, requiring multiple lines of force to convey the sensations of simultaneity that define every developing situation. That his repetitions tend to favour moments of violence, re-subjecting us to and distending traumatic instants—or instants that become traumatic after so many exposures, whether via dreams, hallucinations, or stylistic coups de cinéma—suggests Freud, perhaps, but will nevertheless likely lead many to deem Bonello sadistic. The filmmaker has never been one to shy away from those historical phenomena and cruelties that we are always in the process of reiterating—perhaps wilfully, perhaps not. Like Saint Laurent’s compulsion to replace Moujik with more Moujiks, living becomes a domain for representations of ideas of happiness. If anything, his pleating of time in Nocturama in these instant replays of the film’s most piercing moments and events is Bonello’s earnest yet complicated attempt to evoke some feeling of our desires for the eternal—from Jeanne d’Arc to the French Revolution, through May ‘68 to now and forever. “It was bound to happen, right?” says/wishes Adèle Haenel in her cameo, because we want—need—to believe that we are participating in a history that will remember us the next time it loops back around and happens again.

Thus, when the kinetics of Nocturama’s literally explosive first half give way to the hushed stasis of the off-hours department store (shot in La Samaritaine, also a memorable location in Holy Motors [2012]), it’s only fitting that Bonello transforms the movie’s relationship to reality into something closer to that of a horror film. Cloistered in this paradise of state-of-the-art material goods, Nocturama, following in the tradition of zombie films like Dawn of the Dead (1978/2004) and 28 Days Later (2002), shelters its players in an environment that offers them the possibility of unlimited consumption—a utopian no-where away from the panic that’s likely befallen the outside world. Decorated with mannequins—sinister automata, frozen in an infinite pose of life being lived, and, tellingly, wearing the same clothes as several of the characters—the space behaves like a haunted mansion rolled in designer sheets, crawling with the walking dead. Imagined apparitions arrive in dreams, impossibly delivering information from the past into the present; bodies dissolve into thin air; and, just because, reflections of lights in windows drift out of place, into space. Imitation likewise takes over—masks and costumes are donned and make-up applied; Shirley Bassey’s glorious “My Way” is lip-synced, gloriously; and, why not, there’s even a re-enactment of The Shining’s (1980) most iconic shot—all as a way of exorcising our cultural past in hope that it might obscure the sorrow of death’s inevitability.

Nocturama is not about death itself, though, as much as it is an attempt to channel our wills to escape the deterministic mechanisms that render existence as something already extinguished, devoid of agency or singularity or lasting import. That almost every character’s final words include either a declaration of love for another individual or a cry for heaven tells us precisely where Bonello locates our avenues for achieving the eternal—that is, outside of time, in another’s acknowledgment of us as essential and irreplaceable—and renders the heinous actions that they committed in the movie’s first half as not merely wrongheaded, which is obvious, but as the product of the very soul-denying institutions that they are revolting against. It was bound to happen, indeed, and it is bound to happen again. And so, to offer another, final reiteration, we can return to that most critical and painful line uttered in the last gasps of L’Apollonide—“If we don’t burn, how will the night be lit?”—which is, one, about as Romantic a phrase as has ever been spoken, and two, can be seen as an entire embodiment of Bonello’s view of life as a force for other and future lives. Applied again, now, to the dreamers of Nocturama—who literalize this utterance and the movie’s title, blazing so that we might see into the night more clearly—reveals this picture as a tragedy of the highest order.