“No One Can Survive In That Water”: Jane Campion and Garth Davis’ Top of the Lake 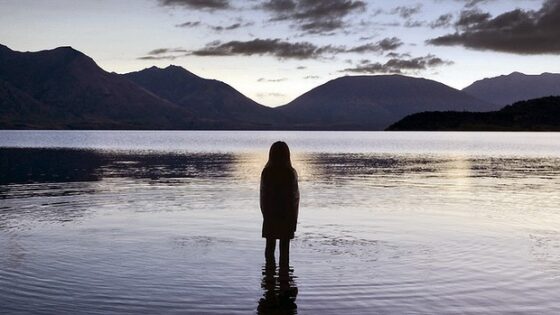 Although the new miniseries Top of the Lake had its world premiere this past January at the Sundance Film Festival, it is darkly fortuitous that it should have its television run two months later. March has seen the emergence of details from the rape of a young woman in Steubenville, Ohio, material so sickening that it almost—almost—beggars belief. Can a group of young white men truly be so completely at home in their own sense of entitlement that they not only see an unconscious underage girl as their plaything, but whip out a cellphone camera and perform their own prosecuting evidence as if they were doing comedy improv? The answer is a gruesome Yes, largely because these “men” are secure that a power structure exists around them, one that will do whatever it can to insulate them from any culpability or even recognition of wrongdoing. If we hadn’t seen it ourselves, our 2013 minds would refuse to process it; we are living in a jungle of patriarchy.

I fear that bringing this real-world heinousness into a discussion of fictional material may edge toward insensitivity. However, from its very opening episode, Top of the Lake, produced and co-directed by Jane Campion and Australian TV vet Garth Davis, presents an isolated New Zealand backwater that, purely in terms of textual construction and tone, seems almost like an allegory for a war between the sexes, if not one woman’s paranoid projection of all-enveloping male control. The community of Laketop is a universe in which men do as they please, the police look the other way (when they are not openly complicit), criminality and violence simply comprise the public sphere, and women understand that they must either make nice or suffer untold misery and humiliation.

Top of the Lake’s misogynist atmosphere is so flagrant that Campion essentially inscribes it onto the landscape. Not only is the lake itself a cold, deep gaping wound at the heart of the town—a vaguely feminine symbol which strikes fear and awe in most of the characters, who will navigate it with their yachts but insist that “no one can survive in that water”—but, surrounded as it is by high hills and thickets of uncleared Outback, it is also the area’s ultimate proving ground, a place where dominant men assert their will, make lesser men “disappear,” and still others hide away completely. In town, it’s all close-ups and medium shots, evenly lit and carefully organized. But the surrounding nature of Laketop serves as a kind of battery for the unconscious, a womblike Lacanian Real where patriarchs recharge their hatred of women and one another. We frequently see these hills in long shot, tiny cars and dwarfed figures moving through a landscape that will swallow them in time.

The battle lines of the sexes are embodied in characters and the land, far more successfully than in the narrative itself. The seven-part series is driven by the sudden pregnancy and subsequent disappearance of twelve-year-old Tui Mitcham (Jacqueline Joe), daughter of local strongman/drug kingpin Matt Mitcham (Peter Mullan). Given the fact that the entire local police force is male, the detective in charge of the case, Al Parker (David Wenham), decides to call in Robin Griffin (Elisabeth Moss), an investigator who grew up in Laketop and is in town visiting her dying mother (Robyn Nevin). We learn that Robin left town shortly after having been gang-raped on her prom night; she was out with Matt’s son Johnno (Thomas M. Wright), who witnessed the rape but was too weak to stop it. Upon returning to town, Robin tentatively resumes her troubled relationship with Johnno; better him, one supposes, than his macho brothers Luke and Mark. (That’s right: Matt’s sons are Mark, Luke and John, and patriarchy is indeed gospel at Laketop.) 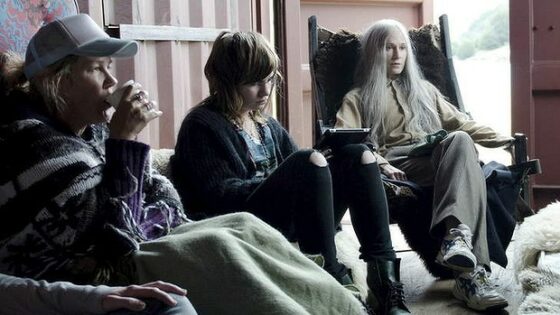 In what is probably Top of the Lake’s boldest narrative and stylistic move, it includes an honest-to-goodness female (if not feminist) separatist community in the form of Paradise, a collection of modified shipping containers on the edge of the lake where a group of women seeking refuge from various troubles have set up camp, seeking guidance from a teacher of sorts called GJ (Holly Hunter, whose long grey hair and severe gaze makes her resemble Campion herself). GJ functions as a kind of New Age Dr. Laura Schlessinger, mostly berating the women seeking her advice, and offering little aside from platitudes regarding “the wisdom of the body.” Of the women in GJ’s camp, one deals with her sexual addiction by going into the bar in town and offering any of the guys there $100 to fuck her. Another of the women takes up with Matt himself, who is very loving until the Ecstasy wears off, at which point he almost runs her down with his truck. Even Robin, our putative heroine, enjoys a liaison with Johnno that could be characterized as at least somewhat destructive. (At mid-series, she wonders just how innocent he was on that fateful night.)

So how “wise” are these bodies, exactly? In light of these women’s questionable choices, we can perhaps discern in Top of the Lake Campion’s rather unusual angle on contemporary feminism. In this pathologically phallocentric universe, the men are undoubtedly bullies and perpetrators, and they enjoy full rein of their privilege. However, the women are shown to be so thoroughly traumatized as to capitulate with their abusers in a kind of master-slave dialectic.

This is where Top of the Lake departs from a real-life example like Steubenville, where the victim has no part to play in her own abuse. As a work of art, the program can and should be able to theorize about human psychology, and how those of us in radically limited circumstances will inevitably identify, at least in part, with those who oppress us. This is one of Campion’s consistent concerns as a feminist artist, something she has explored not only in her most acclaimed film, The Piano (1993), but also in Holy Smoke (1999) and In the Cut (2003), films that I find much more compelling precisely because their exploration of this dialectic is far messier and more emotionally reckless. (In fact—and this is actually something that has never occurred to me before now—the mutually assured destruction of the sexes as an ontological problem is a thematic that Campion shares, from a considerably different angle, with Lars von Trier.)

By comparison with Campion’s film work, however, Top of the Lake brings these issues to the fore only to wrap them up in frustratingly pat ways. One of the reasons I was keen to review Top of the Lake was that I wanted to see how it matched up against other recent auteurist TV/cinema hybrids, such as Olivier Assayas’ Carlos (2010) and Todd Haynes’ Mildred Pierce (2011). As it happens, Top of the Lake has much more in common with last year’s disappointing Kurosawa Kiyoshi miniseries Penance, a TV project through and through. Like Penance, Top of the Lake finds a major artist getting bogged down in genre rules, hurried plotting and clumsy editing.

But even more damagingly, Campion rolls out not only a narrative idea but a worldview—male dominance as a toxic force, strangling the world like kudzu in a garden—and sacrifices that vision to off-the-rails plot twists, character contrivance, and convenient episode-seven mopping up. This is a crying shame, as Top of the Lake’s initial episodes were fascinating precisely because they were tonally awkward and inconsistent. The world of Laketop was so openly hateful to the female sex that it hovered somewhere between documentary and science fiction, and in so doing reflected a fundamental crisis of our times. By the end, the show contents itself with fashionable cynicism, and that’s not enough. There’s way too much on the line.