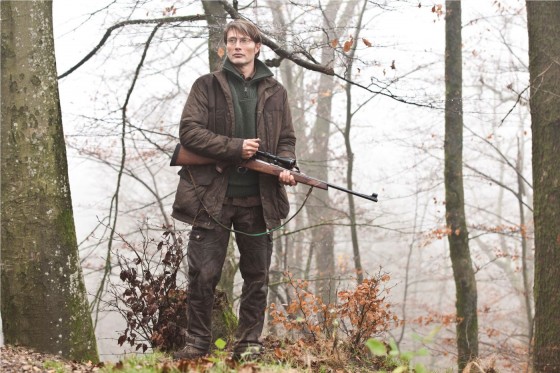 “You can be a one-hit wonder, so long as you make it count.” A film programmer friend of mine made this remark a few years back, regarding a particular avant-garde filmmaker who has essentially been dining out on a particular canonical entry for the past twenty-some-odd years. It’s true, no one much minds, simply because that single film is so sui generis and so universally beloved; we can’t imagine our lives without it. I bring up this anecdote here by way of raising what seems to me to be a vital question: Is Thomas Vinterberg’s 1998 film Festen (a.k.a. The Celebration) another such indispensible film?

We sometimes forget that Festen wasn’t Vinterberg’s debut feature. That honor goes to 1996’s The Biggest Heroes, a film that didn’t travel very far out of Europe but was nevertheless filled to the brim with many of the luminaries—Ulrich Thomsen, Paprika Steen, Trine Dyrholm, Thomas Bo Larsen—who would define Danish cinema for the next seventeen years. Of course, one of the things Festen had going for it that its predecessor did not was its status as the first official Dogme film, and reiterating everything that entails (the promotional hoopla, of course, but also the undeniable formal freshness and verve) hardly seems necessary.

In its own way, Festen cannot and should not be denied. It is a deft piece of Strindbergian Freudianism, but retooled for late-century middlebrow understanding in the age of TV confessional and overly pointed, explanatory dialogue. If it were a comedy, Festen’s brusque directness would seem like satire or political revue, but as a serious attempt at bourgeois scab-picking, it arranges itself a little too neatly. Return of the prodigal, upstairs/downstairs machinations, and the synecdoche of an elite class in one thick carbuncle of a paterfamilias—Vinterberg’s smug classical diagrams always show through.

Nevertheless, the formal innovations of the Dogme style are not to be taken lightly. Simply the tremulous early-video “grain” and unpredictable movements of Anthony Dod Mantle’s cinematography electrify Vinterberg’s staid scenario, ducking and weaving with it as if with hands at a potter’s wheel. These days it’s hard to see just what was so genuinely bracing about the key Dogme films (Festen, Lars von Trier’s The Idiots [1998], Søren Kragh-Jacobsen’s Mifune’s Last Song and Harmony Korine’s julien donkey-boy [both 1999]), of course, because their language has been absorbed into contemporary filmmaking to the point of degradation.

But the bottom line, as far as Vinterberg goes, is this: the formal innovations of Dogme served to infuse the conservative attitude of Festen with radical swagger. A film divided against itself, Festen is still a major work. At the same time, much of what made it so was derived collectively (from Mantle, “the Brothers” of Dogme, and from a particular historical moment in Danish cinema), and should probably not be attributed to Vinterberg’s status as some kind of visionary artist. Like him or not, one filmmaker emerged from this unique moment with a truly singular voice (probably because he entered the Dogme collective already in possession of one), and it wasn’t Thomas Vinterberg.

But the contemporary film scene is a funny thing. Unlike his compatriot Kragh-Jacobsen, who has slipped into making Danish TV, or Dogme brother Kristian Levring, who has managed a scant two features since his debut (neither of them very good), Vinterberg keeps on producing. Several of his films have been high-profile projects, the most notable one probably being his 2003 fiasco It’s All About Love. A big-budget Europudding studio vehicle starring Joaquin Phoenix and Claire Danes (with disconnected Greek-chorus drop-ins from Sean Penn), this maniacal whatsit about a Russian skating champion, a global conspiracy, and the dissipation of gravity over Uganda, was deemed unreleasable by Focus Features and auctioned off for scrap. If ever there were a movie I and many others were pre-programmed to adore, it was this one. (And some folks did like it when Richard Kelly tightened it up, added much-needed humour, and remade it as Southland Tales [2006].) But Love, sad to say, really is a total disaster, mostly because Vinterberg has no real artistic sensibility to yoke it all together. You’d expect that a film this unhinged would be the result (for good or ill) of an egomaniacal auteur giving free rein to his flights of fancy. But instead, the whole thing is just sad and dull, like someone was trying to make a tuna casserole and accidentally blew up the house.

As a kind of transitional work, Vinterberg offered Dear Wendy (2004), a highly stylized yet intimate treatise on pacifist gun nuts. Taken from an original script by von Trier, the film, with its stagy sets and declamatory dialogue regarding the Roots of American Violence or what have you, feels quite a bit like a rough draft for some sort of interlude in Dogville (2003) or Manderlay (2005). Another failure, to be sure, but at the very least an interesting one, Wendy finds Vinterberg casting about, trying to suss out his talents. Am I a realist? A mannerist? Do I articulate social problems through abstraction? Or (as in von Trier), are social problems themselves mere occasions for modernist experimentation? Vinterberg’s 2007 comedy When a Man Comes Home offered no real answer, but the tedious Submarino (2010) indicates that he has found his niche in the same sanctimonious dramaturgy that characterized Festen, but with the added macho anguish that made Susanne Bier’s Brothers (2004) such a hit with the furrowed-brow set.

How many semi-comebacks does Vinterberg get? His latest, The Hunt, opened in Competition last year at Cannes, and more than any film since Festen it has put its maker high in the mix of top-flight international auteurs. I suppose it stands to reason that Vinterberg would come full circle. Festen was about the revelation of incest coming to light—a secret no one wanted to believe until the evidence was incontrovertible—and The Hunt is about an honorable man falsely accused of child molestation, the result of a child’s offhanded remark to which a hysterical community is all too ready to lend absolute credence. The titles also parallel one another: the “celebration” is the patriarch’s highly public birthday party which becomes an Independence Day for the new generation; the “hunt” is a men’s wild game-shooting expedition that soon turns on one of its own. The good man pleading for change vs. the good man victimized by the mob. What’s more, even outside the narrow confines of Vinterberg’s oeuvre, the two films mirror shifting cultural priorities: Festen, for all its faults, demanded justice and public atonement for sexual violence, whereas The Hunt is chiefly concerned with defending men from an overprotective victim culture.

The Hunt is the story of Lucas (Mads Mikkelsen), an elementary school teacher and divorced father who is just beginning to grow accustomed to life on his own. He quarrels with his ex over custody of his beloved teenage son Marcus (Lasse Fogelstrøm), begins dating a kind, attractive Russian co-worker (Alexandra Rapaport), and despite the fact that he is the lone male in the school setting (and in an overwhelmingly female-dominated profession at that), everybody likes and respects him. That is until Klara (Annika Wedderkopp), the prepubescent daughter of his two best friends, tries to give him a kiss on the mouth. “No,” Lucas tells her sternly. “You only kiss Mommy and Daddy like that.” Embarrassed, Klara tells another teacher that Lucas tried to touch her. And the ball starts rolling from there.

The fact that anyone is taking The Hunt seriously as a look at community panic around pedophilia, or the mass psychology of scapegoating, or even as a solid slice of middlebrow realism, is truly confounding. The problem, as has been the case throughout Vinterberg’s entire career, is that he has no directorial control, and this results in wild tonal inconsistency. Is The Hunt supposed to be some kind of highly artificial bell-jar, such that the patently absurd plot contrivances that shuttle Lucas off like a pig waddling down a blind chute to the slaughter are intended to be seen by those of us stationed outside the diegesis? My esteemed colleague Robert Koehler, who admires this film, likens it to Ibsen in this regard. But then, how can we square The Hunt’s deeply etched expressionist ley lines with the overall naturalism in its performances, or the fact that, dank hunting lodge aside, most of the film exhibits a rather transparent approach to camerawork and editing?

In light of this, it becomes difficult to treat Vinterberg and Tobias Lindholm’s rickety script as an up-is-down experiment in Brechtian gear-grinding. When a relatively reasonable character like Lucas’ principal Grete (Susse Wold) abandons her senses and allows Klara to be patently manipulated by a creepy child psychologist—who, without Klara’s parents present, asks leading and frankly perverted questions with no scientific controls to guard against “false positive” responses from the child—we are outside the realm of responsible realism. When Grete can only feebly offer, “I believe the children,” then Vinterberg’s script is designed to turn Lucas into a helpless victim, over and above any genuine concern for the social problems of both pedophilia and the concomitant conservative mob mentality it can actually engender. Likewise, when Klara tells her mom (Anne Louise Hassing) that she lied about being fondled by Lucas, she conveniently ignores her own child, telling her, “You are blocking it out.” In Vinterberg’s universe, the desire to punish a potential molester obliterates even a loving parent’s concern for the young victim’s emotional health and ability to be heard. This is an artificial dystopia, but one from which we are clearly intended to take invaluable lessons about the treatment of the honourable adult white men in our midst.

Whatever faults there are with The Hunt (and there are indeed many), they are not to be found with its lead actor. Mikkelsen, who has spent the better part of this year reclaiming the Hannibal Lecter character from cultural self-parody, embodies Lucas with just the right combination of indignation, uncertainty, and baseline concern for the true innocents in his charge (Klara and Marcus), his frustration peaking as he becomes unable to keep his loved ones safe from the brutish mob. Mikkelsen’s Lucas is a man, not a symbol, which makes Vinterberg’s writerly and directorial failures all the more galling.

In the end, once Lucas is properly vindicated (more by a defiant assertion of self than by any clear refutation of Klara’s accusation, but whatever), we witness the final scene, which is the absolute inversion of Festen. Lucas, his ex-wife, and the entire community are present for the induction of Marcus as a full member of the hunting lodge. Whereas the son in the earlier movie exposed the father’s sins in order to irreparably tear the fabric of patriarchy asunder, here the father, restored as a healthy and proper man, brings his own son into the masculinist fold. This is accomplished, of course, by blood sacrifice: Marcus is supposed to shoot something in the woods, preferably something they can eat.

The “twist ending,” I guess, of The Hunt is that Lucas hears a gunshot and ducks. He will never feel 100% secure in the patriarchal winner’s circle, certain that he won’t be the sacrificial offering once again. But he really oughtn’t worry. Back in 1998, the Brothers of Dogme gave up their names (The director must not be credited), their means of stability (The camera must be hand-held), and even the past and the future (The film takes place in the here and now). And yet, to this day, white men are still far more likely to turn their guns outward than to eat one of their own.