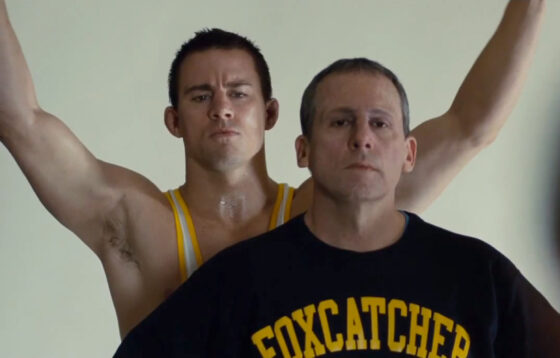 Early on in Foxcatcher, the eccentric and bottomlessly deep-pocketed John du Pont (Steve Carell), heir to an American munitions dynasty and a collector of expensive military gadgets, expresses his frustration about the indifference afforded to young men who’ve served their country overseas. That the veteran in question is a wrestler rather than a military man doesn’t diminish du Pont’s sense of reactionary patriotism, and it’s one of the film’s sharper points that it hints that he might just be on to something. Before he’s summoned by du Pont to be his protégé on a palatial Pennsylvania horse ranch, grappler Mark Schultz (Channing Tatum) is shown eking out a marginal existence in the wake of his gold medal-winning performance at the 1984 Los Angeles Olympics and his subsequent victory in the World Championships over the Eastern bloc countries that had boycotted the L.A. Games. Arriving in full red-and-white regalia to give inarticulately jingoistic pep talks to elementary school children, he looks every inch the forgotten soldier, a man who earnestly covers himself in the glory he isn’t afforded by others.

As one of the only mainstream movies to directly address the politics of amateur sports—“amateur” here a slippery designation that barely separates the pursuit of athletic excellence from the machinations of free-market capitalism—Foxcatcher is both notable and welcome. The meeting between du Pont and Schultz is not only the catalyst for the film’s based-on-fact narrative, but also a vivid visualization of the disparity between physical and economic strength, and how the latter permits a troll to wholly lord it over a titan. Co-screenwriter Dan Futterman was also one of the authors of Capote (2005), the film which announced the arrival of previously unheralded director Bennett Miller as a major prestige-picture player, and Foxcatcher could be seen as that film’s spiritual sequel: a true-crime thriller about the charged collision between very different modes of masculinity.

One could see in Carell’s putty-schnozzed du Pont a weird mutant hybrid of Philip Seymour Hoffman’s Capote and Brad Pitt’s Billy Beane from Miller’s previous film Moneyball (2011): a jock-at-heart who lacks the physical gifts to pursue his love of wrestling, so styles himself as a flamboyant (and then megalomaniacal) behind-the-scenes strategist. Glomming on to the sullen and skint Schultz as the son he never had, du Pont soon becomes creepily desirous and possessive, in accordance with his family’s history as breeders of competition thoroughbreds. Miller plays up the wrestlers-as-livestock angle in cleverly staged and composed shots: du Pont arriving at his charge’s chalet in the middle of the night in a tuxedo, pointedly contrasted with the younger man’s resplendent, beefy nakedness; Mark greeting his older brother and fellow Olympic champion David (Mark Ruffalo) behind a swinging, saloon-style door that gives the impression of a stable housing expensive pets.

Tatum is impressive here as a kept man whose ropey muscles can’t bear the weight of his patron’s expectations, nor the lacerating marks of his cruelty. Du Pont’s selection of Schultz as the flesh-and-blood avatar of his sporting fantasies proves disastrous not because the younger man isn’t up to the task, but because du Pont keeps rewriting the role-play dynamic so quickly that the wrestler, for all his cardio training, can’t keep up: after encouraging Mark to snort cocaine (the resulting trip-out evoking Tatum’s drug-addled glory in 21 Jump Street), du Pont later reams him out for being out of shape. At times, the scenario feels like a same-sex gloss on Lolita, with du Pont as a kind of Humbert Humbert figure, at once untouchably above and in pathetic thrall to his pet project, with Carell splitting the difference between James Mason’s lugubriousness and Peter Sellers’ uncanny mania.

On that point, the seriocomically-inclined Sellers is an apt comparison for Carell’s widely lauded yet essentially wobbly turn here. Where the chameleonic Sellers could be truly unsettling and repulsive on screen, Carell acts exactly like what he is: a beloved comedian trying on a serious role. While there’s a lot of technical skill on display (du Pont’s voice keeps squeaking out in a congested whisper), the illusion isn’t totally convincing. At the other end of the spectrum, Ruffalo is so persuasive as the elder Schultz that it’s positively spooky. Never an especially physically commanding actor—he’s good at playing guys who are self-effacing, soft around the middle, or whose inner beast can only be conveyed via hulking CGI beasties—in Foxcatcher Ruffalo transforms himself into a centred, powerful man whose confidence in his own abilities is so relaxed and unassuming that it’s no wonder du Pont hates him on sight. In the film’s most entrancing scene, David leads Mark through a series of warm-up exercises that entail continued full-body contact, and the imagery goes beyond balletic: in the chill silence of the empty gymnasium, they look for all the world like twins conjoined in the womb.

Leaving aside his Cannes prize for mise en scène, Miller isn’t exactly a director with an arsenal of visual strategies: he’s into grey, underlit interiors and languid but still conventional continuity editing, and that’s about it. But he hits paydirt with in this gently elongated and elegantly choreographed pas de deux, which instantly establishes both the connection and the competitiveness between the Schultzes. It also sets up a later scene where du Pont forces Mark into a submissive position and clameors all over his prime-cut body in a dark room with a group of family portraits frowning down on the action—a far creepier pas de deux that threatens to explode the film’s subtle homoeroticism into something far more explicit.

Ultimately, however, it doesn’t. Like Mark Schultz (and, for that matter, John du Pont), Foxcatcher is a movie that does its best to hold things in. “Subtle” isn’t the right word for what Miller and his collaborators are doing here. They nudge the audience early and often to pick up on fine-print subtext—as when du Pont can’t quite meet his imperious mother’s (Vanessa Redgrave) gaze when he tells her about his wrestling-team endeavour (“It’s a low sport,” she hisses, class bias and sexual judgment rolled up into one)—or sometimes go in for an all-out shove, as in the literally rampaging symbolism of the scene where the depressed billionaire sets a group of valuable racehorses free. And yet there’s a sense of restraint to Foxcatcher that’s impressive, and not just in comparison to the sorts of films that get released during awards season. When David, now also in du Pont’s employ, sits to record a testimony for an (in-house) video testifying to his employer’s greatness, the impression is of a man who knows exactly what’s wrong with the person in question—and with his own decision to work with him—but can’t just come out and say it; instead of speaking up, he shuts down.

David’s evident but clenched disgust in himself and his situation is affecting and ominous: it indicates that this proud Olympian has gotten himself trapped in the sort of pinning combination that even his greatest opponents couldn’t have attempted. It turns this otherwise bright and gregarious man into a momentary mirror of his younger brother, whose own trance-like introversion—initially readable as a sign of intense athletic focus—suggests a man broken well before his time. Of course, du Pont’s ultimate victory over the previously undefeated Schultz brothers is a pyrrhic one: it’s also a literal and figurative murder-suicide pact between two very different American dynasties, one of which is ghoulishly resurrected, like some hulking Midwestern golem, in the final scene. (Actually, everyone in this last sequence is a sort of zombie, a cheap point emphasized by the sound design.) In accordance with the real-life death it describes, Foxcatcher is finally a funereal film, tastefully arrayed by a team of gifted morticians. Whether one finds it more morbid than mournful is another matter.