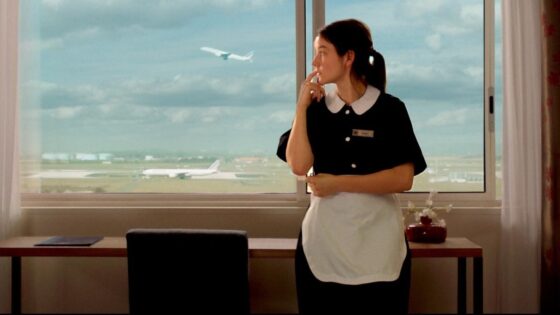 A film seemingly made to be screened at film festivals, where its scenes of characters logging into hotel wi-fi on their laptops and thrashing around in the throes of jetlag will pack an affective punch (for journalists, at least), Bird People has divided critics as neatly as its own bifurcated, his-and-hers narrative. Set almost entirely within the confines of a Parisian Airport Hilton, Pascale Ferran’s follow-up to her estimable 2008 adaptation of Lady Chatterley pays roughly equal attention to its two protagonists, an American guest (Josh Charles) and a French maid (Anaïs Demoustier). The Yankee businessman, who is in Paris to take a meeting about a globo-corporate construction project in Dubai, suffers a paralyzing emotional crisis and, after a restless night in his luxury suite, decides to skip his flight home. The fallout of this seemingly impulsive decision reveals a longer-standing desire to flee from every aspect of his work and life (details revealed through a series of phone and Skype calls to people back in America). As for the maid, she’s frustrated with rifling through the refuse of other peoples’ lives, and inwardly wishes for a change of pace. She gets it in short order, and her section succeeds in transforming the bluntly metaphorical title of Ferran’s film into a (ridiculously) literal proposition. Spoiler alert: Demoustier transforms into a sparrow and flies around the interior and exterior of her workplace, becoming a kind of liberated voyeur whose uninhibited mobility mirrors the American’s passionate yet inchoate desire for escape.

It’s this stretch of avian whimsy—constructed out of adroit but hardly remarkable airborne point-of-view shots that suggest Pazuzu dans la metro—that has created the love-it/hate-it buzz around the movie. And, since I don’t think Ferran’s late flight of fancy works at all (and gets far too cute to boot), I guess I have to put down stakes in the second camp. But the film’s first half is problematic too, especially when juxtaposed with another movie making its regional premiere here in Karlovy Vary, Steven Knight’s Locke. This very fine drama, which has already come and gone in commercial cinemas in North America and the UK, is also about a man who suddenly decides to upend his professional and domestic routine, and, like Charles’ businessman, he’s upbraided for it mainly by telephone. Also, like Bird People’s magic realist second half, Locke is very much a gimmick film, confining its action entirely to the car (and even then, really just the front seat) being driven by Tom Hardy’s construction foreman Ivan Locke, and relegating the other characters to disembodied voices on a dashboard-controlled speakerphone. (These performances have been criticized, but I’d say Chris O’Dowd’s purely verbal turn as a boozy concrete farmer is the best work of his career.) The two films’ gambits are inversely metaphysical—untethered movement in Bird People versus claustrophobic confinement in Locke—but it’s Knight’s film that goes further, getting much better mileage to the gimmicky gallon.

“I am the father” is Locke’s main mantra as he speeds down the M6 towards a London hospital where his illegitimate son is about to be born; he needs to identify himself as such to the hospital’s staff, who anticipate his arrival but are confused as to the exact nature of his relationship with the mother. Ivan is somewhat confused as well: the woman is a one-night stand whom he has no feelings for, and yet he’s prepared to risk all of the things he’s driving away from—chiefly a massive construction project and his wife and two sons—in order to be by her side during the delivery, an obsessive yearning that is eventually revealed to be tied to the character’s own daddy issues. As attested to by Dirty Pretty Things (2002) and Eastern Promises (2007), Knight is not exactly a subtle writer, and as with his scripts for those earlier films, Locke unfolds as a series of revelations—of blanks filled in efficiently and on schedule, in escalating order of importance as its protagonist draws closer and closer to his goal. Ivan works with concrete and precisely timed delivery schedules, and so does Knight: the writing is schematic in the extreme, laying down a solid, heavy foundation and piling on enough complications (and conversations) to give the impression that its protagonist’s world is being violently rocked from side to side.

That imbalance is an illusion, but it’s a wholly convincing one due to Hardy’s spectacular performance, a scrupulously controlled display of a talent barely hinted at in his previous marquee roles. In Bronson (2008) and The Dark Knight Rises (2012),there was a sideshow-attraction quality to Hardy’s performances—partially due to his carnival performer’s physique, but also because of his willingness and ability to stylize his body and voice into swollen, showboating caricature. Yet while Ivan Locke and his Midlands lilt are no less a put-on for Hardy than his voice-distorted Bane, he’s captured the core of a real person here. Through a magnificent technical acting skill that is his nation’s hallmark (I thought of John Hurt and Anthony Hopkins, especially the latter’s clipped line deliveries), Hardy makes it seem as if Knight’s hyper-articulate dialogue is coming straight from his character’s furiously racing brain rather than merely being placed in his mouth. Shot almost entirely in close-ups and from the neck up, rarely out of frame and reflected in mirrors and windshields in the rare moments that he’s not speaking, Hardy is the entire movie, and he tears into the task with the appetite of a lean up-and-comer rather than the self-satisfaction of a grandstanding movie star.

It’s the combination of sturdy writing and protean acting that puts Locke over the top, and allows it to transcend the clutter of the camera direction, which, though impressive on a certain level (watch carefully and see that Knight has matched the successive shots of passing lights and highway signs), but also routinely distracting. It’s as if Knight, having gifted Hardy with a great starring role, is vying for centre-of-attention status right along with him. Ivan’s determination to simultaneously remotely complete his record-breaking concrete pour and to justify himself without excuses to his wife—who is not mollified by his insistence that he only cheated on her once, replying that “The difference between once and never is everything”—has more than a touch of madness about it, but it’s also heroic, in a massively arrogant sort of way. Refreshingly, there’s no suggestion whatsoever that we’re watching an “everyman” here, but rather a highly unique individual whose intelligence and resolve are liabilities when applied in the wrong direction. At the same time, though, Knight and Hardy never even hint that they’re making a movie about somebody receiving some existential comeuppance: Ivan’s situation is self-directed, and so are the different ways he finds out of it, the exit ramps and dead ends both.

Compare this to the scenes in Bird People where Charles’ Gary Newman (is the name an homage to the composer of “Are Friends Electric?”) sets his jaw and delivers the bad news to his co-workers and wife (Radha Mitchell), and you see the difference not only between a movie that’s wholly committed to its neo-radio-play format and one that uses it more strategically, but also a script that dares to actually dramatize its situation and one that keeps things safely vague. In the worst moment of the first half of Bird People, a narrator (Mathieu Amalric) chimes in to prep us for Gary’s life-changing decision—a shockingly lazy storytelling device that doesn’t pay off with repeated usage. In fact, considering that Bird People begins by vocalizing the interior (or cell-phone-typed) thoughts of an entire subway train’s worth of Parisians, it seems odd that Ferran wouldn’t grant us similar access to her character’s inner life. Not that Gary’s reasoning is all that compelling when he finally verbalizes it: it’s fine to make a movie about somebody who’s confused by his impulses, but his panic doesn’t feel particular. It’s more about reinforcing the film’s overall themes of flight, and while Ferran doesn’t necessarily affirm the urge for escape, there’s something sentimental about the conclusion to Gary’s narrative, which meets him more than halfway on his stated intention to walk away from his wife and children without sweating the consequences.

Locke,meanwhile, is all consequences. Its illustration of the tension between an individual’s moral determination and its effect on the people who rely on him is tough, fair and humane. “This morning, I had a job, a wife and my children,” muses Ivan towards the end. “Now all I have is this phone, and this car.” It’s a writerly line, but it’s also moving—it confirms Knight’s philosophy of life as forward motion, with no turning back. Where Locke keeps its eyes on the road, Bird People chirps merrily andfloats up into the ether.