By Adam Nayman In CS69, Currency 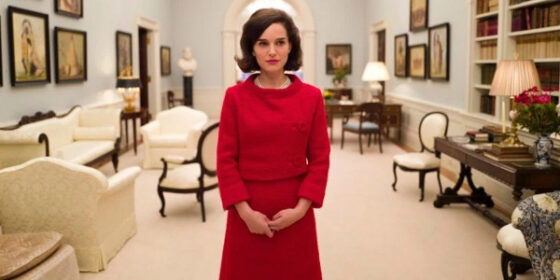 In In the Line of Fire (1993), John Malkovich’s crack-shot-slash-crackpot gets off a wickedly funny line about JFK, gloating that the 35th Commander-in-Chief’s favourite poem was Alan Seeger’s “I Have a Rendezvous with Death,” which, he adds, “is not a good poem.” It’s a bad-taste joke touching on the verboten notion that one of the 20th century’s most famous faces had bad taste, designed to get the goat of the “New Frontier generation” (embodied in the film by no less than Clint Eastwood) and those who’ve grown up in its shadow. If this would-be presidential assassin were truly ruthless, though, he’d add that Alan Jay Lerner and Frederick Loewe’s Camelot—an even more famous Kennedy family favourite—is not a good musical. Or, in the words of Noël Coward, who attended its first ever performance at the O’Keefe Centre in Toronto in 1960: “It’s longer than the Götterdämmerung…and not nearly as funny!”

You get to hear a whole lot of Camelot in Jackie, which is neither long (90 minutes) nor funny (for even a minute) and arrives just in time to capitalize on both Oscar and election seasons. If there’s one thing that might assuage mounting urban-liberal anxieties in the aftermath of a genuine political disaster, it’s going to the movies—particularly one that remembers a time when a superior class of celebrity-striving spouse occupied the White House. Originally conceived as an HBO miniseries by screenwriter Noah Oppenheim, whose resume includes credits as a senior producer of The Today Show and co-creator of Mad Money as well as several scripts for terrible movies derived from post-apocalyptic YA fiction, Jackie was supposed to star Rachel Weisz and be directed by Darren Aronofsky. It was then circled by Steven Spielberg before jury member Aronofsky saw The Club at the 2015 Berlinale and sagely decided that whomever was responsible was the perfect candidate. Enter one Pablo Larraín, whose long-standing commitment to scrutinizing his homeland’s hypocrisies through a smeary DV microscope could be put on hold for the chance to work with Ms. Black Swan herself.

Jackie betrays those scars and then some: it suggests nothing so much as a half-season’s worth of Quality TV stripped down, squeezed together, and then carefully retouched with art-cinema make-up for just the right haunted, lifelike look. Having displayed a fascination for cadavers in Post Mortem (2010), which featured an on-the-slab cameo from Salvador Allende, Larraín shows new craftiness by mostly using Kennedy’s corpse as a structuring absence, always under wraps or just out of frame as the eponymous heroine tries to hold herself together in the two-day period between his death and his funeral. But Larraín’s visceral instincts haven’t abandoned him entirely. When it’s finally time to stage JFK’s rendezvous with death, we get the inevitable, would-be unshakable image: purple-grey brains staining the First Lady’s resplendent pink Chanel suit.

If Jackie has a conceptual emblem, this is it: messy reality splattering all over a carefully maintained façade. The film offers a series of variations on this theme, and on the relationship between its heroine’s graceful public performances and her churning, inscrutable private emotions. Much of the film’s early acclaim derives from the idea that this dialectic is somehow novel, when it’s nothing that you can’t find on Netflix’s The Crown, for instance, or in, say, The Queen (2006). Larraín’s dubious achievement is to play a sort of formal shell game with the material, defamiliarizing the period setting and costumes through degraded image formats; shooting frequently in intense, screen-filling close-ups that displace our sense of space and scale; and drenching the proceedings in incongruously swooping music by Micah Levi, the go-to composer for a tone of free-floating unease. (Every time the main motif drops in, it sounds like the beginning of Michael Jackson’s “Give Into Me.”)

Some of these these moves are familiar from Larraín’s work in The Club and No (2012), both of which exploited the shallowness and ugliness of digital video (though only the latter utilized it thematically). Jackie is more obviously virtuosic than its predecessors, which is telling both of its director’s Hollywood crossover ambitions and, on some level, his recognition that he doesn’t have much to work with. So, like the cynical—but of course, righteously minded—anti-Pinochet admen in No, he hawks Oppenheim’s meagre dramatic and philosophical conceits for all they’re worth.

Everything about Jackie is calibrated to give the impression of a complex, multi-levelled portrait, and the strain shows at all times. Oppenheim and Larraín give us no fewer than three framing devices: a 1961 television broadcast featuring Jackie (Natalie Portman) magnanimously walking a camera crew through the White House; a 1964 interview in Hyannis Port between the widow in seclusion and a (fictional) journalist played by Billy Crudup; and an invented tête-à-tête between Jackie and a priest (John Hurt), all of which are interspersed with scenes set during and after JFK’s assassination and leading to his funeral. But it’s really a single-minded screenplay, and its one central, recurring idea is that the iconic image of Jacqueline Kennedy that has endured in the popular imagination—stoic, regal, beautiful, put-upon—doesn’t tell the whole story: that this particular picture is worth a thousand words left unsaid.

It’s true enough that these glancing glimpses of Jackie—whether scheming behind the scenes to engineer JFK’s funeral as a national spectacle of mourning, clashing acidly with her handlers, or stumbling around in a stupour while listening to the cast recording of Camelot—comprise an “unsentimental” approach (to quote one admiring pull-quote critic). But are we truly supposed to ooh and aah at the revelation that a woman who spent her life in the public eye was skilled at withholding and manipulating perception, or that the Kennedys’ version of Camelot was a cynical, stage-managed illusion? These are less genuine, hard-won insights into the old personal-political dichotomy than common-sense givens, and rather hard to take seriously when we also have to watch Portman and Peter Sarsgaard (well-cast but cartoony as Robert Kennedy) exchange dialogue about how JFK’s death is going to change everything to come: “Civil rights, the space race…Vietnam.” This is not the way that grieving people talk: this is how a screenwriter privileges his own 20/20 hindsight and flatters what he believes is his audience’s lazy and fully received sense of history. Jackie is a movie that insists on the expedient falsity of grand cultural narratives even as it regurgitates them, half-chewed, all over the place.

To give credit where it’s due, Portman’s impersonation of Jackie resonates with an authentic sort of phoniness, and there are worse ideas than casting a congenitally mannered actress to play an outsized celebrity figure. If Jackie holds together at all, it’s because of its star’s steadying presence amidst all the whirling, moving parts. Yet even Portman’s best moments are undermined by the filmmaking, like when the genuinely moving play of emotions on her face as she considers the priest’s advice about living her shattered life one day at a time is followed by sub-Malickian imagery of the First Mom at play with her children against a magic-hour backdrop. By this point, it’s clear that Larraín is more savvy than truly imaginative; he has a real filmmaker’s instinct for choices that work, which is to say that he’ll embrace clichés when they suit his purposes. And even when it seems like he’s working outside or beyond our expectations, he’s really just fulfilling them, whether it’s in Portman’s flinty interplay with Crudup’s nameless interlocutor—a clearly demarcated stand-in for our simple, voyeuristic curiosity—the banal symbolism of Jackie spying a storefront mannequin decked out in reproductions of her duds, or the aforementioned close-up of her husband’s exposed brainpan, which pokes a hole in all that measured faux-austerity.

This grim bit of exploitation recalls Antonio Campos’ Christine, which is similarly built around a climactic money-shot-slash-headshot, albeit one far less entrenched in collective memory. And both of these unrewardingly accomplished movies conclude with cheap shots in the form of soundtrack cues. If Larraín’s fade-out reprise of “Camelot” is less offensive than Campos’ deployment of The Mary Tyler Moore Show theme to ironically eulogize Christine Chubbuck, it’s also not appreciably more profound in the final analysis. As Richard Burton’s Arthur purrs lyrics about “one brief shining moment” over shots of Jack and Jackie sanguinely dancing the night away, we’re supposed to feel caught between knowingness and nostalgia, but the irony is so soft and pale and flabby that you could cut it with a dinner knife. More like Spamalot, if you ask me.

Exploded View: Gary Beydler’s Mirror From the Other Side: Exiled in Trumpland