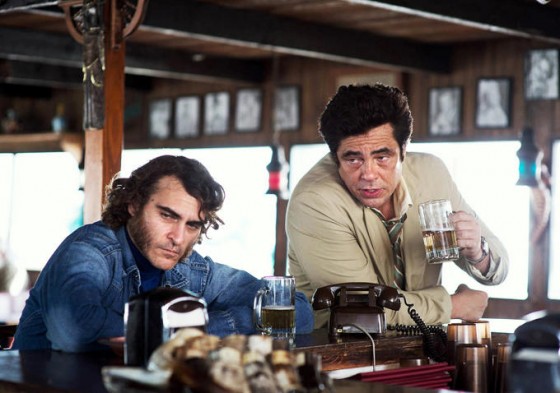 First we see the ocean—again. Before introducing us to the hazy, neon-stroked nocturne with which Pynchon chose to open his “lite” novel, Inherent Vice—wherein Shasta materializes from a back alley to offer a fateful proposition to ex-boyfriend Larry “Doc” Sportello—Paul Thomas Anderson presents a blip of a prologue to begin his adaptation. An image of an alley, first in long shot, then a jump cut zooms us closer. The lax verticals of neighbouring beach huts and the ceiling of a peach, twilight sky frame the silvery black beach, recalling perhaps a certain late-’60s meta-narrative zoom into the depths of aquatic flatness, but also the initial image of Anderson’s previous film, The Master (2012): an undulating, emerald-clear Rorschachian sea. If Anderson’s thinly veiled take on the origins of Scientology represented something of a mutation of the baroque religious inklings in There Will Be Blood (2007)—the circa-WWI clash of Protestant fury with industrial capitalism pointing the way to the arrival of delirious post-WWII creeds—we can think of the repetition of this maritime motif as another developing auteurist conceit, an addition to the mounting bank of archetypes Anderson has been withdrawing from for his last five pictures. Here evoking The Master’s existential infatuation with the subconscious and all the freedom and sweet everythings it affords, this is the littoral Eden awaiting us should we ever effectively rip out the paving stones gentrifying not only our society but our minds as well.

Aside from once again featuring a cast so sprawling we can only speak of it as an amorphous gestalt, and ignoring that it superficially represents Anderson’s return to the Boogie Nights (1997) milieu, Inherent Vice’s tale of a hippie stoner dick hired to investigate a plot against his vanished ex’s new beau (or more simply, a wolfman tracking down a Wolfmann) may initially register as a left-field entry in his filmography. Among other foreign factors: the ostensible protagonist’s psyche isn’t chiefly characterized by his feeling like a fatherless child; the men are neither pathologically asexual nor noxiously phallocentric (which isn’t to say the film is without a lovingly fellated cocoa-covered banana); scenes are punctuated by slapstick punch lines as opposed to Anderson’s choice histrionic meltdowns; and the smooth, leisurely camera push-ins and studied two-shots never threaten to induce whiplash or kinetosis. Further, and perhaps not coincidentally, this is his first straight literary adaptation (fanboys who slogged through Oil! can attest that Sinclair’s pen is hardly Blood’s most salient antecedent), and Anderson, for the most part, steadfastly adheres to Pynchon’s madcap characterizations, zinging expressions, and abstruse narrative through line as they appear on the page.

This isn’t to say Anderson’s Inherent Vice is a totally faithful imprint of Pynchon’s text. His modifications range from negligible to curious, including a tearful new ending that rather romantically sees our hero and his ex reunited in the California breeze, though at least they’re not back together again. (“Course not.”) But an especially notable revision is that the role of Sortilège (Joanna Newsom) has been significantly expanded from a non-issue supporting figure into the often-subjective (though occasionally objective) third-person narrator. Newsom’s freak-folk timbre represents the only material presence for Pynchon’s prose in the film; it’s a better truce than is found in most literary adaptations, but the author’s descriptive banter and world-building run-ons are sorely missed. Which is a shame. A sizable degree of Pynchon’s appeal is in his prose, especially in the impressionistic manner in which he constructs characters and their psychological relationships to their universes out of seemingly irrepressible matter—his effervescent narrative threads and plasmatic eccentrics often on the verge of combusting or metamorphosing into honestly who cares what. However, cinema being the audiovisual medium that it is, we can’t expect the literary adaptation to provide the same kind of syntactic energy that we’d find in its source text. The challenge is to compensate for the loss of such a vital aesthetic design with another of the same calibre.

This is where Anderson slips. Not because his film isn’t formally accomplished—one would struggle mightily to name a Hollywood film, let alone a comedy, from the last year or two that exudes as much of a magisterial presence—but because the formal approach he opts for, as pleasingly lurid as it is, privileges the narrative’s concrete themes and organization over its rhythms and teeming mayhem (that is, unless doobie-induced paranoia and chillaxation are still our gold standards for cosmic anarchy). Anderson’s urge to craft Altmanian pastiche, belaboured as soon as he updated (but didn’t quite improve on) Short Cuts (1993) with Magnolia (1999), appeared to have subsided, yet he seems to have suffered a relapse—with an emphasis this time, yet again, on The Long Goodbye (1973) (not to mention The Big Sleep [1946]; it’d probably be most accurate to deem this his “Leigh Brackett picture”).

This is presumably what brought Anderson to Inherent Vice as opposed to other Pynchon texts. It may have nowhere near the rhizomatic curlicues that Gravity’s Rainbow or V. do, but more so than any of his other novels, it conveniently exhibits the all-over narrative compositions favoured in Anderson’s early opuses, while also playing along with the filmmaker’s recent elliptical examinations of postwar American attitudes and exuding the romantic optimism that love will inevitably be delivered to those most in need of it. But arriving, as it does, immediately after the first film in his body of work to feel wholly sui generis, Inherent Vice finds Anderson once again evoking the New Hollywood countercultural ethos so formative for him as a cineaste: the infatuations with and sympathy for idlers; a liberal depiction of uses and abuses of narcotics; and grainy, frank presentations of sexuality, all filtered through quasi-hallucinatory altered states. Complementary as this mode may be to Inherent Vice’s mise en scène, this is the kind of “daring” filmmaking that can’t be said to have actually risked anything. And if it reeks of an artistic and aesthetic regression, it is not merely because it represents a return of sorts to what appears to be a thematic comfort zone for Anderson, but more for its promotion of decades-old formalist ideals as a ceiling for cinematic exploration.

If art arises from dissonance, then Inherent Vice’s inherent vice may well be Anderson’s reverential fidelity to Inherent Vice. The novel speaks to a purgatorial cultural moment for America, when failed countercultural movements were forced to face the futility of their endeavours and succumb to the pervasive commoditization of everything they held dear—a conflict that is neatly analogous to the current crisis facing purist cineastes fighting against the digital revolution. Whether Anderson’s all-in embodiment of this preservationist sentiment is a brilliant move or a stifling one may depend on viewers’ own stock in that fight, though it’s worth mentioning that Singin’ in the Rain (1952) would have made for an awful black-and-white silent, and the electric HD polish of Public Enemies (2009) remains Michael Mann’s boldest aesthetic statement to date. So at a moment when causes such as the Save 35mm movement render many of Hollywood’s most authoritative voices into tenacious pedants who just would not be able to bear a hiccup in the exhibition of their work—and this does include Anderson, who test-screened a 35mm print of Inherent Vice in New York’s Walter Reade Theatre who knows how many times or for how many days before deciding to instead show soaked and drowsy press and media a DCP—pastiche would appear to have regained at least a smidgen of cultural integrity in its railing against commodity and the looming doom of digital big business. Now to think back to Anderson’s appropriation of the mega-blockbuster-preferred 70mm format on which he lensed The Master—an intimate drama in which a man becomes acclimated with the celestial insignificance of his personal struggles to get laid—and we might catch a glimpse of what a difference some dissonance makes.