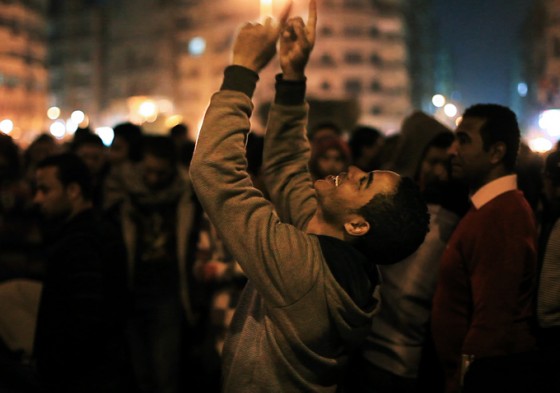 When compared to its fellow Academy Award nominee The Act of Killing (2013), Joshua Oppenheimer’s supposedly radical examination of memory, myth, and representation in the construction of historical meaning, The Square probably comes across as reflecting a more conventional approach to documentary filmmaking. Its title, of course, refers to Tahrir Square, the nexus of the popular protests that toppled first the Mubarak dictatorship, and then the Morsi presidency. But we might be forgiven for treating the title as a double entendre, also commenting on Jehane Noujaim’s seemingly solid reportage and direct-cinema manoeuvres. Lacking overt flights of fancy, it’s a pretty “square” film.

This is largely due to difference of intent. Where Oppenheimer is picking at old scabs and revisiting the scumbags who executed the direct orders of those in political power, Noujaim remains down in the bustle of a developing story, firmly at ground level and looking at power from a distance. Or perhaps better yet, The Square insists that “power” actually resides at this ground level, and not in the protected echelons or behind the exercise of force. What’s more, The Act of Killing revels in the Indonesian death squad members’ cinephilia, their sense of themselves as suave gangsters or protagonists in a great nationalist musical epic. Oppenheimer allows them to “direct” their own propagandistic mythologies, presumably to deflate their pretenses through irony and embarrassment, but at the same time to win their trust, as well as make a rather wan postmodern point about the hermeneutic circularity between the image-world and hard, life-and-death reality.

Noujaim’s investment in representation is seemingly more conventional. “The people” represent their interests, and Noujaim represents “the people” metonymically through individuated examples. In focusing on a few key subjects—three men, with select others on the periphery—as exemplary of the entire Egyptian democracy movement, which is depicted through assembly after assembly at Tahrir, Noujaim articulates a linear narrative whose bedrock is a Middle Eastern variant of Jürgen Habermas’ public sphere. It is through coming together physically (with assistance from social media, but pointedly not with an over-reliance upon it), in en masse face-to-face relationships, that the Egyptian people sparked their revolution(s). They stated their grievances in a clear voice (“The people demand the fall of the regime”), while at the same time coming together across and through difference (“Muslim and Christian, we are One Hand”).

The Square takes a very complex political situation over three years’ of turmoil, rupture, and stasis, and parses it into a clear story, marked with crisis points and moments of decision, all of which are punctuated by mass demonstrations. The narrative woven by the film, furthermore, is one of modernist social formations rather than an “internet revolution” fomented by 21st-century technologies and interfaces. The kind of emphasis on social media one sees again and again in, for example, accounts of Iran’s Green Revolution, is notably absent in The Square. This is an interesting choice from the director of both Startup.com (2001), a documentary about the early days of the Internet, and especially Control Room (2004), the film that quite ably displayed the global impact of Al Jazeera.

At the same time, a closer look at The Square shows that Noujaim is not exactly worlds away from Oppenheimer in terms of her ideas regarding the impact of cultural production on the social and political sphere. She by no means subscribes to some outmoded base/superstructure model, wherein a society’s cultural output is a secondary outgrowth of its political reality, slavishly reflecting it. But The Act of Killing posits a kind of historical Ouroboros, in which executioner Anwar Congo went to the movies, saw gangster bad-asses, resolved to kill more communists, and eventually ran the local movie house with his gang. Oppenheimer is ultimately fascinated with the vicious circle of universal complicity, a space where thuggery and entertainment are so mutually informative that there can be no outside place of adjudication, much less cause.

The Square, on the other hand, identifies change with activist art, culture, and rhetoric. Its main subject, Ahmed Hassan, is a protester who is continually shown arguing, debating, carefully explicating his point of view. Unlike every other subject in the film, Ahmed appears in tilt-shift when he walks through the backstreets of Cairo. Coming with his own formal device, this articulate Christian becomes the centre of a visual vortex, the dishevelled environment gathering itself around him. Noujaim depicts his intelligence (and eventually his depression and fear) as possessing world-making capacity, and he is shown as having this ability in relative isolation. When he’s with his companions, he is still somewhat isolated. This is especially the case with respect to his friend Magdy Ashour, a Muslim Brotherhood member who consistently bucks the party line (he opposed the deal the party made with the post-Mubarak military leaders), but felt Morsi was ousted too soon. In time, the men are, to put it lightly, no longer “one hand.”

But the other individuals who Noujaim pulls from the fray, such as British-raised Egyptian actor Khalid Abdalla, or “singer of the Revolution” Ramy Essam, are artists rather than ordinary activists. Although The Square tends to place women at the margins of its revolutionary narrative, and never once addresses the post-Tahrir marginalization of women’s issues by various activist factions, we do see particular women, such as journalist Aida el Kashef and human rights attorney Ragia Omran, working behind the scenes. The formal strategy adopted by The Square consistently emphasizes a kind of “talented tenth” of the revolution who are in some way connected with artistic expression or unique verbal or intellectual gifts.

One might question whether Noujaim intends for her subjects of focus to be metonymic for the hundreds of thousands gathered in the square. However, there is little in the way of articulation between the intimate scale of the subjects, whose passionate defense of their position is matched only by their consistent threat of bodily harm, and the massive sea of humanity filling Tahrir Square. Put another way, Noujaim moves between close-up and extreme long shot, without much medium ground in between. Anonymous artistic creation tends to serve as the connective tissue in this regard, such as the repeated transitional mural and graffiti paintings depicting the state of the revolt, often with bracing directness. (Before showing footage of the deadly protest outside the state media building, we see a close-up of bloody drips of red paint.) And, in a touch of unexplored self-reflexivity, Hassan and Noujaim show us “Tahrir Cinema,” a makeshift, mid-protest screening in the square during which much of the footage we’ve seen of the mass demonstrations is projected onto a hanging sheet.

This instantaneous turnaround, with filmmakers in the midst of a political situation then showing what they’ve seen to those involved while the situation continues to unfold, has a long and proud tradition, from Vertov and Medvedkin in the pre-Purge USSR through Godard, Marker, and Third World Newsreel in the ’60s and ’70s. By including this practice in her film (without providing any background on the Mosireen media-activist group, who were instrumental in organizing said events), Noujaim removes the specificity of the action and, by a kind of metaphorical osmosis, absorbs its importance into her own project. The actions of a media collective become legible only as individual initiative. And as valuable as The Square is, this individual focus becomes its downfall again and again. Making a comprehensible story out of the chaos of the ongoing Egyptian Revolution has meant reducing it to the efforts of a few exceptionally talented speakers and artists. In trying to hold fast to a classical public-sphere model of social action, Noujaim may have accidentally constructed a cinematic rhetoric that posits a revolutionary vanguard.

The flaws of The Act of Killing seem obvious. Oppenheimer, in some sense, has taken his experience with Congo and the other Indonesian murderers as an opportunity to create a kind of nihilistic cinematic endpoint for Derrida’s maxim that “there is nothing outside the text.” Since these men were in part guided in their death-squad procedures by the bad-boy swagger of Alain Delon and Amitabh Bachchan, it is only logical that they would “become” genocidal film directors, and perhaps even achieve some ethical awakening through cinema rather than engagement with reality. But The Square’s assumptions about the divide between representation and reality seem to be clearer, in large part because of Noujaim’s adoption of the kind of transparent rhetoric that, whatever else you can say, The Act of Killing forever renders suspect. If the Egyptian Revolution is depicted as a contest of voices in a bustling public square, not all of those voices are created equal in Noujaim’s film. In watching The Square, I was taken by how many times an argument among its principal subjects would expand to a wider, more chaotic dialogue, only for the subtitles to read: [indistinct chatter in Arabic]. It seems to me that it’s in that “chatter” that a broader vision of Egyptian democracy is likely to be articulated.