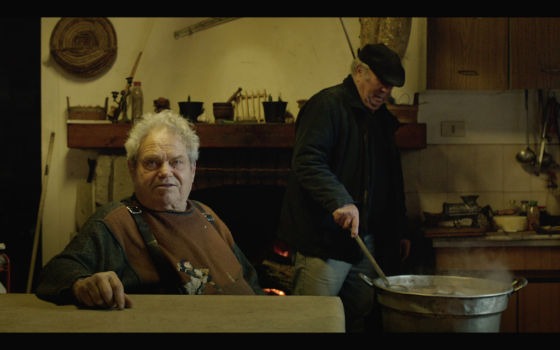 The talking-head documentary, anathema to the more purposive (i.e., “show, don’t tell”) modes of nonfiction filmmaking, is revived with stubborn, prolix determination by the brood of Etruscan elders who preside over the unassuming habitat of Il Solengo. An award winner at last year’s Docslisboa, the film traces the speculative and spectral existence of one Mario de Marcella (the “de” being critical here), who is said to have lived a recalcitrant, hermetic life within a forested cave in Tuscia, as withdrawn from the pack as the film’s eponymous male boar. Il Solengo’s narrative is literally hinged to oral tradition, emanating from the yarns unspooled by these aged hunters: the richness of the world is gleaned from a fixed stance of wine glass in hand, sauce simmering on the stove, logs blazing in the fireplace.

“Back then, if you didn’t sow seeds, you went hungry,” one of the hunters dolefully intones, implicating the seemingly slight Il Solengo within a native tradition of films about nostalgia, memory, and history, even while its doggedly contemporaneous mise en scène strays no further than a senescent hunter from his chosen prey. “Before, people set their own laws: if you cut my plants, I’d chop your trees. Burn your crop.” Indeed, as retribution was to transgression, so too was embellishment to memory: it was in the act of telling that the essence of any particular experience was rendered, fact and folklore becoming indistinguishable as a result. Alessio Rigo de Righi and Matteo Zoppis uncovered this propensity for legend while on the set of the short Belva Nera (2013); their previous collaboration served as a conceptual foundation, and verbal fount, for Il Solengo’s “tell, don’t show” methodology. Conjecture about a black panther sighted in the Lazio countryside provokes the talking plot of Belva Nera: “Nobody believes it but I saw it,” confesses the coot of a cowboy roaming the marsh with a shotgun, who reappears as the statesman of Il Solengo’s ranks. Gone from their new film is the ironic use of a Morricone-esque twang that winked toward generational disparity played for artistic ends; intact are repurposed characters and the presence of a country lodge that serves as the elders’ hub, “where regular folk come to eat and drink and just be a pain in the ass.”

From this modest conceit, Il Solengo doesn’t forge a narrative so much as tap its source, as the men’s testimonies are distilled into a seamless rant that disguises any directorial solicitation. The members of the droll ensemble (resembling Elmer Fudds cast in an RAI nature doc) reminisce about trophy kills, lament the encroachment of outsiders on the land, and invariably speculate about the fate of Mario, a former hunter who became a hermit after “maybe what happened to his mother damaged his mind.” Pregnant with Mario, she killed his father with a garden hoe while he slept. Or maybe it was a pruning hook? Perhaps Mario was a year old when it happened? Even if some say she was innocent, she nevertheless went to prison, and the kids skipped school to peer at the blood-stained walls. A theory is floated that maybe the sad state of Italy was to blame for Mario’s inexplicable condition: “I’m told ’29 was Italy’s worst year, and that’s about the time of Mario’s thing,” offers Giovanni, sometimes framed by the camera in direct address, his head mounted like the lodge’s taxidermy.

The discursive proceedings would appear to be without any decisive agenda, leaving the audience with the vicariously charming but possibly enervating experience of spending their time in the company of retrofitted old men, scarcely the stuff upon which transcendental cinema might thrive. But the directors’ strategically evasive means of parsing content—call it a cinema of omission—lends a gravity to what is latent. What isn’t seen, but is unemphatically broached by storytelling, accrues suggestive power by conspicuous absence; the background becomes foregrounded. The camera witnesses the men in their daily routines—cheese is made, boar meat is ground for sauce (“What’s this, an eye? Throw it in!”)—and is prompted by the incidental cues of dialogue. “Did you ever see him in a bar?” asks one, priming his story for maximum effect, “He was wild.” The camera cuts to a bar, but the drama of Mario threatening one Felice Cattivo with a fence nail is relegated to mere gossip, left purely to the imagination.

Therein lies the efficiency of storytelling, of course, which cinema is all too anxious to exploit as spectacle. In the absence of action, however, what remains except for residue on the banal surface of the world, mere lichen on the trees? Rigo de Righi and Zoppis invert the paradigm, using a simple cinematic grammar as a means of composting the ordinary into something richer, the images acting as pretext to what the ear, seldom afforded the opportunity, can uncover. And then too the tale reveals little but offers considerable insight into the teller. To the presumed chagrin of the viewer Mario never effectively materializes, but his absence compels a kind of anthropological investigation upon these least cinematic of characters. Their lives, the film structurally implies, will be subject to the same fate of listless re-description, albeit of mythic proportions.

Having telegraphed any action through mere language, the film is free to effectively wander the fertile surroundings: the camera intermittently diverts from talking heads and tracks through the thicket that shrouds Mario’s putative cave. In a reversal of Plato’s allegorical space, the cave is posited through hearsay as a realm wherein one can trust the reality of one’s surroundings, a safe haven for refuge from the dark shadows cast by the real world. A retreat into nature, from this view, looks less misanthropic, with the hermetic impulse a survival mechanism. For all the damning that Mario’s reputation suffers, the plaintive tone of collective remembrance toward him implies a sense of forgiveness, a eulogy for the living.

Adequately risible as an astringent comedy about the mannerisms of a peculiar species (genus Italian)—cue the ripened, cane-wielding, Jaguar-driving dandy Lanfranco who claims to be stranger still than Mario—Il Solengo transcends mere peculiarity by prying something wistful and elemental from its secular tale. How, the directors endeavour to show, do you make the uneventful be of particular consequence? Il Solengo leaves any theorizing to its elders: “We human beings can’t understand things we haven’t lived,” says one, in a momentary reprieve from rancour. As for that nagging question that has pursued documentary practice since its inception, these anziani are spry with insight: “Let’s say I tell a story, and someone else yet another, no one’s ever gonna know the truth! They’re all rumours.” Lest one be tempted to describe Il Solengo as intimating something about the inscrutable essence of life, Lanfranco proves to be a poor man’s Pavese: “One guy goes to the moon, the other to the bottom of the ocean, how do I know it all, how?” he implores, cane brandished for emphasis. If the richness of life lies in the memories we have forgotten, per Pavese, the richness of the film is derived from that which can’t be fully brokered by memory, conjured through language, shared by story. Il Solengo posits that narration may, by nature, be unreliable.

The apparition of Mario serves as narrative foil, and acts as an index of personal and cultural woes (a fight long ago, among workers in Rome, lingers on at the cusp of memory). From beyond the grave, or just outside the camera’s frame, the voice of an unrepentant Mario bears down on the film’s coda with a clarity of resignation to reveal the sorrow of local exile, self-imposed or otherwise. There’s no accounting for some kinds of suffering. Mario’s habitat hewed all too faithfully to his feeling of being “rotten on the inside,” where the talk of townsfolk was silenced by the storied hiss of vipers that sang on the stones. There are some things that are too intractable for stories—even in film’s vernacular—to tell.