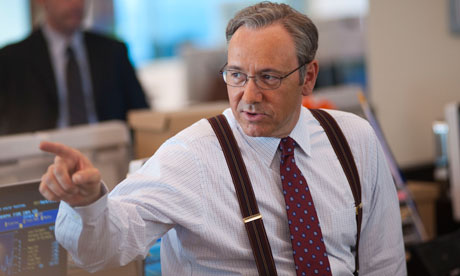 The Occupy Wall Street protestors who assault the hapless Kenneth Park ( Bobby Lee ) near the beginning of A Very Harold and Kumar 3-D Christmas are a sight gag: an excuse to restage James Caan’s tollbooth execution in The Godfather (1972) with hucked eggs in lieu of bullets. “They’ve lost their jobs…you’d be angry too” explains Harold (John Cho) moments before the yolky outburst in an attempt to mollify his friend, who thinks they’re all dirty, bearded psychos. The line can also be turned around as a sympathetic nod to the proud stoner franchise’s predominantly college-age audience, many of whom would happily self-identify with that demographic. Stilted and slack where the original was supple and spontaneous (though still an improvement over the confused first sequel), H&K 3 is interesting primarily for the way it negotiates Harold’s hard-fought arrival amongst the proverbial 1%. It frames his newfound wealth and privilege—a high-paying job, a massive house, a lavish Yuletide spread—as the end result of giving up his adolescent preoccupations; and it’s telling that by the end of the film, the defiantly juvenile Kumar (Kal Penn) has been similarly convinced of the benefits of “maturity.” That the filmmakers still permit the heroic duo a final clandestine puff is more of a sop than a statement of purpose.

Where H&K 3 scans as mildly conservative, Andrew Niccol’s characteristically half-cocked In Time is one of the most conspicuously anti-capitalist Hollywood movies in recent memory. Set in a (ludicrous) near-future where scientists have imposed artificial limitations on human lifespan—everyone lives till 25, which is a better deal than the 21-and-done scenario of Logan’s Run (1973)—the film literalizes the time-is-money metaphor: everything, from a cup of coffee to the monthly rent to the lease on a new car, is measured in seconds, minutes, hours and days. Niccol, who is like J.J. Abrams’ slightly tonier twin brother (they both always start with a good idea and demonstrate little ability to bring it through), fails to mine this premise for nearly enough humour or invention—though there’s both in his casting of Olivia Wilde as star Justin Timberlake’s doting fifty-year-old mother—but he does rep a more revolutionary position than any feature film yet made under the shadow of the global financial crisis. Positioning Timberlake and co-star Amanda Seyfried as the most anodyne Bonnie and Clyde duo in cinema history, Niccol applauds their climactic gesture to shock the system by passing a million years’ worth of time onto the teeming masses—a stimulus package for the 99%, who respond by immediately sloughing off work and marching on the homes of the temporal elite.

If J.C. Chandor’s Sundance-feted Margin Call is the best of the new American films that deal with the shattered economy (excepting Jeff Nichols’ excellent Take Shelter, which subsumes its critique into the language of an actual apocalyptic thriller), it’s not because it’s great. In fact, it’s considerably less than that: a poor man’s Sidney Lumet movie, maybe. But if Lumet’s great virtue, even in his unsuccessful or overrated films, was the space he afforded actors to do their thing, then the 30-something Chandor warrants the comparison in a good way. Set at a large, layoff-gutted New York investment bank modelled after Lehman Brothers, and set in a 24-hour period that overlaps the beginning of the credit crunch, the film is primarily a showcase for its cast. Chandor’s minor triumph is that he gets more out of certain actors as a first-timer than many more experienced directors have managed in years.

Exhibit A would be Kevin Spacey, who works smartly against typecasting here. It’s the opposite of his tiresome turn in Seth Gordon’s execrable Horrible Bosses, which thought it was the height of postmodern wit to cast the sneering slave-driver of Glengarry Glen Ross (1992) and Swimming With Sharks (1995) as yet another elegantly tailored asshole; the result was a by-the-numbers performance no more inspired than his agitated mugging in the drab HBO drama Recount (2008) or George Hickenlooper’s well-nigh unwatchable Casino Jack (2010). Spacey disarms in Margin Call by toggling between elements of his cold-fish specialty act and warmer tones. His long-serving trading-floor manager Sam Rogers is introduced mourning a terminal diagnosis for his pet dog, and Spacey takes this transparently writerly nugget of character development and runs with it: when he zestily applauds the survivors of a massive department layoff and tells them that their former colleagues’ loss is their gain, the rhetoric is only mechanically cutthroat. Called back to the office after closing time when one of his junior traders (Zachary Quinto) discovers a dire algorithm in the firm’s risk-management statistics, Rogers goes from middle-management stooge to strangled voice of reason, advising his superiors not to flood the market with their toxic assets. He knows better, and, in a different way, so do we. Rogers’ Chicken Little act is doomed to fall on deaf ears, which makes him the key figure of this long-day-trader’s-journey-into-night drama. 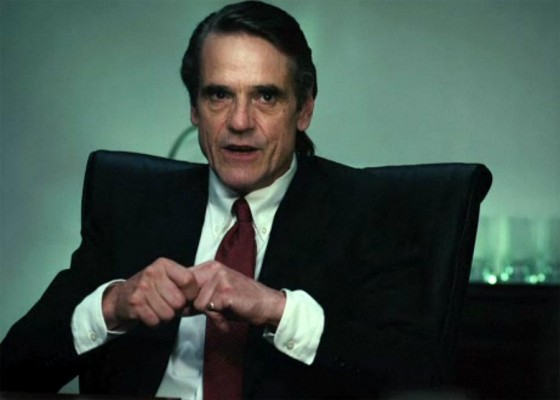 At the other end of the spectrum—indeed, in a cartoon-monster role that Spacey could have easily played—Jeremy Irons tucks into his part as the firm’s serpentine CEO John Tuld, who suggests Claus Von Bulow with an even bigger 401(k). Arriving via helicopter and hovering imperiously above his subordinates even after his feet touch ground, Irons’ Tuld is the manifestation of every easy anti-corporate sentiment imaginable, and yet it’s still a good performance; it’s as if the actor, who has always excelled at inhabiting high-rolling sleazes, had gauged the level of the ensemble around him and kicked it up a precisely measured half-notch. When he asks Quinto’s gee-whiz-kid hero to explain the problem to him as if he were a small child, the actor’s relish in grotesquerie connects with the character’s, and it’s got a tingle.

Quinto, who’s like a quizzical cross between Ben Affleck and Adam Scott, gives decent ingenue, and it’s interesting how his character recedes as the film goes on, less a hero than a powerless bystander. He’s the one who sees the pattern in the first place, but he exerts progressively less influence as the information travels up the food chain. Playing Spacey’s chief underling, Paul Bettany is burdened with Chandor’s most nudging dialogue—”it’s a long way down” he sighs while overlooking the New York skyline—but he’s more awake than in his recent regrettable bids for action-hero status, and he has a lovely verbal duet with Stanley Tucci as a sacked trader searching for some moral high ground in his previous vocation as a civil engineer. Tucci also gets one effective scene opposite Demi Moore, whose character surely isn’t flattering—another hollow-souled career woman who has forsaken a personal life—but who contributes some effectively low-key line readings and, like Irons, threads her own actorly perspective (in this case, as the only female in a male ensemble) through her character’s outlook. 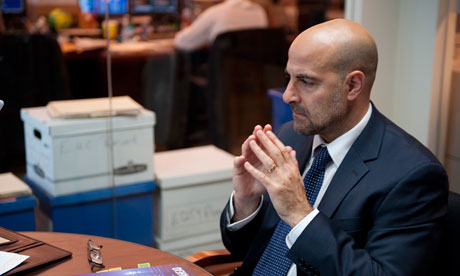 Chandor has an eye for casting and an ear for dialogue, but he doesn’t quite have a sense of how to make this inherently stage-bound material work for the screen. For all the staccato talk of how the sky is falling, Margin Call doesn’t evoke much of a world beyond the boardroom, and while a sense of insularity isn’t always a problem in this kind of filmmaking (see the aforementioned Glengarry Glen Ross, which shrinks the universe to the size of an office and a chintzy Chinese restaurant) the sameness of the visual set-ups grows gruelling instead of increasingly immersive.  Oliver Stone found the right visual language for luxe power play in his erratic but underrated Wall Street: Money Never Sleeps (2010), with its sudden rugged detours into overgrown forests and wild camera flourishes. Chandor’s style is no more than functional, and when he does trot out a visual metaphor or two—like  Irons dining alone at an immaculate white table overlooking the city, or a reverse angle on a stripper whose bodacious body is like another dangling carrot for Quinto and fellow ambitious newbie Penn Badgley—they’re overdetermined. But even when he’s straining, he isn’t unlikable: his film’s thrust is less “told you so” than “how did this happen?” It’s a good question, and as long as the vast majority of American films are playing it for laughs or ignoring it altogether, Margin Call stands, if not above the pack, then at least resolutely on its own.