By Angelo Muredda In CS61, Currency, From The Magazine 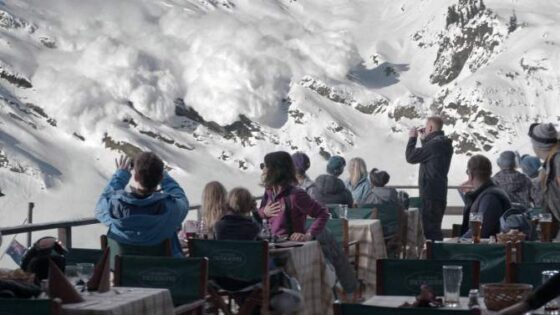 With all respect to David Fincher’s Gone Girl, Ruben Östlund’s Force Majeure is the best formalist black comedy about marriage since Eyes Wide Shut (1999). Inasmuch as its outline suggests an essay on the crisis of masculinity—one distilled to a defining image (emblazoned on the vaguely apocalyptic poster) of a patriarch shirking his fatherly and husbandly duties in a moment of unthinking self-preservation—on paper the film has all the makings of an airlessly essentialist fable. It’s no small wonder, then, that in place of a strident think-piece about what happens when an external crisis knocks a nuclear family sideways, Östlund offers a much wryer, individualized portrait of a clan unconsciously asserting its eccentricities in the face of primal forces.

That isn’t to say that Östlund’s penchant for singling out the particular case within the universal precludes him from deriving nasty fun out of twisting familiar institutions out of shape. Before it gets around to pulverizing the patriarchy, Force Majeure opens with a good-natured swipe at the bourgeois family’s favourite totem—the family portrait—as it presents a deceptively sweet tableau of a good-looking Swedish tribe headed by proud blonde papa Tomas (Johannes Kuhnke) and brunette mom Ebba (Lisa Loven Kongsli), overseeing their adolescent son and daughter. Kicking off a weekend skiing vacation in the French Alps, presumably meant to serve as a respite from Tomas’ intensive work life and possible history of philandering (if Ebba’s prescriptions against texting are anything to go by), the family is posed and re-posed over the course of the opening credits by a photographer who insists upon capturing them in every banal permutation, arranging them according to descending height, alternating gender, and jacket colours. This overture is a sly tipoff that what follows will be about the weakness of traditional tribal roles and false fronts, adopted with wan smiles and good posture for cameras and strangers, when faced with a real catastrophe.

A sharp visual stylist, Östlund makes good on that thematic promise in the first act by setting the family’s barely controlled dysfunctions off against the chalet’s rigorous custodial functions, the daily tasks required to maintain this machine-tooled oasis of bourgie comfort just steps away from a sublime natural world that it reduces to benign scenery. Drawing on his experience as a director of ski documentaries, Östlund crosscuts between surveys of ski lifts and snowplows going through their nightly motions and footage of the family gliding their way through the now manicured spaces in the waking hours. He further divides his family portrait between warm moments in the hotel room—as mother, father, and children brush their teeth in tandem with their electric toothbrushes, and at one point sleep together in a king-sized bed in matching thermal underwear, like a litter of kittens—and chilly, glaringly white scenes of mother and father, brother and sister drifting away from each other on skis at carefully maintained (and meticulously framed) distances. The effect is one of comic foreboding, as we wait for the equivalent of a snapped cable or machine failure to break through the family’s routines.

When the reckoning does come, it’s in a wickedly funny, static single-take sequence that recalls both the pivot point of Julia Loktev’s The Loneliest Planet (2011) and George Costanza’s frenzied escape from a child’s birthday party on Seinfeld. Seated on a restaurant balcony, Tomas and Ebba assure their children that the far-off rumble of advancing snow is just the resort’s latest controlled avalanche, when suddenly the billowing cloud of white advances on them. In an instant, Tomas bolts from the table and past the camera, leaving Ebba and the children alone in the shot, snowed over as white powder fills the screen. Eventually the fog dissipates, and Tomas sheepishly walks himself back to the table and into the shot as if nothing has happened. In one sense, it hasn’t: the avalanche really was controlled, dissipating well before hitting the restaurant. Yet for Ebba and the children there is no un-seeing Tomas’ disappearing act, and, at least until he can admit his actions, no forgiveness.

In interviews, Östlund has quipped that the film could just as easily have been called Avalanche, as neat an encapsulation of his unsubtle metaphor as any. But Force Majeure is ultimately the better title, inasmuch as it evokes a contract that can be renegotiated in the case of extreme circumstances. For Östlund, who is working here in a tricky register between allegory and psychological realism, the extreme circumstance is not just the avalanche and all it suggests about the many forces that can derail a nice bourgeois family, but the sudden awareness that, in an emergency situation, not even private shame and the tradition of fatherly protectiveness can change what a person is really like. Put another way, the family contract is voided by each member’s disappointed realization that Tomas is who he is: the self-absorbed dad forced into family time by the ritual of vacation, rather than the mythic father galvanized by crisis. “I don’t recognize us,” Ebba says after their first post-event fight, and neither do the children, despondently tapping away at their iPads as their parents drift about in the background.

That Force Majeure ultimately feels so specific in spite of its big-picture theorizing is a testament to Östlund’s intelligence about the perniciousness of the mythic masks worn in all sorts of relationships. After its big moment, the film becomes a talky affair, anchored by a pair of dinners with other couples staying at the resort with whom Ebba compulsively shares the story of Tomas’ betrayal. It’s tempting to read these sounding-board couples purely as audience surrogates, dissecting Tomas’ misdeeds as we do and getting behind one partner or another (usually along gendered lines) as we might. But Östlund is wise enough to give each partner his or her own shading. When Mats (Kristofer Hivju) and Fanni (Fanni Metelius) leave the couple’s hotel room after dinner to hash out their version of the argument, it’s inevitably coloured by their own particular baggage: Fanni’s precarious state as the twentysomething girlfriend of a thirtysomething divorcée with kids, and Mats’ hulking manliness and old-school traditionalism.

Ultimately, Force Majeure isn’t about “the crisis of masculinity” so much as the way personal edges never quite get shaved off with the adoption of archetypal roles: not just father and husband, but also mother and girlfriend. In a film rife with smart visual set pieces, from Tomas’ flight from the table to a later family excursion into whiteout conditions that allows him to reassert his dominance, the richest belongs to Ebba. Late in a day off from her family, mostly spent sitting at the hotel bar and having a private ski, Ebba relieves herself in the bushes off to the side of the hill, the camera slowly pushing in on her face as she hears what sounds like her little tribe slowly coming down the slope before her; she tearfully looks in their direction but doesn’t announce herself, troubled by her momentary separateness but not about to change it. Tomas’ actions during what ought to have been a redemptive defining moment are the ones that will surely inspire the most post-screening discussions, as they do with the couples Ebba solicits, but what sets Force Majeure apart is this heightened sensitivity to how even an event as minor as Ebba’s little breather is incongruous with the stories that families tell about who they are.