It Follows (David Robert Mitchell, US)

Jason Anderson/CS62, Currency, From The Magazine 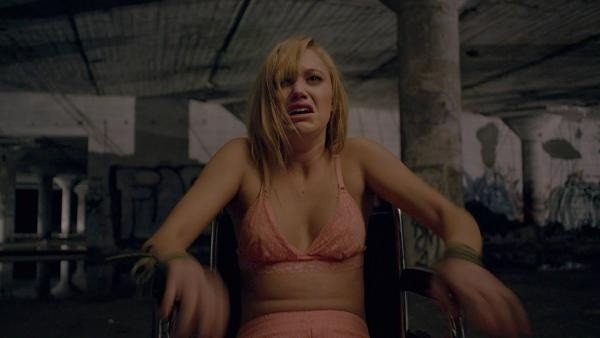 Understandably reluctant to give a more specific appellation to the ever-morphing threat that imperils the teenage characters in his insidiously unnerving thriller It Follows, David Robert Mitchell tends to stick with “the It” in interviews. Given his second feature’s wealth of John Carpenter references, however—a heritage it shares with Adam Wingard’s The Guest (2014) and Jim Mickle’s Cold in July (2014), two other recent American genre efforts that infuse vintage straight-to-video violence with a generous dose of psychosexual dread and other elements rare among fanboy fare—Mitchell might more aptly have dubbed his menace “the Shape.”

“The Shape,” of course, was how Carpenter famously identified his own “It” in the end credits for Halloween (1978)—an influence that Mitchell flags with It Follows’ placid suburban setting, electronic score, and opening 360-degree tracking shot—before it assumed its birth name of Michael Myers in the succession of sequels, reboots, and remakes that followed on the heels of the ingenious but Shape-less Halloween III: Season of the Witch. Yet the Shape remains the best moniker for Carpenter’s boogeyman in its original incarnation: spotted in the mid-distance of Halloween’s halcyon Haddonfield, with its freshly painted fences and manicured lawns, this expressionless, silent, unstoppable figure violated the sanctity of the Rockwellian space through which he moved, shattering the postwar generation’s belief that a flight out of the cities guaranteed the preservation of their children’s innocence, or at least reduced the odds of their being slaughtered in their beds.

If the metaphorical aspect of Carpenter’s American nightmare was disturbing enough, the material element was even more chilling. While certainly inhuman, the Shape circa ’78 was not yet invulnerable in the manner of American horror’s emerging pantheon of collectible-ready icons. Its physicality was discomfitingly inconsistent: it could be sometimes plodding in its movements, and sometimes implausibly fast; it could be impossibly strong, yet somehow also able to be overpowered by Jamie Lee Curtis’ gawky young babysitter. Yet while the climactic moments of the Carpenter original suggested that the Shape might just be an overgrown boy in a mask, the subsequent disappearance of its not-quite-corpse underlined the Shape’s indefinability and hardiness as an emblem of the uncanny.

Inspired by recurring nightmares that the director had as a child while growing up in suburban Detroit, Mitchell’s It boasts many of the same qualities as Carpenter’s Shape, along with a few fresh elements to up the ante—one being its invisibility to everyone but the unfortunate person who It happens to be following. Following the nicely Carpentered opening sequence—in which a teenage girl flees from the unseen menace, only to be twisted into a gruesome human pretzel soon thereafter—Mitchell introduces his heroine Jay, a shy, doe-eyed 19-year-old college student played by Maika Monroe (whose previous appearance in The Guest posits her as the potential Jamie Lee of this new horror cycle). While out on a date at the local movie house, her beau Hugh (Jake Weary) gets suddenly and seemingly inexplicably spooked, and summarily hustles her out of the theatre. (In a nice touch, the title on the theatre’s marquee is Charade [1963]—a choice that is less genre-specific than one might expect, but points to the sly humour that underlies the film’s otherwise anxious and melancholy disposition.)

After consummating her relationship with Hugh in his car in an eerily lit parking lot (the photos of Gregory Crewdson run a close second to Halloween as inspiration for the film’s visual schema), Jay is rudely chloroformed and wakes up tied to a wheelchair. Hugh is apologetic, but explains that he had no choice: the only way to divest himself of the deadly haunting dogging his heels was to pass it on venereally. As he outlines the rules of survival for Jay and the audience—It will follow whomever you next have sex with, but revert back to pursuing you once It kills that next lay; It can look like anyone, but there’s only one of It; It is slow enough to outrun but It will get to you eventually—the first of Jay’s own private Its arrives, in the form of a bruised, naked woman staggering slowly out of the darkness. Mitchell’s clever disguise and dispersal of the parade of Its that follow on the heels of that first manifestation—ranging from an elderly woman in hospital garb to a freakishly tall man whose sudden appearance in a doorway provides the film’s best shock—make the film into a kind of nerve-shredding Where’s Waldo?: savvy viewers will continually be scanning the background of every wide shot for figures who may be proceeding at the It’s signature shambling pace. And like that first It that Jay sees with Hugh, many of those that follow adopt a clothes-optional policy, which only amplifies the erotic charge of a hex that already resembles the worst possible STD.

But even though the punishment of the promiscuous was a fundamental trope of the slasher cycle that it so often evokes, It Follows complicates the familiar equations of sex and death; as in his 2010 debut feature The Myth of the American Sleepover (in which the object of the director’s hero worship was John Hughes rather than Carpenter, but which shares It Follows’ indeterminate time period, suburban Detroit setting, and astute take on teens), Mitchell is more interested in the trickier aspects of youthful desire. For one thing, the curse confers a terrible sense of responsibility on Jay, who is devastated by the knowledge that any further act of intimacy will lead to the likely demise of her partner. After she convinces her friends of the threat’s existence—and nearly dies in an attack at the beach house where they’re hiding out—she agonizes over whether to pass on the curse to Greg (Daniel Zovatto), the hunk who lives across the street, or her friend Paul (Keir Gilchrist), who’s been pining for her since they shared a first kiss. And when she does ultimately make it with Greg, she evinces little relief—perhaps because she is still able to see whatever It arrives on his doorstep. (That the eventual It takes the form of Greg’s mother may be the film’s most provocative gambit, emphasizing the Freudian predilections of the succubus-like threat.)

Just as the film’s take on sex is less about horny hijinks than the naïve hope that giving one’s self to another might bring an end to the feelings of loneliness and uncertainty that fuel so many of the desperate decisions that mark nascent adulthood, It Follows intends for death to be a weightier subject than it is in most horror films—though Mitchell’s efforts to convey that can be unfortunately heavy-handed, particularly when Jay’s friend Yara (Olivia Luccardi) interrupts the action with recitations from Dostoevsky’s The Idiot. (Mitigating factor: she reads it from an e-reader shaped like a pink seashell.) More startling are the scenes when the gang must venture beyond their enclave and into Detroit’s decaying neighbourhoods (“When I was a girl, my parents wouldn’t allow me to go south of 8 Mile,” says Yara as she surveys the dead zone of boarded-up houses and overgrown lawns). But as in The Myth of the American Sleepover, Mitchell avoids the trap of presenting his infamous hometown as if it were a spectacularly grim art installation or a wall-less prison: his youngsters mostly regard the abandoned factories and warehouses where they congregate as places to hang and make out, and even the municipal pool where It Follows reaches its somewhat clumsy climax is treated with the same evocative unremarkableness.

On that point, the ultimate showdown between our de facto Scooby Gang and Jay’s It is marred by some haziness about the threat’s killability, as well as the comparisons it invites with the pool-set finale of Let the Right One In (2008), another poignant (yet far more ruthless) story of young people learning the dangers of intimacy. Yet even though It Follows fails to entirely convince whenever it most closely adheres to genre trappings, the underlying notes of tenderness and sadness are as acutely rendered as they were in Mitchell’s first feature. At no point is this truer than in the film’s last moments as Jay, whose victory over the It is hardly certain, comes to regard her lot not as a hex but an existential condition. She may even find some peace in the realization that there’s no escaping the Shape—you just have to keep moving.

Posted in CS62, Currency, From The Magazine