Fight Club: Judd Apatow’s This Is 40 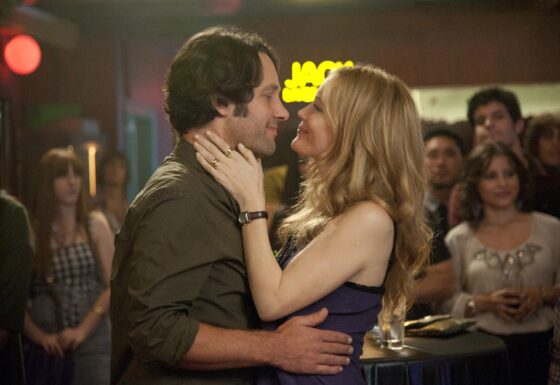 When Paul Rudd declared midway through Knocked Up that marriage was like a “tense, unfunny episode of Everybody Loves Raymond,” it was meant as a warning to a friend. As it turns out, he was also offering an advance review of This Is 40. Judd Apatow’s “sort of sequel” to his career-and-industry changing 2006 hit offers up the continuing adventures of Pete (Rudd) and Debbie (Leslie Mann), still comfortably (if, as it turns out, tenuously) ensconced in their massive L.A. McMansion with their two daughters (Maude and Iris Apatow), and still at each other’s throats; they’re slender, sun-kissed SoCal cousins to the Lockhorns, seemingly incapable of planning a party or programming an iPod in peace.

In Knocked Up, Pete and Debbie’s long-running grudge match was deployed in counterpoint to the younger and less romantically seasoned protagonists; here, it’s the whole show. This redirected focus can be read as a continuation of Apatow’s project in Funny People (2009), which offered critics an engraved invitation to speculate about the film’s autobiographical correspondences, with the director’s real-life wife and kids caught between two authorial self-projections: Adam Sandler’s wildly successful and emotionally hollow career comedian, and Eric Bana’s only superficially more stable suburban paterfamilias. But where that film at least nominally interrogated  the hostility simmering within its characters—framing it as a toxic by-product of the show-business lifestyle—This Is 40 simply indulges it, at great length and screaming volume, and with considerably diminished returns.

This is not to say that the anger that Pete and Debbie direct at each other—and, really, everyone else they come into contact with—is dramatically unmotivated. Pete’s self-started record label is in distress, having cast its lot in with faded guitar slingers like Graham Parker; Debbie’s clothing store is out $12,000 because one of its two employees—foxy Megan Fox and psycho Charlene Yi—has been skimming from the till. Throw in the fact that Pete’s debt-ridden father (a hoarsely boisterous Albert Brooks) is a mooch, while Debbie’s surgeon dad (John Lithgow) has kept himself (and his money) at a remove for years, and it seems like Apatow is at least attempting to respond to the criticisms that Knocked Up‘s carefully applied patina of slacker realism—bounced rent cheques, poor job prospects and dwindling savings accounts—was undermined by its gated-community backdrop. (Recall also the supposed socioeconomic indignity of Rogen slinging potato salad alongside the RZA in Funny People).

The spectre of financial ruin slots alongside the theme of physical and emotional decay. A friend’s sarcastic suggestion that This Is 40 could be a prequel of sorts to Michael Haneke’s Amour isn’t so far off target considering the desperate, co-dependent cruelty of its central couple. An opening shower-sex sequence sets the tone: surprised by the sudden vigour of Pete’s lovemaking, Debbie is disappointed to learn that he’s popping Viagra. “We’re young people and we don’t need medication to fuck,” she screeches, introducing a motif of thwarted sexual encounters that includes flatulent foreplay, an abortive blow job and, in a scene that briefly flirts with affecting naturalism, a boobs-out come-on that fails to distract Pete from his iPad. Pillow talk is fleeting, but laced with homicidal intensity; when Debbie confides that she’s fantasized about murdering her husband by poisoning the cupcakes he surreptitiously scarfs every morning despite his promises to get into better shape, she sounds like a sociopath (or like Michelle Williams in Take This Waltz [2011]).

So while we know what’s wrong with Pete and Debbie, we’re also cued from the get-go that it’s nothing a few methodically doled-out life lessons can’t fix. The potentially unsettling elements are all safely contained within Apatow’s sitcom sensibility; the obstacles he keeps dropping in Pete and Debbie’s way are either easily surmounted (an Iranian couple wants to buy their house for more than it’s worth) or adroitly sidestepped altogether. The absolutely vicious tenor of their big mid-film blow-out fight—the scene that has led certain easily impressed parties to invoke John Cassavetes—lingers in the mind not because it’s especially powerful but because there’s nothing in the back half of the film that satisfactorily addresses either characters’ qualms. Instead of asking its protagonists to work through their impasse, the film manufactures an abruptly affectionate detente with a mechanical efficiency barely disguised by the squishy particulars. As in Knocked Up, an unplanned pregnancy strengthens a fraying relationship, and as in Knocked Up, a certain word rhyming with “shmasmortion” is never uttered, even though once again it seems likely, given the circumstances, that the idea would at least be on the table.

Mann’s performance suffers mightily from the fact that Debbie is a nearly irredeemable character: shrill, impulsive and self-righteous. All of which could be funny and bracing if the film weren’t so determined to remind us that she’s also a fiercely loving and protective mother and an eminently desirable hottie, as in a bit where she charms a group of NHL players at a nightclub. It’s less that Debbie (or Mann) contain multitudes as it is that Apatow is trying to have it every which way at once: she’s whatever the movie needs her to be at any given moment, which most of the time means a shrieking, hormonal harridan. As for Rudd, he tries to give Pete some darker shadings—”people think I’m so nice, but I’m really a dick”—but the movie keeps letting him off the hook. His professional struggles stem from nothing worse than an abundance of integrity; his refusal to acquiesce to the whims of a mindless pop marketplace simply means that he’s got the same good dad-rock taste as the film’s soundtrack supervisor; his lying about money is a defensive manoeuvre against his wife’s hypercritical assault.

As usual, Apatow’s main male character receives a highly physical comeuppance: Pete crashing his bike after storming away from his own 40th birthday party rhymes with Steve Carell’s head-first trip through a roadside billboard in The 40-Year-Old Virgin (2005) and Sandler’s hellacious front-lawn beating in Funny People. But Pete’s not necessarily obliged to learn anything from the experience beyond the patently (and uninterestingly) obvious: love the one you’re with, cherish your family, etc. None of the thorny interpersonal interactions here leave anything like scars, and at times, the lack of consequences is frankly disturbing, as in a scene where Pete and Debbie bait the mother of one of their daughter’s classmates (an awful Melissa McCarthy) into a murderous rage and then skulk away smirking, complicit with each other (and the audience) in the abject humiliation of a rival who rightly bemoans how the pair’s clean-cut appearances let them get away with murder.

That sense of superiority is also carried through in ways that don’t feel satirical. Rudd’s common-sense mockery of both “Eastern medicine” and the accent of the doctor practicing it reek of post-PC posturing, and while the fact that the film’s ensemble is lily-white is not in and of itself a problem—the same way it isn’t on HBO’s Apatow-produced Girls, whose creator-star Lena Dunham shows up here for a (perhaps inevitable) cameo—there is something uncomfortable about how this deeply cloistered film (and its marketing campaign) gestures toward the universal. It’s in the trailer’s ridiculous tagline (“This isn’t just their story—it’s everyone’s story”) and also in the relentless onslaught of middlebrow pop-culture references, which suggest that the continuum of shared human experience can be whittled down to watching  hit television shows on a laptop. (At one point, a long-standing family rift is mended by a communal viewing of the final episode of Lost.)

Apatow is by no means the first or only filmmaker to use his movies to showcase other things that he likes, whether it’s Graham Parker—who’s winning enough as a faded star resigned to his downward sales curve—or Lost, or The Pixies, or Ryan Adams, who shows up in This Is 40 as a  sort of singer-songwriter-ex machine, a nicely MOR performer who dad-rocker Pete and pop-tart Debbie can agree on and potentially use to save the family business. But it’s a blank, uncritical inventory, and it frequently stands in for the work of crafting actual jokes, the same way that mere citation is the default comic mode on a show like Family Guy. Similarly, Apatow doesn’t really do anything useful with the famous faces in his supporting cast. There’s satirical potential in the presence of Megan Fox as an object of horny middle-aged desire—and some wit in having Mann be the only member of the cast who gets to fondle her famous breasts—and yet the role is rather quickly reduced to a weird hooker-joke punchline (and the less said about Knocked Up alum Yi’s bizarrely conceived extended cameo, the better).

Like pornography, the Apatow tone is hard to describe but instantly recognizable when you see it. The house style is familiar: it’s in the plushly homey backdrops littered with recognizably branded items and accessories, the stilted line readings of his kids, the slumped camera set-ups that wait around for the talented actors on hand to hot-wire ensemble conversations with inspired riffing. What’s odd is that while it would be impossible to mistake a frame of This Is 40 for the work of any other filmmaker, it doesn’t seem like Apatow is getting better at what he does so much as leaning ever more heavily on certain of his crutches—which is not exactly the right look for a filmmaker who is also ostensibly blasting beyond the comfort zone he’s created for both himself and his audience.

That’s why This Is 40‘s occasionally startling intensity doesn’t feel like an actual breakthrough so much as a calculated grab at maturity by American cinema’s sophomoric poet laureate. That Apatow’s reach far exceeds his grasp is one thing; the way that he quite literally gives himself a hand for trying is another. The warm, gentle applause that concludes This Is 40 is technically for somebody else,  but there’s little doubt who its real target is. It’s canned approbation, the rhetorical equivalent of a laugh track. After all, Everybody Loves Judd.