Tom Charity/CS72, Currency, From The Magazine 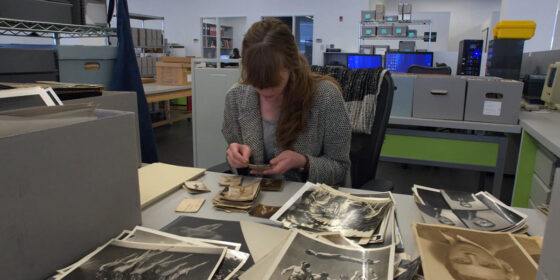 Let’s start with this: the transitions in Fred Wiseman’s new film (and there are many) have a simple and specific beauty. They double as establishing shots, each comprising a brief cluster of New York street views, usually including an intersection sign to pin us to one of the 88 branches in the world’s biggest city-library network, and also as a kind of rest, a bridging and a breathing point. These shots rarely last for more than a few seconds—you rarely hear much about Wiseman’s brevity, but he’s actually about as succinct a filmmaker as you will find, if you’re really paying attention. As illustration: to coax us in to the three-hour-and-17-minute Ex Libris, Wiseman hits us with the title card, a shot of the sign bearing the words “New York Public Library,” a shot of the landmark Stephen A. Schwarzman Building from across the street, a medium close-up of a revolving door, and, boom, into the first scene. Total running time: 15 seconds.

Swift as they are, these transition montages serve as Ozu-esque interludes, moments of relief and reflection, a counterpoint in their airiness to what is otherwise a film of interiors, of words and content. Then again, if you were to pull them out of the movie and run just the transitions end to end, wouldn’t it make for an entrancing waltz around the Five Boroughs? And wouldn’t it also speak eloquently of the social and economic disparities—and diversities—to be found in the city?

Wiseman is 87 now. It may be a little presumptuous to suggest he’s reaching for a summation, but it is sure that he’s only making the films he wants to. Over the last decade, those projects have taken him to Paris (twice) for La danse (2009) and Crazy Horse (2011), to London for National Gallery (2014), to Berkeley and to Austin, Texas (for At Berkeley [2013] and Boxing Gym [2010] respectively), and twice now to New York City (his previous film was 2015’s In Jackson Heights). It’s a cosmopolitan itinerary, and taken together these expansive and enjoyable late Wisemans are a far cry from the punishing confines of his first film, 50 years young in 2017, Titicut Follies, even if his methods remain similar. There is an apparent shift of emphasis away from social subjects and towards aesthetics and culture, though Wiseman would no doubt be quick to reply you can’t separate the two. Indeed, that is one of the themes of Ex Libris: how does Andrew Carnegie’s mission to bring knowledge to the masses hold up in the 21st century? Or to put it another way: is the library an anachronism in the internet age?

In fact, the New York Public Library has been at the vanguard of integrating e-books into the public lending system, and judging by the meetings we see here, the administrators are as focused on digital access as they are on books. “Three million New Yorkers don’t have broadband internet connectivity,” says Tony Marx, the Library’s president and CEO. “You can have all the content in the world but if you don’t have connection to it, it does you no good.” In response, the Library partnered with New York City to “loan” wi-fi itself, enabling hotspot access within the home for those families who can’t afford it.

Similarly, the Library has easily assimilated digital literacy as a natural adjunct to its traditional education programs, a service that is likely to remain in plentiful demand. Wiseman shows us people poring over books, to be sure, but also working on laptops and tablets, consulting smart phones and examining microfiches; adults nervously negotiating downloads; kids eagerly learning how to code. He shows career fairs, teen outreach projects, early learning classes, seniors in a dance class, book clubs, and civics lectures. Art students are introduced to the Library’s Picture Collection, a repository that has served and inspired New Yorker artists from Diego Rivera to Andy Warhol for nearly a century now.

But this, too, is only a fraction of what Wiseman finds. The modern library is also an arts hub, a platform for writer talks and panels, for poetry readings and recitals, an exhibition space for artists, a recording studio for audio books, an archive for academics and journalists, and a forum for all and sundry. Like La danse and the other recent films, Ex Libris affords the audience quite considerable spectacle: the pleasures of performance (the Double Entendre quartet, for example, pianist Carolyn Enger, and the poet Miles Hodges); celebrity appearances (snippets of on-stage interviews with Patti Smith and Elvis Costello); and stimulating discourse with thinkers like Richard Dawkins and Yusef Komunyakaa and Edmund de Waal. We get snippets from Love in the Time of Cholera, the Declaration of Independence twice over (angrily, and as an entreaty, both in sign language), a soupçon of Nabokovian erotica…it’s almost intelligentsia porn, except that these trimmings are interspersed with behind-the-scenes budgetary meetings, strategic planning sessions, and the hands-on work of filling shelves, filing records, and answering the phones (“The Gutenberg Bible is temporarily unavailable for viewing”).

It’s a broad tapestry by design. If the film’s branch-hopping seems to present the city in microcosm, the NYPL could also stand as a summation of 2,000-plus years of Greco-Roman civilization, the culmination of human thought to this point. Indeed, Richard Dawkins puts that idea on the table in the very first scene: “We are privileged,” he says, “to live after Einstein, after Darwin, after Newton, with brains big enough to comprehend [our own complexity].” Does Wiseman see a parallel with Dawkins when he identifies himself as “a lover of truth?” Probably. “Truth” is a word that crops up again and again over the course of the film. So too “poetry,” often in close proximity: “Science is the poetry of reality,” says Dawkins. “I wanted to write about the truth of our real time,” echoes Patti Smith. “And the truth of our time includes poetry and dreams…”

It’s very clear from his recent films that Wiseman cherishes art (even pugilism becomes a form of choreography in Boxing Gym). And if his work has concentrated on systems, networks, and process over individualism and psychology, there remains a strong current of humanism in his cinema, which has always been pluralistic and progressive to its core. Asked to what extent he considers his poetry political, Yusuf Komunyakaa talks about how the architecture of the work is inherently so. And that’s true for Wiseman too. The administrators at the New York Public Library espouse an old-fashioned liberalism, the idea that education is the key to overcoming inequality. Wiseman may admire the marble Victoriana of the Schwarzman Building, but he is not blind to the patrician legacy inherited by the overwhelmingly white board of directors (he cuts, wittily, from the board’s annual photo shoot to Hispanic teenagers taking selfies on the steps outside).

Race and the African-American experience is another critical thread running right through the movie. In one lengthy author talk, Ta-Nihisi Coates argues that Islamic voices espousing emancipation for the slaves were written out of history just as surely as white colonial governments’ implication in the slave trade has been downplayed. (There is also an admirably lucid explanation of the relationship between slavery, capitalism, Abraham Lincoln, and Karl Marx from an unnamed library staffer.) The film’s penultimate scenes are set in the Harlem Rivers branch, and touch on how a recent McGraw-Hill textbook blandly erased slavery from the topic of immigration by referring to African-American “workers” instead. Books still matter, and words too.

But Wiseman gives the last word to the artist Edmund de Waal, citing Primo Levi: “Method is interesting,” he says. “The value of looking and thinking about how an object comes into being as an idea…The manner of what we make defines us.” By these measures, the subtle and authoritative Ex Libris stands as the most diligent and the most cogent political film of the year.

Posted in CS72, Currency, From The Magazine