Escape Hatches: The Cabin in the Woods 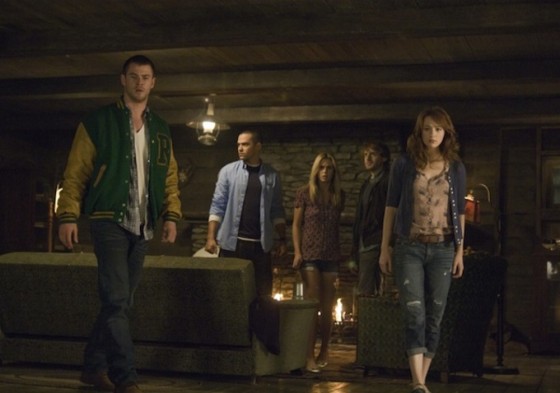 **SO, SO MANY SPOILERS BELOW**

It’s one thing to get a lesson in remedial spectatorship from a professional scold like Michael Haneke, whose films can sometimes feel like the cinematic equivalent of the headmaster ritual; it’s quite another when the lecture comes courtesy of Joss Whedon. His script for The Cabin in the Woods (co-written with the film’s director, Drew Goddard) examines the codes and conventions of horror films with a lepidopterist’s gaze—through a glass, smugly.

It’s impossible to further discuss The Cabin in the Woods—and what’s wrong with it—without heading deep into spoiler territory. The cold open introduces Richard Jenkins and Bradley Whitford (both great) as office drones in a massive subterranean facility. We quickly learn that they’re supervisors in an elaborate, money-is-no-object government plot to corral and kill a group of five American teenagers in a manner befitting a 1980s B-movie. (The Evil Dead [1983] jumps immediately to mind based on the eponymous locale). That this “blood sacrifice” is demanded by a clutch of inter-dimensional monsters who will trigger apocalypse if they are not appeased is supposed to be the film’s metaphorical ace in the hole. If the shirt-sleeved controllers manipulating their oblivious human quarries with a vaguely defined combination of special effects, hallucinogenic drugs, human collaborators and genetically engineered monsters are stand-ins for a film crew, the unseen elder gods are meant to represent the mass audience’s collective, unquenchable blood lust—a thirst that can only be slaked through the right combination of frivolity, familiarity and brutality.

And it should be said that The Cabin in The Woods is not an actual horror movie, starting with the fact that it isn’t actually scary, unlike Scream (1996), which went through its deconstructive paces without sacrificing shocks. In one of the script’s many “playful” (read: laboured) twists, it’s revealed that Dana and company must themselves (a la Gozer) choose the form of their destructor. Led into a creepy basement with an endless supply of artifacts that can act as triggers for an infinite number of killer scenarios, they end up activating the “zombie” routine. No amount of eye-rolling reaction shots from Whitley and Jenkins signifying the boringness of this selection (they were rooting for Death by Mer-Man) can alleviate the fact that it actually is a boring selection—and in many ways the path of least resistance for the filmmakers. Goddard’s staging of the shuffle-stalk stuff is strictly standard-issue, erring at all times on the side of caution. For a film supposedly catalyzed by the debased desires of dark forces, its gore is pretty discreet.

Of course, the perfunctoriness of the mid-film mini-movie where undead bogeys assault the cabin (very slowly) is also just a set-up for Goddard and Whedon’s next big reveal, when Dana and Marty find a door in the floor and breach the facility (joining the film’s two worlds) to find a massive, steel-and-glass holding area containing ghouls and creatures of all kinds. The idea of a menagerie containing all of our collective fears is original and richly suggestive, but the disarming graveness of the image gives way to an antic CGI blur as the supernatural inmates overrun the asylum, mauling their jailers in an all-out monster attack that isn’t so much without cinematic precedents as it is all those precedents slamming together at 90 mph. It’s an impressive sequence, but it’s flimsy compared to the titular critters’ rampage through a faux Trump Tower in Gremlins 2 (1990). Where that was a wry, Bret Easton Ellis by way of Chuck Jones portrait of (literally) rapacious ‘80s consumerism made cartoonishly monstrous, the centrepiece sequence in Cabin is simply a special-effects exercise that adds little to the underlying argument about the perils (both aesthetic and moral) of a genre cinema where everything is rigorously preordained. It also feels like a bit of a sop to the very audience that Whedon and Goddard start out— and end up—taking to task for wanting just these sort of over-amped money shots.

In Whedon’s writer’s-strike make-work project Dr. Horrible’s Sing-Along Blog (2008), the eponymous super-villain (played by a pre-over-exposure Neil Patrick Harris) achieves his goal of world domination at the expense of his dream girl, who becomes a casualty to a death-ray demonstration gone wrong. That threadbare, lovingly hand-made internet musical demonstrated most of Whedon’s strengths, most notably his ability to subtly up the dramatic stakes within a seemingly weightless scenario. He did the same thing in the early seasons of Buffy the Vampire Slayer, which smartly exploited their slick, post-Kevin Williamson teen-horror trappings while sneaking real dread in the back door. Even the underappreciated Serenity (2005), which built off of Whedon’s uneven TV space opera Firefly, embedded a cogent mass-cultural critique into its plot, which hinges on the revelation of mass-pacification techniques that end up yielding barbaric, homicidal behaviour—a good-natured jibe at the dangers of a homogenized television landscape.

Whedon is usually so good at shading inside the lines of his chosen generic milieux that it’s odd for him to commit himself to the kind of bigger-picture blueprinting represented by The Cabin in the Woods, unless perhaps he’s feeling pressure in his role as the young elder statesman of North American genre filmmaking to attempt so ungenerous a gesture as the final word on the state of his art. What else could account for Cabin’s most ostentatiously “powerful” scene, a carefully prepared set-piece where Dana is bludgeoned half to death by a hulking male zombie while, prematurely celebrating their “victory,” the controllers throw themselves a drunken party, turning a blind eye to the violence they’ve authored on their huge video monitors. The idea that Dana’s fear and pain suddenly and significantly exceeds the generic boundaries of the in-film initiative is sententious in the extreme, as is the fact that Whedon and Goddard absolve themselves of any exploitative impulses by hiding behind their parable’s rickety Lovecraftian undergirding: don’t blame us, blame the Elder Gods (i.e. you). Another major spoiler: when the monsters don’t get what they want, the world ends, which is a pretty good way of allegorizing this much-hyped production’s likely commercial fate once people realize it’s Funny Games for fanboys.

Joss Whedon, The Cabin in the Woods