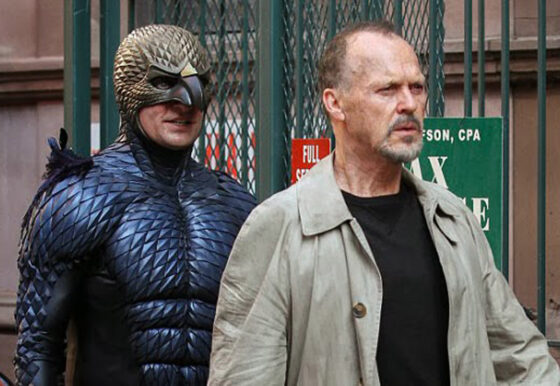 What could be a more appropriate fate for Alejandro González Iñárritu’s Birdman or (The Unexpected Virtue of Ignorance)—a slick film about a disgruntled director baring his soul and guts for unfeeling audiences and critics alike—than its doubtlessly smooth course to award-season glory? While the film is ostensibly an angry manifesto stumping for artistic integrity in the face of a pablum-peddling culture industry that’s traded Raymond Carver for Stan Lee—as well as an illiterate critical class unwilling or unable to cultivate its technical competency—Birdman’s squawk is all but neutralized by its tepid bite. Though it is self-righteously mean in its broad strokes (as all polemics inevitably are), Birdman is also—this being an Iñárritu joint—an overeager, conspicuously crafted art object whose virtuosity is matched only by its digestibility. Snottily sniping at everyone but the exact sort of people who will throw laurels in its path as it makes its victorious procession to the stage of the Dolby Theater in March, Birdman is as hybridized and compromised as its hero: an award-courting schmoozer that disingenuously sings the praises of difficulty.

Michael Keaton makes the most out of a rare lead role as Riggan Thomson, a Hollywood has-been whose franchise days as the titular superhero (sporting a gruff voice closer to Christian Bale’s Batman than Keaton’s own) are long over. Plagued by financial troubles, family woes involving his rehab-stinting daughter turned personal assistant Sam (Emma Stone), and petty jealousies toward professional rivals like Method actor Mike (Edward Norton), Riggan comes out swinging for one last shot at redemption on his own terms. Ignoring the nay-saying inner voice of his feathered alter ego (who confronts him, bristling at his pretensions, whenever he looks in the mirror), Riggan decides to stake what is left of his career on an attempt to direct and star in a lavish, potentially disastrous Broadway production of Raymond Carver’s short story “What We Talk About When We Talk About Love.”

If the incongruity between Carver’s punchy minimalist gem and Iñárritu’s incurably maximalist tendencies is intended as a joke, it’s the only one that has any teeth in this otherwise obstinately unfunny bid for blackly comic satire. While Iñárritu’s brute-force style—less an authorial touch than a two-handed shove—worked effectively enough for the unabashed melodrama and raging indignation of Amores perros (2000) and, arguably, the maudlin martyr’s fable of Biutiful (2010), little in his po-faced filmography up to now has suggested he has any particular knack for comedy—and indeed, Birdman’s tin ear is matched only by the straw men it sets up as the objects of its satirical scorn. Low-hanging fruit is the order of the day here: press-junket whores (“Is it true you’ve been injecting yourself with semen from baby pigs?” one scribbler asks of Riggan—immediately adding “It was tweeted,” as if the mere mention of social media signals vacuity), mouth-breathing, dirt-digging digital hordes (who retweet a blurry video of Riggan locked out of his own theatre during previews and marching past the ticket booth in scummy underwear), and, of course, snobby, old-guard critics, the frosty gatekeepers who would never deign to let novices like Riggan pass before they’ve paid their tithe in blood.

This last target leads to one of Birdman’s most questionable moments: while Lindsay Duncan makes a strong enough impression as austere, silver-haired New York Times theatre critic Tabitha to render moot the suspicion that this compact gorgon is a passive-aggressive swipe at Manohla Dargis, the sight of bullish Mike and sweaty Riggan—two serious dudes who suffer for their art—taking the diminutive critical doyenne to task for being risk-averse gives one pause. There are surely some who will argue that Tabitha is merely a projection of Riggan’s misogynistic, beta-male rage and artistic insecurity, and so it would be churlish to call Iñárritu to account for her representation here. Even if one accepts that, however, the problem is that Birdman, even in its late turn to magic realism, never gets formally unhinged enough to feel like a proper dream—the sort of delusional swan song a second-string actor turned egotistical director might cook up in a dressing room that, as per one of the film’s knee-slapping asides, “smells like balls.”

At best, Birdman is a wish-fulfilment fantasy in the micro-managed Wes Anderson mould, with Riggan’s dilapidated theatre subbing for The Life Aquatic’s hermetically enclosed submarine, its musty corridors arteries through which the assorted ciphers drift from one catharsis to another. And while Emmanuel Lubezki’s much-lauded swooping long takes—invisibly cut together to feel like one long, winding tour through Riggan’s dark night(s) of the soul—are a refreshing alternative to Iñárritu’s flashy narrative patchwork in 21 Grams (2003) or the hyperlinked, pseudo-mystical globe-trotting of Babel (2005), their gliding effect is eventually anaesthetizing. If Lubezki is clearly the film’s MVP, it’s a dubious honour in that his camera pyrotechnics are, ultimately, little more than the delivery system for the film’s banal, endlessly self-congratulatory script. For all its carping about the virtues of unfettered creativity, Birdman is little more than a rote confirmation of what middlebrow artists and prestige-charmed critics already believe: that a little formal bombast, shallowly conceived and laboriously, ostentatiously achieved, is all one needs to make great art.