Quintin/CS54, Currency, From The Magazine 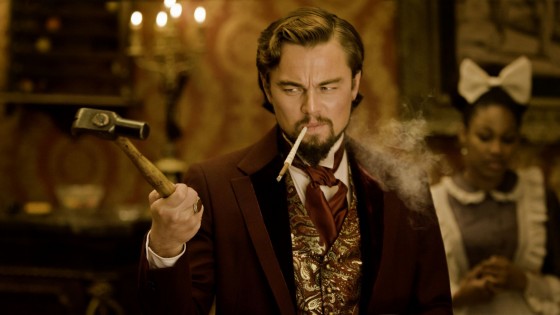 In one of the first scenes of Steven Spielberg’s Lincoln (2012), a black soldier stands proudly and defiantly in front of the President and, without technically overstepping the bounds of respectfulness, argues that African-Americans (it sounds ridiculous to use that term in this context, doesn’t it?) deserve pay equal to that of white soldiers in the Union army, as well as the right to become officers. He’s a Negro radical, so to speak, but this being a Spielberg film, true radicalism will ultimately be the province of white folks (Tommy Lee Jones’ abolitionist firebrand Thaddeus Stevens) whereas when the soldier departs the scene (and the film) Spielberg pointedly shows that he knows Lincoln’s speeches by heart; like his non-radical fellows, he’s waiting for emancipation rather than claiming it for himself.

By contrast, Quentin Tarantino’s Django Unchained, set two years before the Civil War that is drawing to its close at the beginning of Lincoln, has a super-radical black guy at its very centre. More specifically, Django is an avenger, which puts this new film well in line with the revenge motif that forms the core of Tarantino’s last four films as director—the two Kill Bills (2003-2004), Death Proof (2007), and Inglourious Basterds (2009)—even if Django is far less inspired or funny than the latter two. While all of Tarantino’s avengers have personal motives, the fact that all belong to a certain historically oppressed group—women, Jews, blacks—lends their revenge quests an extra dimension. So Jamie Foxx’s formerly enslaved gunslinger is not only out to settle the score with the men who sold, and bought, his wife Broomhilda (Kerry Washington): he’s that “one-in-a-thousand nigger” capable not just of liberating himself, but destroying white supremacy at its very foundation.

So is Tarantino, then, a political radical? His trash-talking of John Ford in interviews—calling him an overrated filmmaker, and a racist to boot—would imply that he has a strong political position. But I don’t think that even Tarantino takes these claims seriously, and even if he does it hardly matters, because Tarantino is a buffoon, one of the biggest in the history of American cinema. That doesn’t mean he is unimportant, however: his originality and his undeniable talent ultimately prevent us from dismissing him because of his frequent public clownishness. Indeed, a buffoon, and especially a talented buffoon, should be taken seriously precisely because not everything he says or does is serious.

The politics of Django Unchained seem rather clear-cut on the surface. King Schultz, an eccentric bounty hunter of German origin (played by Christoph Waltz, a great seriocomic actor and one of Tarantino’s happiest discoveries) purchases Django and promises him his freedom if he helps track down a trio of wanted men. Unusually sensitive, and progressive, for a professional murderer, Schultz confesses to Django that he feels guilty for participating in the repulsive economy of the “skin game” even though he intends to liberate Django at the end of their mission. So Schultz offers to take Django on as his partner, teaches the former slave to read, shoot and ride, and the duo go rampaging through the South, killing (white) wanted men until they arrive at Candyland, an elegant plantation ruled over by arch-villain Calvin Candie (Leonardo DiCaprio), who also happens to be the present owner of Django’s wife.

While Django and Schultz take great pleasure in killing the dozens of racist scumbags who cross their path—particularly a horde of proto-Klansmen led by the vile Big Daddy (Don Johnson)—they are not exactly fellows of notorious abolitionist John Brown, whose fervent disgust for slavery led him and his followers to undertake murder raids against Southern slaveholders. Their brand of righteous vengeance is rather more complicated: what they seem to hate in their victims is an innate vulgarity, a marked lack of refinement. Although Django and Schultz aren’t aristocrats, they consider themselves as belonging to an elite, far superior to the people they encounter in their travels. Tarantino’s characters often have a tendency for baroque speech as a way of distinguishing themselves from the mob; whether or not they’re of low origins, their way with words endows them with a particular kind of nobility. What Django and Schultz (and Tarantino) truly despise is white trash: the ignorant, moronic, and greedy men they encounter in the South.

Though the Francophilic Candie, with his impeccable dress and Continental affectations, initially seems to be a nemesis worthy of Tarantino’s heroes due to his sophistication and intelligence (not to mention ruthlessness), that illusion is quickly dispelled. Not only is it revealed that the true power behind his throne is his aged and cunning black butler Stephen (Samuel L. Jackson), but his florid use of French words, and his desire to be addressed as a French gentleman, belie the fact that he cannot actually speak the language. For Tarantino, that kind of pedantic pretentiousness is pure evil, and a part of the intrinsic wickedness of the South—a South that is symbolically blown to pieces at the end of the film when Candie’s mansion burns like Tara in Gone with the Wind (1939), with the difference being that none of this plantation’s white inhabitants deserve to live. Tarantino’s point of view is that of a Yankee, and a particularly Dixie-hating Yankee at that; beyond slavery, what Tarantino wants to see annihilated is Southern culture in total, a culture which he portrays as both incorrigibly corrupt and completely degenerate.

But Tarantino’s revenge is unique in that it is exerted within the territory of American film history, starting with The Birth of a Nation (1915), from which he swipes the ride of the Klansmen to make great fun of it. (The buffoon is at his best in this scene, displaying his contempt not only for the politics of racism but for the stupidity and ignorance of its supporters.) But Tarantino also goes outside of the American cinema to find his generic template, which is of course the spaghetti western, that eccentric strain of films that functioned as both homage to and parody of the classical American western. Tarantino uses music, actors, character names, plot points, and those weird, shaky zooms so endemic to those Italian movies, and then traces their exploitational example back to the American cinema that first inspired them by rehashing the black gladiatorial combats from Richard Fleischer’s 1975 Mandingo (a film which Tarantino has enthused about in interviews).

Tarantino’s big contribution to film history has to do with his predatory nature. Many filmmakers copy, quote, or otherwise use material from older films, with or without acknowledging the original source. But usually they take prestigious material; Tarantino favours those films, or entire genres, that film history has dismissed or neglected, like blaxploitation or spaghetti westerns or martial-arts films. By doing so, he performs his favourite operation, which is destroying hierarchies, putting everything on the same level. In Django Unchained, he attacks a seminal film like Griffith’s The Birth of a Nation, an ultrapopular one like Gone with the Wind, and the western itself, the most American of all genres. This kind of strategy is often regarded as a pop manoeuvre, but it’s more than that. Like Django, Tarantino is willing to destroy everything that crosses his path, and the result of such an attitude is a kind of inspired lunacy that keeps his films away from any kind of scholarly appreciation (not that he wants much of that).

But while this very particular kind of cinephilia brings an undeniable freshness to Tarantino’s work, it also has a paradox at its centre. By latching onto what is obscure or forgotten in film history and disavowing what has been canonized, Tarantino depends almost entirely on what was done before him while at the same time flagrantly not caring about it. Treating film history as a toy shop, where a Franco Nero may be somehow important and a John Ford thoroughly disposable, has perhaps a certain appeal in both its arbitrariness and its seeming freedom. But if hierarchies are not important, then, as a logical consequence of Tarantino’s own thought, his oeuvre is as superfluous as all the rest. In other words, who cares about Django Unchained?

Posted in CS54, Currency, From The Magazine