Did You Wonder Who Fired the Gun? (Travis Wilkerson, US) 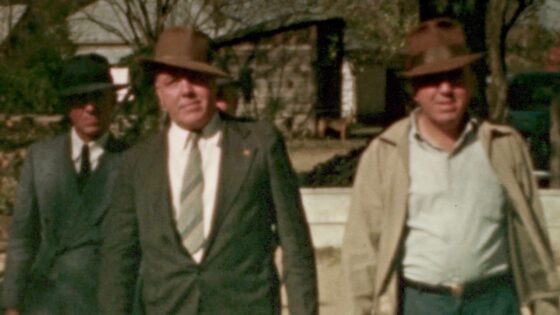 Throughout his artistic militancy, Travis Wilkerson has rooted his praxis in a confrontational understanding of American history and, most crucially, in the reactivation of its repressed radical passages. From the margins of the film industry, Wilkerson has frontally challenged its dominant procedures and manifestations. In his pamphlet-like films, political invectives of remarkable aesthetic integrity, theory, and practice are assigned the same emotional space; images are never corollary nor ornamental in relation to the narrative. Emblematic in this regard is his short National Archive (2001), possibly the only American film ever shot from the point of view of imperialism: the cockpit of a jet fighter. Wilkerson is an anomalous presence in “US indie cinema,” and his radical yearning possesses the urgent feeling of necessity.

Wilkerson has brought to the surface of American cinema a forgotten tradition of revolutionary politics that in pre-Occupy America was as familiar to younger generations as sushi is to a bedouin. Yet the incendiary historical junctures his films have reclaimed, far from being marginal or residual, constitute an untold epic, that of the wretched of the American Dream who have been omitted from the nation’s official chronicles. In An Injury to One (2002), possibly the most cogent example of Wilkerson’s idea of cinema, a film where form and content are plastically indivisible, the director traces the contemporary relevance of anarcho-syndicalism with a distinctly cinematic flair. Here lies the exceptional nature of his work: the refusal to conceive and make films as an isolated artistic activity with the world of cinema itself as its only referent. On the contrary, Wilkerson’s films are always traversed by extra-cinematic impulses and trajectories, even when exclusively dedicated to the seventh art and its protagonists (like his 2003 homage to Cuban filmmaker Santiago Alvarez, Accelerated Under-Development). Wilkerson’s ubiquitous voiceover, which often accompanies his visual harangues, rather than appealing to the subconscious—where persuasions of all sorts usually take place—isn’t afraid to address consciousness directly, and militantly, hence the accusations of didacticism and pedantry that have been levelled against his work. The legends of “objectivity” and “impartiality” have no place in the films of Travis Wilkerson.

Did You Wonder Who Fired the Gun? exhumes the horrors of the American Nightmare via an investigation of the filmmaker’s family history. A Southern Gothic agitka, the film tackles the exonerating myths of white liberalism as inscribed in masterpieces of democratic benevolence such as Harper Lee’s novel To Kill a Mockingbird, filmed by Robert Mulligan in 1962. Against the film’s protagonist, Atticus Finch, who the American Film Institute named in 2003 the greatest movie hero of the 20th century, Wilkerson tells the story of another American patriarch: his great-grandfather, S.E. Branch. While the fictional Atticus Finch defended a black man against fabricated rape charges, in 1946 the director’s forefather killed an unarmed black man named Bill Spann in the family’s grocery store in Dothan, Alabama.

It’s in the dilapidated streets of this town that Wilkerson’s camera starts meandering, looking for answers in what has become with time an uncomfortable family secret as well as one of the many unpunished crimes of white supremacy. Less interested in finding individual fault than in unveiling the systemic and all-too-familiar face of racism, the director’s investigation into the murder of Bill Spann operates on a symbolic level where the division between personal and collective responsibility is indeed porous. Tellingly enough, the family’s chronological demographics mirror that of the country at large, great-granddaddy Branch’s racism having given way to a liberal generation, with the exception of one aunt who has embraced white supremacy. However hideous it may be, S.E. Branch’s crime is part and parcel of a morphological and recurrent aspect of American life: prevarication camouflaged as self-preservation (of economic privileges rather than allegedly imperilled ethnic identities).

Though at times the director appears overwhelmed by the inherited guilt, the film remains legible as an indictment of the white middle-class family on which American mythology rests, and not only of Wilkerson’s own. The film’s insistence on identity politics can also be seen as problematic, as it distracts us from the structural nature of racism and the historical necessity of slavery for a system based on exploitation and economic growth. “Black” and “white” are often framed as sectarian entities rather than antithetical political attitudes (with the former standing for resistance and the latter for oppression). “Whiteness can incinerate a whole family,” declares the director near the film’s end, “give it enough time and it will incinerate the world.” Though “whiteness” may be intended as a symbolic category, especially when pronounced by a class-conscious filmmaker like Wilkerson, the film, for more or less obvious reasons, does tend to personalize and condense racism to its symptomatic manifestation (i.e., white versus black violence). As Wilkerson’s filmed investigation proceeds, S.E. Branch’s killing of Bill Spann turns out to possibly be one of the very many in a long list of unspeakable crimes. Thus the felonious nature of racism is identified with “monstrosity” while in fact it is an (un)official privilege that American democracy has granted white citizens ever since chained Africans were imported to the US as free labour.

The film’s propensity to associate racial hatred with moral depravity rather than with a semi-official, institutional practice can thus be read as slightly misleading. One thing capitalism proved to be over the years is to be colour-blind, while racism, rather than an inherently ethnic phenomenon, has been a geopolitical contingency in the ongoing history of exploitation. As long as racial equality is associated with unconditional access to the material benefits and comforts of white privilege, as opposed to its critical deconstruction, then the very basis of racism, which remains economic exploitation, will never be undermined. This is a foregone conclusion for a director like Wilkerson who, on this occasion, understandably affected by his personal involvement in the story he is narrating, seems to sacrifice political analysis in favour of an emotional duel with his family’s demons.

That being said, the film by no means replicates the reactionary banality and political correctness within which the discourse around race is conducted in the US. Did You Wonder Who Fired the Gun? digs deep into the metastasis of racial discrimination to expose how far into the fabric of society it reaches. At the same time, the film also reflects the luminous resilience of African Americans and the culture of resistance that keeps gleaming against all odds from the southern darkness of a land founded on genocide and infested with ghosts. To the deforming repugnance of bad blood the director opposes the resolute dignity of the black struggle, unveiling the revolutionary essence of people like Rosa Parks whom white liberalism has ossified into innocuous icons. Before the 1955 Montgomery bus boycott, Rosa Parks had in fact been an active and fearless anti-rape campaigner in Alabama, where white-versus-black sexual violence was virtually law-enforced.

One such heinous episode is recounted by the civil-rights activist Ed Vaughn, whom the director interviews as part of his cold-case murder mystery. While nothing decisively relevant is disclosed on record by Vaughn as far as S.E. Branch’s killing of Bill Spann is concerned, through him we get to hear a piece of ordinarily heroic black history that constitutes a counter-narrative. This is a history that keeps repeating itself in the form of tragedy, as the calligraphic visualization of Janelle Monae & Wondaland’s militant anthem “Hell You Talmbout” reminds the viewer at regular intervals. That the murder of Bill Spann went unpunished, its tribunal records lost unlike those of the “greatest movie hero of the 20th century,” is only fitting, and fatally so. Did You Wonder Who Fired the Gun? ultimately shows that rather than “who,” what we should be asking ourselves is “why.” The answer pertains to collective rather than individual responsibily, which ultimately has very little to do with guilt.