Death of the Author: The Ghost Writer 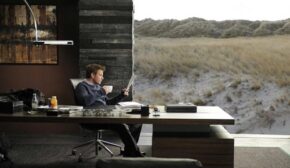 “Did you notice anything suspicious?” asks a sign posted inside a ferry in The Ghost Writer. Well, of course you did: this is a Roman Polanski film after all, and the near-octogenarian auteur is peerless when it comes to grinning intimations of conspiracy. The film, which won Polanski Best Director in Berlin and made a clean sweep of the European Film Awards, remains one of 2010’s very best, suffused with a sense of menace that’s both comic and cosmic. An abandoned car being deliberately towed from a ferry; a gardener futilely gathering leaves on a windy day; a body dredged up in the surf; doors pulled suddenly closed; grey skies forever on the verge of storm…a better question might be if there’s anything that doesn’t seem dodgy.

Faithfully adapted by Polanski and Robert Harris from Harris’ novel (just as Rosemary’s Baby [1968] hewed closely to Ira Levin’s prose), The Ghost Writer concerns, and is named for, a professionally self-effacing scribe (Ewan McGregor) who accepts a high-paying gig touching up the memoirs of former British PM Adam Lang (Pierce Brosnan). He’s been tapped since the previous hire “accidentally” drowned while off duty (cue ominous music courtesy of Alexandre Desplat, having a high old time). Lured to watery Massachusetts (exteriors were actually filmed in Germany, with ace production design by Albrecht Konrad), where the ex-politico is ducking allegations that he had authorized the extraordinary rendition of terror suspects during his time in office, the “ghost” finds himself entrapped by his client’s inner circle—all of them witches, as it turns out.

Actually, McGregor’s nameless character splits the difference between Rosemary Woodhouse’s watchful anxiety and Jake Gittes’ acid cynicism. Except that The Ghost Writer is finally an even more cynical film than Chinatown (1974), which at least allowed its wounded hero a brief flickering of idealism before snuffing it out. As the intrigue mounts around McGregor, his desire to get to the bottom of things is borne entirely out of the survival instinct. “You can’t drown two ghost writers, for God’s sake—you’re not kittens,” chides another character when told of McGregor’s fears, but Polanski’s mise en scène has its own ideas about what curiosity will do to the cat. McGregor is in nearly every shot of The Ghost Writer, and when he’s not isolated inside Pawel Edelman’s sneakily deep compositions, he’s surrounded by looming figures or furtively glancing out windows or windshields for signs of pursuers.

Glass is a major motif in The Ghost Writer. Lang’s American bunker is one of the great recent movie sets, a steel-grey modernist monstrosity adorned with abstract art pieces that resemble bloody Rorschachs (“Worth Killing For?” implores a poster in the building’s communications centre). Most striking, though, are the hugely scaled glass windows in the office space, which give the impression of the landscape bearing down on its inhabitants. When Lang bows his head and pushes against the glass, it’s like the weight of the world is literally on his shoulders. (It’s also an authentically Langian composition). The visual joke, which never stops being funny, is a play on the idea of “transparency”: McGregor has an unobstructed view on guarded people with opaque motives.

With this in mind, the actors play it close to the vest. As Lang’s evidently long-suffering wife, Olivia Williams is aggressive where McGregor is recessive: they’re great in their scenes together, especially a pair of visually rhymed long-take walks along the beach, one with a conspicuous security detail, the other in hard-won privacy (“If I meet any terrorists, I’ll text you,” she scoffs at her bodyguard). 2010’s cameo MVP Eli Wallach puts in as appearance, cast, as in Wall Street: Money Never Sleeps, as a gnarled sage; asked about Lang, he says “seems intelligent—so why did he go get himself mixed up with that damn fool in the White House?”

Lang is a more telegenic stand-in for Tony Blair, obviously, and the veil is draped just as thinly over the weapons-producing corporate monolith—“Hatherton,” with its logo of arms greedily encircling the globe—revealed to be pulling his strings. But Brosnan doesn’t let the script score too many points off of the character: given a late speech about the necessity of excessive security measures in a post 9/11 world, he invests it with resolve heretofore unseen in his image-conscious yet privately vulpine rascal.  In a more broadly villainous vein, Tom Wilkinson is something like a flesh-and-blood equivalent to the film’s geographic sleight-of-hand: just as Polanski’s jerry-rigged New England is at once exaggerated and indistinguishable from the real thing, so too does the well-cured British ham, as in Duplicity (2009), slyly stylize himself into a recognizable caricature of corporate American villainy. I’m not sure that Kim Cattrall’s less convincing attempt at a British twitter (despite her British heritage) is another self-reflexive gag, but I’m inclined to give her—and Polanski—the benefit of the doubt, especially given how much fun the film has with location: after finding out that the Hague has it in for him, Lang learns that the US is the only place he’s welcome (he’s even greeted at the airport in Washington by a smiling Condi Rice manqué).

Most critics insisted on reading Lang’s extended house arrest as a mirror of the conditions under which Polanski produced The Ghost Writer. To make a long story short, recall that the film’s production was troubled by the director’s September 2009 arrest in Switzerland, whose government ultimately denied American extradition requests. Certainly, a scene where a goon rifles through McGregor’s personal effects (“Hey! That’s private!”) and shots of a motorcade under assault (“Some peace protestors are trying to kill me!”) hint in this direction, as does the plot point (carried over from the book) that finds Lang holed up in house as his reputation is assailed from all sides. Upon further reflection, though, it seems that if The Ghost Writer is a “personal” film, it may have more to do with Polanski’s feelings towards his métier than his media profile. When asked by his publisher (a bald and ferocious Jim Belushi) what he’ll bring to the project, McGregor answers “nothing”—which is exactly what the bottom-line-conscious employer wants to hear. Nobody cares about a “personal” touch in mass-market entertainment, a point driven home by shots of a printing press turning out countless copies of a golden tome called  (à la Bill Clinton’s autobiography) My Life, written by somebody else. A final indignity: McGregor isn’t even invited to his own book’s launch party.

Seen this way, the film is more of a cautionary tale about the compromises of working inside a system (publishing-as-filmmaking) than a political critique or Roman à clef. The moment when “the ghost” decides to ask questions about what it is that he’s actually producing—or, more accurately, abetting, in that his text is the cover up for the real story—is also when his fate is sealed. For all the delight that Polanski takes in putting this hack-for-hire through the wringer, he also entertains the possibility that valuable information can be smuggled through in a popular format, albeit in a highly coded manner (Harris’ penultimate text-based twist, which ironically recalls Rosemary Woodhouse’s Scrabble-based epiphanies, is at once goofily satisfying and thematically apposite). The ultimate revelations in The Ghost Writer—that corporations and intelligence agencies are the true power behind the throne—surely aren’t jaw-dropping. What sticks during the virtuoso final passage—highlighted by two great, unabashedly Hitchcokian shots describing the movement of paper (a passed note and a dispersed manuscript)—is the suggestion that, in the midst of even the most elaborate machinations, the truth is out there in plain sight. The question is whether we can get our hands around it, lest it be lost to the wind.