Daughters of the Dust (Julie Dash, US) 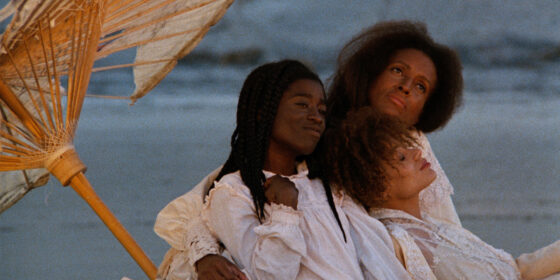 It arrives as both throwaway moment and photo-historical anachronism: dozens are adorned in white on a sand dune, whiling away the hours before dusk; a girl is passed a 19th-century stereopticon, brings it to her eyes, and sees images in motion—glimpses of a city on “the mainland,” an urban environment of horse-drawn carriages and mustachioed street salesmen. Theirs are the only white faces to appear in Julie Dash’s ensemble psychodrama Daughters of the Dust, which centres on the women of the early-20th century Peazant family, Gullah people based in South Carolina’s Sea Islands, descendants of “saltwater Africans” believed to have been captured from West Africa. The film sees the clan assemble for a celebration on the eve of a northward migration, but the moment’s optimism finds itself tested by Nana Peazant (Cora Lee Day), who refuses to leave the home village in Ibo Landing. Daughters voices (if not entirely embodies) conflicting sentiments between two narrating generations: Nana is one, the other is an unborn child (Kai-Lynn Warren)—visible through a camera viewfinder, but not to the naked eye—who dips in and out of the story as if to bedevil its turn-of-the-century rationality.

After a decade-plus of grant-funded research, Daughters was shot on location over three weeks at a cost of $800,000, the bulk of that funding provided by PBS’ American Playhouse, who kept broadcasting rights but had no theatrical distribution apparatus. (With its labyrinthine narrative and thick dialects, Daughters is perhaps the furthest-out of American Playhouse’s impressive features lineup, which includes Victor Nuñez’s A Flash of Green [1984], Gregory Nava’s El Norte [1983] and Joyce Chopra’s Smooth Talk [1985].) In a Los Angeles Times interview, Dash said she “wanted to take the African-American experience and rephrase it in such a way that, whether or not you understood the film on the first screening, the visuals would be so haunting it would break through with a freshness about what we already know.” Indeed, every tracking shot and languorous zoom in Daughters carries a psychic weight; this is “poetic” or “lyrical” filmmaking from when cameras were heavier and apertures smaller, before entire movies were shot on Steadicam (a camera language that may have long since oxidized itself from long-take overexposure and the lure of infinite non-linear editing.)

If Dash and cinematographer Arthur Jafa found themselves under pressure to counteract several centuries’ worth of historical erasure in the space of 110 minutes, it doesn’t show. Each of the women comprising Daughters’ beachside chorus must negotiate their own relationship to the departing/arriving family heritage, in terms either interior or verbal (via the film’s call-and-response monologues). While Nana is suspicious of abandoning the traumas of slavery, Eula Peazant (Alva Rogers), pregnant with the unborn child, comes to see her grandmother’s ideal of a “pure woman” as just that: something that never existed in Ibo Landing to begin with. Dash stated in multiple interviews that she had the impending century on her mind while making Daughters: Eula’s unborn daughter quite literally functions as a medium, a next angel of history, brokering visions of past and present. Dissension between sound and image can at times produce a nagging question of a bigger story left in what the Peazants call (with a laugh) “scraps of memories:” when one of the sisters rides off with her lover on horseback in the film’s final minutes, a bereaved relative wails in anguish by the boat.

At risk of viewing Dash’s film through a cinephilic lens, Nana makes a fascinating inverse of Jo Van Fleet’s Depression-era matriarch in Elia Kazan’s Wild River (1960), another hardened survivor who refuses to leave her island community—this time, in the face of a Tennessee Valley Authority dam project repped by a typically hapless Montgomery Clift. What forges Nana’s onscreen character is not the rugged individualism eulogized by Kazan’s period melodrama, but a tragic pessimism that can be traced back to the land itself, and the markers/memories of slavery. The deep indigo staining the characters’ fingers in Daughters’ first half saturates the entire frame in later passages, a seductive leitmotif for a whole generation’s retention of the memory of hardship.

Daughters damns precedent altogether, sidestepping the broad strokes of African-American history familiar from so many textbook historical dramas set during the era of antebellum slavery or the ’60s Civil Rights Movement. With its Tempest-like invocations of wrathful waters (the Sea Islands were subject to a punishing hurricane nine years before Daughters takes place, and they were hit by Hurricane Hugo in the middle of Daughters’ shoot), the film also fits alongside quincentennial reconsiderations of Columbus’ arrival to the Caribbean. Bryan Springer’s documentary Spin (1995) briefly details a New York news channel’s attempt to interview a Cherokee Nation historian about Columbus, only to abort the segment after he mentions Columbus’ tenure as governor of the Hispaniola colony—a period when thousands of indigenous islanders had their hands chopped off for failing to bring gold to their Spanish overseers. (Ridley Scott’s 1492: Conquest of Paradise [1992] reallocated these despicable acts to a snivelling peripheral villain played by go-to bad guy Michael Wincott, exonerating Gerard Depardieu’s Columbus as one of history’s decent guys who happened to be in the wrong place at the wrong time.)

In a 2014 discussion with bell hooks, Jafa called Steve McQueen’s 12 Years a Slave (2013) “an abomination,” and stressed the need for a black gaze measured by something other than its proximity to white power or the traumas of antebellum slavery. Like her contemporaries Haile Gerima and Charles Burnett, Dash has always strived to make films that do not equivocate in positioning themselves against what she called, in a 1979 interview with UCLA’s The View, “external statements” about blackness or the lived experience thereof. Her extraordinary short film Illusions (1982) shows a day in the life of Mignon Dupree (Lonette McKee), a mixed-race Hollywood executive passing for white during World War II. While her attempt to get her boss interested in a film about US soldiers using Navajo code talkers fizzles, an unctuous white officer threatens to expose her after she declines his advances. Mignon’s rebuttal is nothing short of a manifesto:

“See, lieutenant? I never once saw my boy fighting over there for this country, on film in a picture. Making this country. Because your scissors and your pacing methods have eliminated my participation in the history of this country! And the influence of that screen cannot be overestimated, do you understand me?”

If extra-literarily literal, the speech is of a piece with the ’40s tropes Dash employs to weigh Illusions’ plotline against its subtext—against Mignon’s inner world altogether. Illusions uses the hoariness of studio-era filmmaking to interrogate several preconceptions about popular entertainment behind closed doors, and the failed promises of postwar progress. Even if Mignon’s code-talker movie did eventually get made (in the unfortunate form of John Woo’s Windtalkers [2002]), Dash conceded to filmmaker Yvonne Welbon in 1991 that it was highly unlikely for a black woman of Mignon’s power to ever exist in Hollywood, either then or five decades later.
Just as Daughters is at once a foreign film that’s inalienably American, Dash’s screenplay allows the camera eye to visit overlapping spaces in memory and space in fell swoops—per Eula, a cathartic recognizing of a lineage that has made it possible to “see in more ways than one.” This refractory idea is interrogated even more sharply in the 30-minute dance film Praise House (1991)—made by Dash with the group Urban Bush Women for Twin Cities public television just after Daughters—wherein a young black woman literally convulses at her mother’s gravesite, possessed by the burdens of history and consoled in performances that span three generations of hardship. As with Daughters, what’s political about these images is the void of cinematized memory against which they cushion themselves: Dash’s feature debut is that rare “history film” that knows images lie, yet provides a wealth of them anyway. The scads of repertory packaging aligning Dash’s film with Beyonce’s Lemonade provoke a fascinating conundrum: if we are seduced by these Tumblr-ready tableaux at the behest of the film’s text, everything that was radical about Daughters of the Dust in 1991 will remain so upon its re-release.