Currency | Up in the Air (Jason Reitman, US) 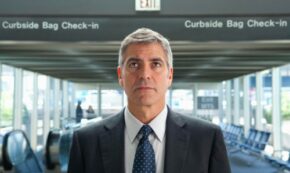 Like Tony Gilroy’s Michael Clayton (2007), Up in the Air casts George Clooney as a crinkly-eyed corporate bogeyman—specifically, Ryan Bingham, a “transition counselor” who racks up frequent-flyer miles travelling cross-country to various white-collar companies and firing their employees as a courtesy to confrontation-averse middle-managers. And, like Michael Clayton (which, it should be said, is a much better film), it errs—and ensures its commercial success—by foregrounding its protagonist’s existential dilemma over the consequences wrought by corporate rapaciousness.

Of course, Up in the Air makes a show of taking the latter topic seriously. Much has already been made of how co-writer/director Jason Reitman—whose heartening ascent to the Hollywood A-list is a true case of talent winning out over privilege—chose to integrate footage, gleaned during pre-production, of honest-to-goodness fired Americans recreating and reflecting on their dismissals into his adaptation of Walter Kirn’s novel. His reasoning was that the scripted scenes of downsizing felt “inauthentic,” and on this count, he’s correct: the scene that introduces us to Bingham and his brand of verbal fellatio (“anybody who has ever changed the world or built an empire has sat where you’re sitting right now”) loses most of its sting when we see that the guy being shit-canned is that furry dude from The Hangover (Zach Galifianakis). Hopefully, the real folks in the movie, who were initially told that they were participating in a documentary on job loss, will appreciate seeing their tales of economic distress used to lubricate a tidy narrative about the romantic tribulations of the privileged.

This is one of several insulting notions on display in Up in the Air; another is the idea that Clooney’s Bingham is a principled practitioner of an ugly craft, positioned as an emblem of old-school, look-‘em-in-the-eye professionalism against Anna Kendrick’s straight-out-of-grad-school striver Natalie Keener (yes, that’s the character’s name), whose new firing-by-teleconference initiative threatens to make him obsolete. Because this is a studio comedy, Bingham is instructed by his boss (Jason Bateman) to take the stats-spouting young tyro on the road, so that they can play Devil’s Advocates to each other’s worldview and, of course, form an unlikely bond. Because this particular studio comedy happens to be uncommonly offensive, the proof of Bingham’s essential nobility and paternal devotion to his protégé—who is revealed, naturally, to be a screwy naïf who lacks the stomach for her brutal occupation—comes when he lies to Bateman about her possible culpability in the post-layoff suicide of one client’s employee, who had earlier calmly informed Bingham and Natalie of her intention to jump off a bridge. After Natalie quits the company in distress, Bingham writes her a glowing letter of recommendation, claiming that any employer would be lucky to have her. And why not? She’s displayed little aptitude for her job, her “revolutionary” program lies in ruins, and she has bravely abandoned her post without owning up to what was said on her watch.

This scene comes late in a film already close to fulfilling its quota of offensive manipulation, such as a bit featuring the great J.K. Simmons as a terse downsizee inexplicably mollified by Bingham’s claim that his ejection from his deadening office job offers him the chance to make a fresh start with his true love, French cooking (Bingham’s feeble advice, it must be stressed, is definitively not played for laughs). But it is still genuinely shocking for what it suggests about the filmmakers’ attitudes towards personal accountability. A more honest, less expedient film might have framed Bingham’s voucher for his ex-colleague as proof of eroded ethics, or even as an attempt to cover his tracks (he was, after all, in the room when the woman made her threat). But Reitman, whose glibly pandering “satires” are consistently filtered through a thick sludge of sentimentality—which is what makes both Thank You for Smoking (2006) and Juno (2007) so uniquely enervating—positions it as the crowning moment of a redemptive arc that also includes Bingham’s increasingly dangerous closeness to his comparably jet-setting paramour Alex Goran (Vera Farmiga) and an Alexander Payne-ful interlude where he plays saviour at his sister’s budget-lodge Wisconsin wedding. (Besides offering us Danny McBride’s latest variation on lovable oafdom as Bingham’s dumpy brother-in-law-to-be, this segment also features a hilariously ostentatious handheld zoom meant to signify raw emotional truth in Rachel Getting Married [2008] mode.)

Granted, Bingham’s rehabilitation does not engender a happy ending: in a less-than-surprising twist, it’s revealed that his seductively callow fuck-buddy, set up as his commitment-phobic mirror image (“I’m you with a vagina”), has been hiding a family in Chicago all along. But Up in the Air never truly risks breaking the spell of movie-star identification, or undercutting the audience’s vicarious pleasure in same. It’s not a compliment to say that Clooney, who is often at his best when eschewing vanity and acting against his star persona, looks positively sanguine miming executive-class largesse. Nor to point out that Reitman’s “touch” (such as it is) feels surest when the camera is plunked down in airport lounges and hotels, taking in the anodyne textures and prominently displayed corporate logos with second-nature ease.

In the film’s final scene, Bingham—who has attained his dream of accumulating 10 million frequent-flyer miles and an ultra-exclusive customer-service card bestowed upon him (in perhaps the film’s most gobsmacking mismanagement of tone) by the familiarly bewhiskered countenance of Sam Elliott—stands in front of a massive airport monitor. Tired of his job and rejected by his lover, he is a man entrapped by freedom, weighed down by his very lack of baggage. (Baggage is one of this airport-culture film’s more laboured metaphors: at one point, Bingham, who supplements his income through motivational speeches about the literal and figurative benefits of travelling light, struggles to fit a cumbersome cardboard cut-out of his family members into his tightly packed carry-on.) We’re thus meant to pity poor Bingham when he tells us, via voiceover, that he’s resigned to being a lonely point of light in the sky, passing over the homes of those with more settled—and, it’s implied, more fulfilling—lives. But it’s likely that a vast majority of audience members—or for that matter, those laid-off interviewees, who are shrewdly (and repulsively) reintroduced in a concluding montage expressing the comfort and inspiration provided by their friends and families—would gladly accept an extended sojourn in such a nicely gilded purgatory.

Already, Up in the Air’s supporters (and there are more than a few) have talked about its “timeliness,” and how it taps into the cash-strapped zeitgeist. Leaving aside the laziness of such patently obvious proclamations (the same could be said about the welfare-porn of Precious), the fact is that Up in the Air actually does get at something deeper: the expert calculations of those preferred customers who cruise smoothly above the economic turbulence below and seek to profit (in dollars and Oscars) from a slickly produced fable about how all the money in the world is no substitute for richness of spirit and the warmth of hearth and home. How nice of them to share. According to a recent interview in the Los Angeles Times, Reitman considers this his “most personal film to date.” What does it say, then, that it’s shallow and disingenuous garbage?